Which are the leading resources for children looking to learn robotics? We tell you in this blog post

If your kid wishes to learn robotics, here are some of the best resources he/ she can check out to get that head start… 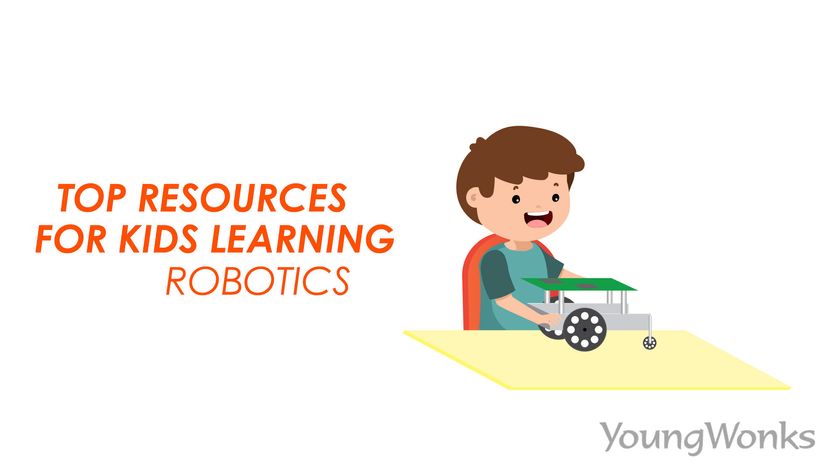 Does your kid show a keen interest in making things from scratch? If yes, you may want to check if he/ she wishes to learn robotics. Yes, you read that right. There may have been a time when robotics was to be pursued only by those going to college and older. That is, however, no longer the case. Kids today are increasingly veering towards learning about computer science, coding and robotics even while in school. Working on robotics helps kids develop creativity and learn about teamwork, leadership and problem solving among groups. This in turn encourages their interactive spirit. Today’s kids learning robotics are STEM problem solvers of tomorrow!

Shared below are some top STEM learning resources - including educational websites. courses and toys - that kids can look at to learn robotics; they have been shared in alphabetical order:

Botball is an educational robotics program created to help engage middle and high school aged students in team-oriented robotics competitions. Thousands of children and young adults take part in the Botball program, which has been around since 1998 and features a robotics curriculum. The curriculum in turn focuses on designing, making and programming autonomous robots. There’s a standardized kit of materials that has to be used while competing in the tournament.

Ideal for children in the age group 7-12, Engineering And Robotics Learned Young (EARLY) is a robotics program that offers kids the chance to design and create robots even as they take part in robotics competitions such as Vex Robotics, Botball, FIRST LEGO League. The competition robots are built from LEGO’s Simple & Powered Machines Sets. Once students have completed some of the Simple & Motorized Mechanisms activities, those who are interested are invited to join the EARLY team.

Offered by Future Learn in collaboration with The University of Reading, UK, Begin Robotics is a four-week free online robotics course. It teaches robotics to kids by letting them get acquainted with the history, anatomy and intelligence of robots and then having them build robots with exciting simulations. Also fascinating are its sections on cybernetics and robot control. With only three hours of weekly study, this course is a good start for kids looking to start learning robotics.

A well-known non-profit educational organization, Khan Academy offers free, world-class education for anyone and anywhere through its bank of instructional videos and practice exercises and the range of subjects covered is a wide one as it includes computer programming, math, science and robotics. The robotics curriculum includes video lessons on home-made robots, Lego robotics, overlap of robotics with electrical engineering, and building ant bots and spider robots.

Learning robotics doesn’t have to be all work and no fun. If anything, it can be incredibly exciting. For instance, the LEGO Mindstorms Robot Inventor line of products has some impressive robot kits that let kids work with not one but five different robot designs. Moreover, the toys come with an app that shares more than 50 activities with the robots. You can easily buy these off Amazon as well.

A visual, drag-and-drop platform based on the Scratch programming language, mBlock is slightly more advanced than the Scratch platform and is a good resource for middle schoolers. Kids can use it to create games and animations and code robots and boards. It also lets students switch between the visual language and Python.

Nasa is a rich resource for kids learning robotics. On offer are K-12 lesson plans designed to introduce students to robotics, particularly in the context of space exploration. There is also a large collection of challenges, competitions, projects and informational videos on robotics.

The website RootSaid offers free video tutorials on coding for those just starting out in robotics. It is particularly useful for those looking to soak in knowledge about basic robotics right from an early age. It also has a lot of Arduino projects one can work with; many share a step-by-step guide to getting things done.

Robotics for Kids by STEMpedia

STEMpedia is offering a free online course called Robotics for Kids – Level 1. Created by industry experts, it is said to be ideal for middle school students. Be it assembling basic mobile robots or making a smartphone-enabled robot, the course is fairly comprehensive. And it comes with some fun DIY robotics projects for kids who can work on them at home even as they learn robotics under parental supervision.

This American consumer robotics and toy company is well known for its products Sphero SPRK+ and Sphero BOLT. These transparent rolling robots for kids make for good STEM toys, but the latter is an upgrade on the former. In fact, Sphero BOLT is an educational robot that comes fitted with programmable sensors including  light sensor, gyroscope, accelerometer, motor encoders, and infrared communications. It has been created to teach children (aged 5 years and above) how to code using the mobile app. Moreover, its built-in compass means kids can easily program BOLT to follow real-world directions on a map. Additionally, they can program their robot using code to show characters, vector graphics, sensor data, or play games on the BOLT’s 8x8 LED light matrix itself.

Botley the Coding Robot is a useful robot toy for kids who have just started learning coding.  It comes with a rather comprehensive 77-piece activity set, a remote programmer, detachable robot arms, 40 coding cards, 6 double-sided tiles, 27 obstacle building pieces and a starter guide with coding challenges. Kids can make Botley perform a variety of functions including detecting objects and moving around them (with if/then logic), navigating obstacle courses and following looping commands and black lines. The fact that it is 100% screen free means it can be used by kids as young as 5 years old and not just older kids.

Tynker provides both free and paid code curriculum for kids ages 5 to 14+. The curriculum uses games, lessons and tutorials to teach students the basics of programming, app development, creating games, websites, animation and even robotics. So kids here get to hone their robotics knowledge and programming skills.

When it comes to robotics, one cannot not mention VEX Robotics. A robotics program for elementary through university students, it aims at promoting educational robotics for everyone. Their educational robots / robotics kits have been designed to cater to kids with formal and informal education. Also well-known are the VEX Robotics competitions and programs.

Also worth a mention is the mobile app Wonder for Dash & Dot Robots. Built by the guys at the California-based robotics company Wonder Workshop, this  app teaches robotics to kids in a fun way. Ideal for kids aged 8 years and above, it offers more than 300 challenges covering both building and programming robots. So using the app, kids can make their own robots, update their features, and test their simulations. This way kids get hands-on experience of critical thinking and problem-solving.

California-based YoungWonks Coding Classes for Kids boasts a cutting-edge curriculum that draws from the latest software (including Machine Learning) and the latest Internet of things (IOT) hardware to help its students create new programs and build cool robotics and automation projects.  Students pick up coding skills by learning programming languages such as Python and JavaScript; they then use them with off-the-shelf electronics hardware; think IoT devices such as Raspberry Pi, Arduino, ESP8266 and Teensy, thereby displaying their newfound STEM skills. They also learn how to use sensors such as cameras, infrared sensors, ultrasonic sensors, accelerometers and gyroscopic sensors. With excellent coaching from qualified educators, it is not surprising to see that YoungWonks student achievements include first prizes at the RoboRave International 2018, RoboRave California 2018 and RoboRave US National 2017.