What is A Microprocessor And What Are Its Applications

Leading brands of microprocessors today and which devices are they used in? This blog tells you all this and more

What are microprocessors, what are their functions and their uses across several types of devices today 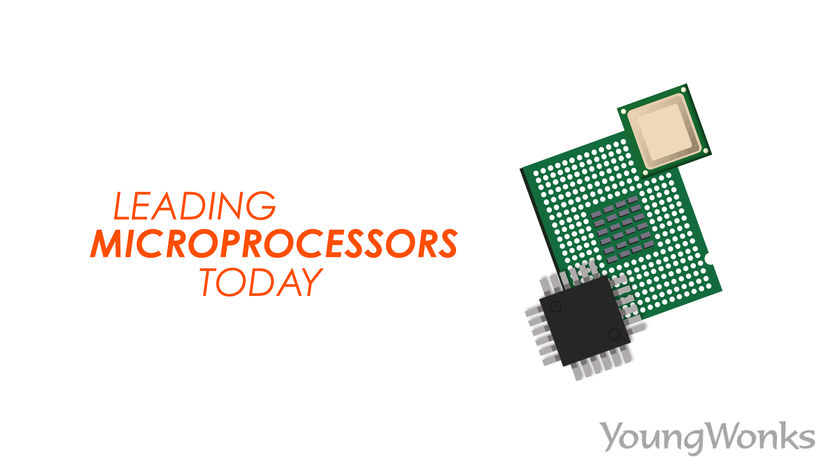 What is a microprocessor? At a time when our lives are becoming increasingly tech-centric and thus tech-dependent, it is important that we take a close look at this key component. After all, be it computers, laptops and smartphones or smart home devices, gaming consoles and self-driving cars, they all have microprocessors built into them. In fact, it’s the microprocessors that make these devices function. In this blog, we shall be talking about microprocessors, their uses across industries and the biggest names in each category.

What is a Microprocessor?

Typically, integrated circuit processors are manufactured in large numbers by highly automated metal-oxide-semiconductor (MOS) fabrication processes, resulting in a low unit price. Single-chip processors increase reliability since there are fewer electrical connections that could fail. And while microprocessor designs and capacity are constantly improving, the cost of manufacturing a chip (with smaller components built on a semiconductor chip the same size) hasn’t varied that much. This too has added to the popularity of microprocessors.

And it explains why other forms of computers have been rendered almost completely obsolete. Microprocessors are a mass storage device and they are also an advanced form of computer, which is why they are also called microcomputers. The availability of low cost, low power and small weight, computing capability makes these microprocessors greatly useful in several applications. One or more microprocessors are used today in everything from the smallest embedded systems and handheld devices to the largest mainframes and supercomputers. Microprocessor-based systems are thus found everywhere today and not just in computers and smartphones: in automatic testing of products, speed control of motors, traffic light control, communication equipment, television, satellite communication, home appliances, such as microwave oven, washing machine, gaming controller, industrial controllers and even specialised applications such as military applications.

We shall now take a look at the leading microprocessors across four key categories:

Today, handheld devices - this includes smartphones, tablets, portable media players - have rather powerful microprocessors, so much so that they can compete with a desktop computer. And processors are these days are coming up with more cores. Initially, processors were single core, followed by two cores, Quad-core, Hexa-core, Octa-core and now even Deca cores. Most processors nowadays are 64bit. With Graphics Processing Unit (GPU) being included inside mobile processors, these devices can now offer high quality graphics, Virtual Reality capability, 3D capability and 4k recording, plus the improved processor technology means greater power efficiency.

Leading manufacturers under this category are MediaTek and Intel. All chipsets made by MediaTek, a Taiwanese System on Chip (SoC) manufacturer, boast 64-bit architecture by ARM, the British semiconductor and software design company. ARM assembly code is composed of many small instructions instead of fewer but more complex instructions, and ARM does not have any unnecessary or complicated features, making these chips simpler to build.

The latest MediaTek SoCs supports up to 3.0GHz speed and there’s a wide array of cores on offer, be it Dual-Core (2 core), Quad-Core (4 core), Hexa Core (6 core) and Deca Core (10 core). It is not surprising then that MediaTek chipsets are mainly used by Chinese smartphone makers. MediaTek processors are indeed considered the best in the budget microprocessor (for mobile phones) segment. The latest processor from MediaTek is the Helio P90. It is said to support features such as intelligent imaging, better and quick photography, faster and more efficient gaming, and advanced connectivity with dual 4G SIM.

Intel, on the other hand, makes processors based in X86 architecture which supports all major mobile operating systems. Among the major processors produced by the company, Intel Atom processors are used in the X5 and X7 series. These have 64-bit architecture and four cores which can be clocked up to 2.4GHz. Intel Core M is one of the low-voltage processors to be used in mobile devices and notebooks.

In this segment, Intel and AMD are the market leaders. Intel chips are said to be the best for gaming and other predominantly single-threaded tasks. Particularly deserving a mention is the Core i5-9400F, which is both affordable and powerful. It comes with six cores, which is more than enough for most programs and a decent frequency of 4.1GHz when in turbo model. It is performs better than the Core i5-7600K from a couple of generations ago and is cheaper. Meanwhile, Core i3-8100 is the best budget offering from Intel. It’s a four-core chip with frequency of 3.6GHz that doesn’t offer additional boost speeds, but is fast enough for most PC users.

AMD’s best entry-level CPU is said to be the Ryzen 3 3200G. Its Zen+ CPU core is powerful enough for 1080p, entry-level gaming and the on board Vega graphics cores are said to be more efficient than Intel’s HD graphics. At 100 USD, it is also cost efficient.

Before we go into this, let us take a quick look at what is High-Performance Computing (HPC)? It basically refers to aggregating computing power in a manner that delivers much higher performance than one could get out of a typical desktop computer or workstation in order to solve large problems in science, engineering, or business. So it is definitely more complex than a simple desktop computer. These computers, or supercomputers as they are called, are computers with a higher level of performance compared to a general-purpose computer. Supercomputers play an important role in computational science, and are used for many computationally intensive tasks in areas such as quantum mechanics, weather forecasting, climate research, oil and gas exploration, molecular modeling (computing the structures and properties of chemical compounds, macromolecules, polymers and crystals), and physical simulations (simulations of the early moments of the universe, airplane and spacecraft aerodynamics, the detonation of nuclear weapons, and nuclear fusion). They have also played a major role in the field of cryptanalysis (analyzing information systems in order to study the hidden aspects of the systems).

In the June 2019 list of the TOP500 ranking of the world’s fastest supercomputers, China has the maximum number of systems on the list (219) with US taking five out of the first 10 spots. It appears that other company processors are not as popular as Intel although IBM Power CPUs can be found in seven systems on the list, followed by AMD processors, which are present in three systems. Intel chips have been used in 95.6 percent of the systems on the list.

For instance, at the fourth place on the list is the Tianhe-2A (Milky Way-2A) supercomputer, that has been developed by China’s National University of Defense Technology (NUDT). It has used a combination of Intel Xeon and Matrix-2000 processors. Frontera, another supercomputer, has achieved fifth rank by delivering 23.5 petaflops with its Dell C6420 system, that in turn runs on Intel Xeon Platinum 8280 processors. The Swiss supercomputer Piz Daint comes in at number six with a Cray XC50 system that is equipped with Intel Xeon CPUs and NVIDIA P100 GPUs.

Intel and AMD, on the other hand, are especially known for making microprocessors for gaming devices/ computers. When it comes to streaming and gaming, the Intel Core i9-9900K is a great option as it offers maximum speed of 5 GHz while AMD’s Ryzen 3900X provides maximum speed of 4.5 Ghz.