A look at the 10 most promising programming languages right now

Here are the 10 most in-demand coding languages today 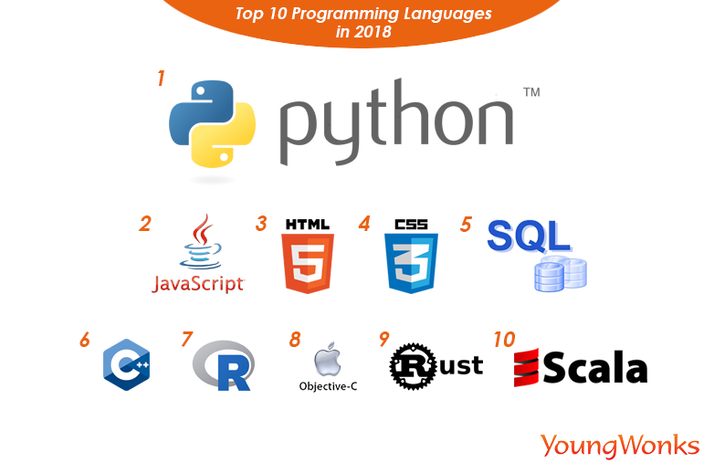 The most popular programming languages today are not surprisingly, the ones that are highly useful and relevant across platforms. And with programmers in great demand these days — it is estimated that by 2020, there will be a whopping 1.4 million computing jobs available — it is important to note that these are the coding languages that offer the greatest scope for growth. Knowing these powerful programming languages can open up a world of possibilities for you while ensuring brighter job prospects, higher pay and greater financial security. Even if you are not a coder, it can help you communicate better with the engineers on your team.

This begs the question: which are the best programming languages to learn in 2018? Here we tell you about the 10 most sought-after coding languages this year.

Python is one of the most useful computer programming languages today. It pervades the entire spectrum from web apps to data analysis. With its simple and straightforward syntax, it is easy to learn and its large standard library means that early on in the course, students can work on projects that yield reliable, functional results. A lot of its popularity can also be traced to its being a free and open source, in addition to Google’s investment in it over the past decades. Not surprisingly, it is said to be the most commonly taught programming language in US schools. Apps created with the Python framework include Google, YouTube, DropBox, Quora, Reddit, Pinterest and Instagram.

Vishal Raina, founder and senior instructor at YoungWonks, explains why their curriculum chooses to focus on Python over other programming languages. “At YoungWonks, we believe that learning one language well is more important than learning many. Heavily used in the popular areas of Big Data Analytics, Web Programming, Internet of Things (IoT), Machine Learning and Artificial Intelligence (AI), Python has been consistently ranked #1 in recent years on the list of top programming languages to learn,” he says.

JavaScript (JS) is a must-know programming language as it offers good job opportunities. It is a high-level, prototype-based programming language that is mainly used for building server-side applications, video games and mobile apps; some of the popular sites relying on JS include Google, Facebook, YouTube, Yahoo, Wikipedia, Amazon and Twitter. Its biggest USP is WORA (write once, run anywhere); in other words, JS is compatible with multiple software platforms, which in turn has made it many programmers’ favorite. Supported by most Internet browsers, including Google Chrome, Firefox and Microsoft Internet Explorer, the popularity of JS is tied to that of the Internet, and it is easy to learn. Additionally, the code in JS is executed on the user’s processor instead of the web server, which helps save bandwidth and reduce the latter’s load.

HTML (Hypertext Markup Language) is an influential programming language primarily because it is one of the three cornerstone technologies for the World Wide Web; JS and CSS (Cascading Style Sheets) being the other two. It is a standard markup language for creating web pages and web applications. Almost all web designing needs a basic understanding of how HTML works or how HTML codes are written. An HTML file contains ‘markup tags’ that tell the browser how to follow instructions within these tags. HTML can embed programs written in a scripting language such as JS. And while it comes with its own set of criticisms such as non-standard style sheets and difficult formatting, it is text-based, platform independent and its tools are easily available.

CSS is the best programming language aimed at describing the presentation of a document written in a markup language. This style sheet language allows for the separation of presentation (style) and content (structure), including features such as layout, colors, and fonts. Using CSS, the same markup page can be presented in different styles for different rendering methods such as on-screen, in print, by voice and on Braille-based tactile devices. The graphic design of a document (or more) can be carried out quickly and easily, just by editing a few lines in the CSS file they use, instead of changing markup in the documents. It is thus used by most websites to create visually appealing web pages and user interfaces for web and mobile applications. Impressive examples of sites built using CSS include that of Type Terms, an animated typographic cheat sheet and the website of MIT Technology Review, a reputed 119-year-old publication.

Structured Query Language (SQL) is a highly useful domain-specific language used in programming; it is designed to retrieve large amounts of records from a database quickly and efficiently. Almost every app has backend database and SQL helps you access the same. With SQL, one can view the data without storing the data into the object. Moreover, standard SQL makes it easier to store and access data in a relational database management systems without having to write a lot of code. Stack Overflow and SurveyMonkey are among websites that use this programming language. However, most SQL code is not fully portable among different database systems without adjustments. This is why SQL isn’t used alone.

C++ is a popular general-purpose programming language with imperative, object-oriented features. Offering high performance, efficiency and flexibility of use, it has been useful in software infrastructure and resource-constrained applications, including desktop applications, servers (for instance, e-commerce, web search or SQL servers), and performance-critical applications such as telephone switches or space probes. Its popularity derives from its portability, a rich function library and the fact that, unlike C, it allows exception handling and function overloading. Many vendors provide C++ compilers, including the Free Software Foundation, Microsoft, Intel and IBM.

R is a free (libre) programming language and software environment for statistical computing and graphics. Widely used among statisticians and data miners for data analysis and for developing statistical software, it is supported by the R Foundation for Statistical Computing. Apart from incorporating all standard statistical tests, models, and analyses, it is useful for managing and manipulating data. R’s graphical capabilities are impressive too, given that it offers a fully programmable graphics language that surpasses most other graphical packages. What makes it even better is that it is an open source software and has been reviewed by many internationally renowned statisticians and computational scientists. R runs on many platforms, including GNU/Linux, Macintosh, and Microsoft Windows.

Objective-C shot to popularity as the main programming language used by Apple for its OS X and iOS operating systems and their application programming interfaces Cocoa and Cocoa Touch, before it developed and switched to Swift. This object-oriented programming language is extension of standard ANSI C, so existing C programs can be adapted to use the software frameworks without losing any of the work that went into their original development. This means you avail of all the benefits of C when working within Objective-C. Moreover, the language syntax is small, unambiguous and easy-to-learn. Objective-C supports an open style of dynamic binding, a style that can accommodate a simple architecture for interactive user interfaces. For this reason, it is said to be more dynamic than other object-oriented languages based on C.

Scala - the portmanteau of scalable and language - aims at growing with the demands of its users and is thus counted among the in-demand programming languages today. It is a type-safe Java Virtual Machine (JVM) language that combines object oriented and functional programming into a concise, logical language. Designed to address the criticisms of Java, Scala may not be very easy to learn, but it is in fact a much cleaner and well organized language that makes it easier to use over time and ultimately increases productivity. Its Java compatibility makes it ideal for Android development, especially projects needing a functional approach. Companies such as LinkedIn, Twitter, FourSquare are known to use Scala.