What Do Ivy League Schools Look For In Their Students

All that the top US colleges seek in their students 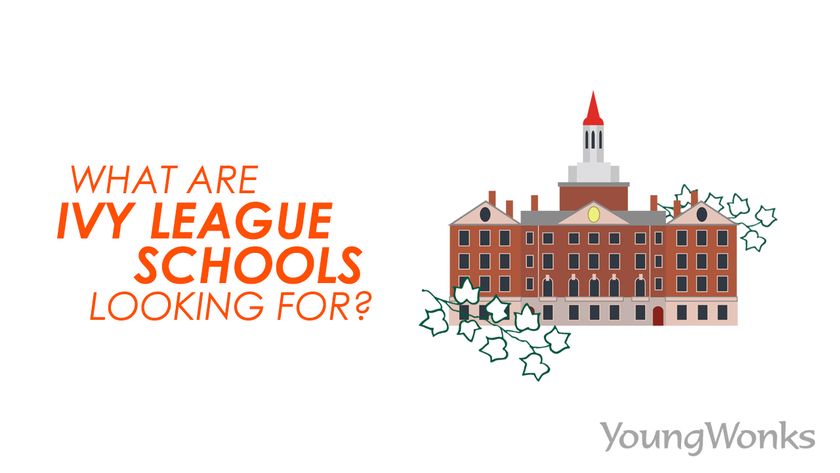 It is interesting to note that the term Ivy League became official only aƒfter the formation of the National Collegiate Athletic Association (NCAA) Division I athletic conference in 1954. Ivy League schools are generally ranked among the best universities worldwide by U.S. News & World Report. All eight universities find place in the top fourteen of the 2019 U.S. News & World Report national university rankings.

Today, these institutions have some of the largest university financial endowments in the world, which in turn lets them offer several resources to their students for their respective academic programs and research endeavors. It’s no wonder then that the term Ivy League has connotations of academic excellence; many of their students are Nobel Laureates.

These colleges are known for being selective in their admissions; since the year 2000, the acceptance rates at each of the universities is said to have varied from 6 to 16 percent. In fact, in the most recent academic year, seven of the eight Ivy League schools reported record-high applications; seven also reported record-low acceptance rates.

This brings us to the question: What qualities do these prestigious Ivy League institutions seek in their students?

Typically, applicants who have been admitted in Ivy League colleges boast excellent grades in academics (with a focus on certain subjects), in addition to having a track record of meaningful involvement in extracurricular activities, leadership skills, and well-crafted essays.

So how does one go about imbibing these qualities?

Ivy League universities (and most universities, for that matter) consider student accomplishments from the ninth to 12th grades. So typically, achievements in say the 7th or 8th grade don’t matter all that much. However, successful Ivy League applicants boast impressive school records right from the start. So a student could be part of an accelerated math program while in middle school or even learn a foreign language as early as possible and accomplish fluency in it. A strong background in calculus and mastering a foreign language will keep a student in good stead when it comes to Ivy League applications.

Given how we are living in a technology dominated world, learning coding and mastering one or more programming languages is also something that is sure to keep one in good stead.  Learning coding, after all, comes with a posse of advantages: it gives one the incredible ability to create new things, often out of their own homes! Indeed, there are few ways better than showing initiative to make something unique and useful when it comes to consolidating one's portfolio. Technology today allows us to leave an impact on people's lives and change them for the better; we see this in the open-source code shared on GitHub, which lets everyone avail of it and benefit from it. Such instances are no doubt as important as scoring well in academics. For kids who wish to make a mark and get a head start in doing so, joining an after-school coding program such as YoungWonks Coding Classes for Kids is a safe bet. With its 1:1 student-teacher ratio, individual attention is assured and this does give students an edge over others.

Similarly, a student could dabble in a few extracurricular activities during school in order to find his/ her true calling. It could be theater, music or sports.

Getting into an Ivy League school has a lot to do with being able to handle and succeed in one’s college coursework. One way to do this is to take challenging classes available to you. That said, bear in mind that one needs to be realistic about one’s capabilities. There is no point to taking up say 7-8 courses in your junior year. If anything, such a strategy will backfire and is most likely to lead to a burnout and thus, lower grades.

Also make sure you focus on core academic areas - be it English, math, science - and do well in these subjects. Especially if you have been to a high school with an International Baccalaureate (IB) curriculum, you should make the most of the increased academic opportunities in addition to doing well in your SAT/ACT and your letters of recommendation.

Is it enough to just take up challenging courses? The answer is no. The fact of the matter is that both challenging courses and good grades are equally important when it comes to seeking admission into an Ivy League college.  And given that Ivy League applicants face tough competition, the admissions offices may not necessarily give much attention to weighted GPAs. So while having straight As may not get you into the Ivy League, every B will work against you. Most successful Ivy League applicants have unweighted GPAs that are 3.7 range or higher.

Ivy League schools use standardized tests to compare students, especially since they attract applications from around the world. That being said, they are known to factor in the advantage that financially well off students enjoy with the SAT and ACT and thus are said to be more generous to students from financially disadvantaged backgrounds, especially if the latter exhibit strengths in other areas such as extracurricular activities, community service etc.

When it comes to showing engagement in extracurricular activities, it is imperative to demonstrate true passion for the activity and not just a passing interest in it. Always think of your extracurriculars in terms of the depth of your involvement/ participation and not breadth. This means that a student who plays tennis one year, acts in a play one spring, and then joins yearbook another year comes across like a Jack of all trades and thus, master of none. Establish and nurture a clear passion and expertise in whatever you choose to pursue.

6. Being A Team Player And Caring About The Community

7. Getting The Personal Statement Right

Make sure you pay attention to the personal statement you share as part of your application. Do your research and ensure that your essay has no errors. Avoid clichéd topics but don’t go out of your way and force yourself to write on something that is extraordinary. Instead highlight the extraordinary within the ordinary and convey your commitment in the statement/ essay. The topic should ideally be something important to you, and something that says that you have really thought this through or lived this and thus formed an informed opinion.

All Ivy League school applications need school-specific supplemental essays in addition to the main Common Application essay. Your aim should be to to convince the school through these essays - much more than the common essay, in fact - as to why you are interested in a specific Ivy League school. For instance, the admissions officers at Harvard are not just looking for academically successful students; they are looking for well-rounded students who are truly passionate about Harvard and have particular reasons for wanting to attend Harvard. So do enough research and take care to ensure that the supplemental essay you submit is not generic and is instead targeted towards one school.

As one of the stages in the application process, the interview can make a big difference to whether you will get through or not. Do your homework well, especially when it comes to answering queries about your major subjects, interests, scores, strengths, the challenges you faced, your inspiration, future goals and reasons for applying. Ivy League interviews are typically a friendly chat but it wouldn’t hurt to do enough preparation. Avoid interview mistakes such as lying/ exaggerating things, talking too little, reaching late, inadequate research, etc. Also make sure you are polite and personable during your interview.

10. Applying Via A Suitable Admission Program

On the other hand, under the Early Decision program, not only does one apply to just one college through an early admission program, but there’s also the catch here that if you get through, you’ll have to withdraw any other college applications. This means that you must apply under this program only when you are absolutely sure about wanting to attend a particular Ivy League school.

It is important to note here that while schools such as Brown, Columbia, Cornell, Dartmouth, and Penn have Early Decision programs, Harvard, Princeton, and Yale all have a Single-Choice Early Action program.

Another tip: if you think you are ready to take on the Ivy League admission process on all fronts (think grades, SAT/ACT scores, interviews, essays, extracurriculars), applying early is your best option as it can significantly improve your chances of getting admitted. According to the table of 2014 Ivy League data shared in an article on www.thoughtco.com, students are four times more likely to get into Harvard by applying early than applying with the regular applicant pool.

There are also external factors at play. For example, a student from a distant, underrepresented background or group could have an edge over one from a more “mainstream” group. Indeed, diversity along the lines of gender, geography, ethnicity, religion, and philosophy is now being encouraged.

Notwithstanding that, the bottom-line remains the same: an Ivy League college is typically on the lookout for a student who has consistently good grades (i.e someone who has developed good study habits, reads a lot so as to hone his/ her verbal, writing and critical thinking abilities), has learnt a foreign language, has shown unwavering commitment and excellence in an extracurricular activity, has taken up a challenging course - it could be an after-school math, science or coding program - and more importantly, has learnt to explore and enjoy learning about new things.