Python Programming for Kids and Youth 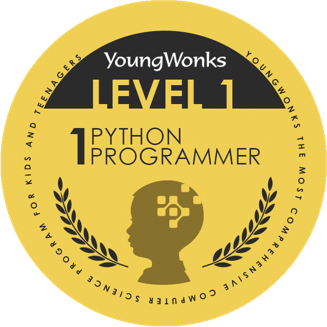 Python Programming (coding) is a computer programming course specifically designed for kids and teens to get comfortable with Python Functional Programming. This Python training class is a great way for children to get started with real syntactical computer programming. The use of online material which is accessible 24/7 on the YoungWonks Portal along with live teacher-lead weekly classes makes it the industry’s best python training course.

This program is offered as a Python Online training program where teacher and student connect once a week online for a one-to-one private lesson. In addition to the Python online course the program is also offered as an in-person class at the YoungWonks Coding School facility with a 4:1 student teacher ratio.

This YoungWonks program has the conceptual depth of a college level program while at the same time is designed in such a way that even kids and youth can understand the material.

Python is a general purpose, high-level programming language. It’s one of the most popular programming languages in the world today. Its use continues to be on the rise with each passing year. Python is used in almost every industry now as it is compatible with all kinds of applications. Some of the fields where Python is widely used are Big Data Analytics, Internet of Things (IOT), Full Stack Web Development, Computer Vision, Machine Learning and Artificial Intelligence.

Python is also one of the easiest programing languages to learn. Python syntax reads like English; moreover, it allows programmers to express concepts in fewer lines of code. It has a huge coding community for support and this, in turn, makes working on complex Python applications a lot easier. Python has also won favor from majority of the top computer science college programs; it is the first language they prefer to teach as part of their computer science curriculum.