What is Progressive Education?

What is progressive education, how did it come about and what are its key features, goals, benefits and challenges today? Read on to know…

In this blog, we take a look at progressive education, what it stands for, its brief history and key advantages and disadvantages associated with it 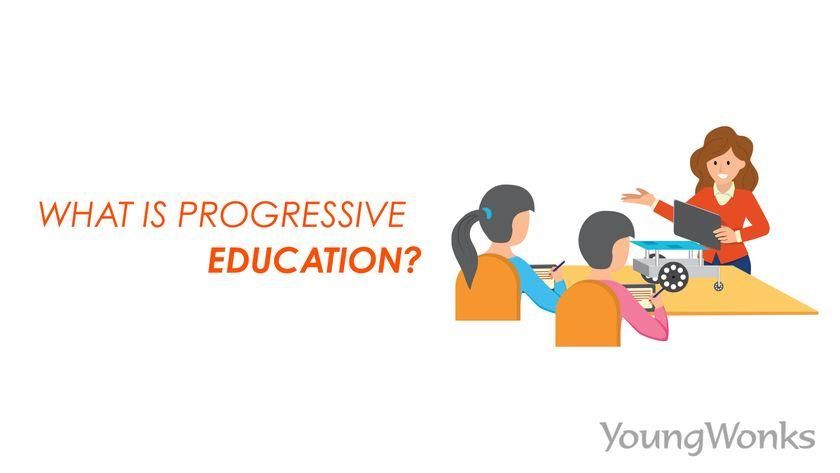 What is progressive education? You may have come across this term in schools and other educational institutions but chances are you wouldn’t know what it truly encapsulates. In this blog post, we shall take a closer look at this pedagogy term and the movement it represents. Our main reason for focusing on it here is simple: progressive education may have come about a while back, but it continues to be highly relevant today even as many institutions - especially private, independent ones - still swear by progressive philosophies.

What is Progressive Education?

Focusing on learning by doing

This includes working on hands-on projects thereby paving the way for experiential learning, aka learning by experience

This is a curriculum that covers a broad spectrum of themes

They are the cornerstones of progressive education; the whole idea is to have students take on problems and solve them thus helping them hone their critical thinking.

Encouraging students to team up and work in groups, giving them a sense of belonging and developing their social skills even as they engage with each other in collaborative and cooperative learning projects

Relying on understanding concepts instead of just rote learning

This is a key trait aimed at having students actually grasp the meaning of things being taught to them as opposed to their blind acceptance of information.

Promoting education with a bigger goal in mind

Teaching students about social responsibility and democracy and their power to change things. Imbibing in them the importance of community service through service learning projects.

Encouraging students to think out of the box by going beyond the scope of the curriculum prescribed in books and culling lessons from life experiences.

Planting the seeds of the growth mindset

Teaching students to have an open mind, thus preparing them for lifelong learnings.

Looking beyond the students’ theoretical knowledge and focusing on the application as evidenced in their projects and productions.

Helping students pick out subjects and making them see how knowledge about these subjects can be put to use in society.

The main goal of progressive education is to get students to have a hands-on learning experience, aka learn by doing. Also known as experiential learning, this method sees active participation by students in hands-on projects. It goes beyond theory and requires them to actually applying their lessons to real-life situations thus helping them fully understand the subject/ lesson at hand. Additionally, students also get acquainted with what all they need to actually solve the situation. This prepares them for the road ahead: for a real-life workplace that is typically a collaborative space dependent on creativity,  critical thinking and using it as part of a team (and independently too). Thus, progressive education or progressive learning gets students to reflect on their experiences, come up with their own questions, and attempt to answer them in collaboration with peers and teachers.

Many educational theories abound but progressive education can be traced back to the works of English philosopher and physician John Locke and philosopher-writer Jean-Jacques Rousseau; for instance, it was Locke who said that, “Truth and knowledge arise out of observation and experience rather than manipulation of accepted or given ideas.”  Rousseau too observed that mere subordination of students to teachers and memorization did not count as an education.

However, it is American philosopher, psychologist and educational reformer John Dewey - who is credited with taking the work forward as he worked at the University of Chicago. A prominent figure in the Progressive Education Movement that began in the 1880s and lasted for sixty years right into the 20th century, Dewey’s ideas and subsequent work actually paved the way for concrete school reform.

In the 21st century, the scope of progressive learning has certainly expanded to include skills, abilities, skills and learning dispositions of a higher order as mandated by the rapidly changing digital society. In fact, several of these skills are now closely linked to deeper learning, which in turn dwells on honing one’s skills in areas like analytic reasoning, complex problem solving and teamwork, which vary from traditional academic skills that tend to be mainly content knowledge-driven.

Particularly with regards to American education, it’s the rise of private schools/ institutions and the charter school movement that can be credited with boosting progressivism. Moreover, the passing of the No Child Left Behind Act in the US Congress back in 2001 too has shifted the spotlight again to progressive education systems.

And while indeed there are various iterations of progressive programs available across the US, most of the leading progressive schools today are found to have many factors in common. For instance, the curriculum; it is typically more flexible and is often shaped by the preferences of students. In such schools, teachers facilitate the learning experience even as they encourage students to explore newer avenues through a posse of learning activities. The study material too culls from a wider array of materials that make room for both individual and group research. Teachers here also foster among their students a sense of curiosity, having them try new things leading to interesting discoveries. Also, the use of community resources and service-learning projects is encouraged.

When progressive education first came about, it was met with some opposition; John Dewey observed that many institutions were only keen on producing a generation of obedient workers contributing to the economy (even today, this notion is popular in some quarters). But those believing in progressive education truly believe in its power to benefit students in the long run.

Indeed, traditional education may come with its share of perks; but that has not stopped many eminent educators, scholars, administrators, and theorists to talk about its drawbacks, especially as compared to progressive education.

For starters, progressive education has teachers identify and foster the creative energies and passions of individual students. Teaching here is not merely about passing on information and having students commit to their memory in order to ace their tests. Instead, students get hands-on learning thanks to projects, experiments and collaboration with peers. This helps students figure out topics they are passionate about and pursue them.

Such a setting, those advocating progressive education argue, is more likely to help students fall in love with their study material. Students also get to use critical thinking skills outside the classroom even as they assess and reevaluate their perspectives on real-world subjects as part of their projects.

The biggest challenge for progressive education lies in its implementation, especially on a large scale. When compared to progressive education, traditional education has many more takers. It also helps that the latter has been around for a much longer time, which means that instructors are usually better acquainted with it. Not surprisingly, more teachers find it easier to stick to the coursework and teach the curriculum in an already established pedagogical setting.

It’s also important to acknowledge that with more school systems sticking to the traditional framework, students find it easier to transition from elementary school to middle school, high school, and college; the consistent methods of teaching certainly make it easier for the administrators too. Plus, traditional education comes with a rigid structure that boasts a strong sense of organization and order as opposed to the progressive approach that is a lot more fluid in nature. Of course, this can also be a strong disadvantage as this only makes traditional teaching discourage (and often even eliminate) individuality.