What is Ubiquitous Computing?

What is ubiquitous computing, what are its varied applications, advantages and disadvantages? Read on to know…

In this blog, we take a close look at ubiquitous computing, also known as ambient computing or pervasive computing 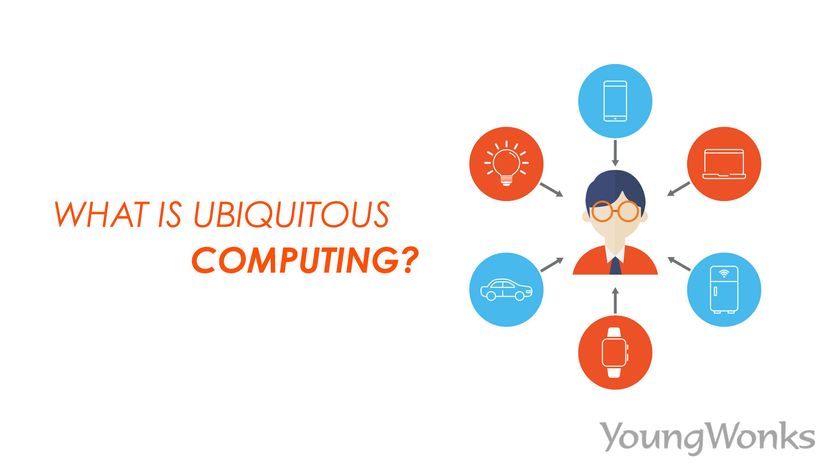 What is ubiquitous computing aka ubicomp? You may have heard this term in the context of cloud computing but if you do not know more, this blog here will fill you in. If you want to know more about cloud computing, read our blog here: https://www.youngwonks.com/blog/What-is-Cloud-Computing---An-Introduction-for-Absolute-Beginners.

What is Ubiquitous Computing?

What does ubiquitous computing mean? A term associated with the Internet of Things (IoT) (read our blog on IoT here: https://www.youngwonks.com/blog/What-is-the-Internet-of-Things),  Ubiquitous Computing is also known as ambient computing or pervasive computing, everyware and ambient intelligence. It aims to fully tap into the potential for connected devices and their benefits to become widespread such that they are available everywhere, i.e ubiquitous. The idea is to saturate the work, living, and transportation spaces with devices that can seamlessly communicate with each other thus making our lives more enjoyable and convenient.

It is, effectively speaking, a paradigm that involves connecting electronic devices, including embedding microprocessors to communicate information. Devices that use ubiquitous computing are constantly available and are fully connected. Thus the main focus of ubiquitous computing is producing smart products that are connected, making communication and the exchange of data easier and less obtrusive. For instance, smartphones, smart speakers, smart watches and smart home gadgets are typically the devices that form a core part of the ubiquitous computing network. Basically, a user communicates with the computing device - this could be a laptop computer, tablet, a mobile device, or a terminal in everyday objects such as thermostat or even a pair of glasses.

In addition to the ones shared above, there are many other devices used in these networks. Take for example, sensors. They are classic nodes in a ubiquitous system, since they are often activated by movement rather than when a conscious, user-directed input is detected.

The origins of ubiquitous computing can be traced to the late 1980s. Around the year 1988, Mark Weiser, who was employed as the Chief Technologist of the Xerox PARC (Palo Alto Research Center), coined the term ubiquitous computing. He wrote some of the earliest papers on the subject, including some with the PARC Director and Chief Scientist John Seely Brown. Weiser is credited with defining ubiquitous computing and delving into its major issues.

Let us look at some of the key features of ubiquitous computing.

Ubiquitous computing can be looked at as consisting of several layers, each with its own roles and together they form a single system.

Layer 1: This is the Task Management layer; it looks at user tasks, context and index. It also manages the complex dependencies that come with the territory.

Layer 2: This is the Environment Management layer that keeps up with resources and their capabilities in addition to mapping service needs and user level states of specific capabilities.

Layer 3: This refers to the Environment layer that tracks relevant resources and manages their reliability.

They are the most obvious and immediate example, since more often than not, one can just download an app and through it control their home automation systems and other ubiquitous applications.

Be it Apple watch or Fitbit, both come under ubiquitous computing.

Also good examples of ubiquitous computing experience. In fact, an autonomous vehicle that can identify its authorized passenger through smartphone proximity, dock and charge itself when needed, and handle toll, emergency response, and fast-food payments itself by communicating with infrastructure would make for an even better instance of ubiquitous computing.

Today, there is no dearth of smart home gadgets available and the number is only expected to go up even as home automation catches on in a bigger way: right from smart bulbs to smart locks for doors, windows and cabinets. Apart from lighting, features such as temperature, entertainment and appliances too can be controlled as part of home automation systems.

Advantages and Disadvantages of Ubiquitous Computing

Some of the benefits of ubiquitous computing include a reduction in cost of services utilizing smart networks, improved scheduling and productivity in manufacturing, and quicker response times in health care settings. Other benefits include more accurate targeted advertising and more convenient personal financial transactions.

Ubiquitous computing offers benefits to people by combining sensors, networking technology and data analytics to monitor and report on many different things, from purchasing preferences to manufacturing processes to traffic patterns. These computing systems are able to detect anomalies, errors and emissions in a work environment, enabling early intervention or preventing a workplace disaster. Ubiquitous computing can also track resource usage, inputs and outputs, allowing for better management of resources during high load periods or for better distribution of resources across a time period.

The deployment of ubiquitous computing sensors and networks to rural areas can also help with the delivery of services to remote places. Medical services can be offered well beyond the location of a hospital or a clinic, with doctors being able to monitor patient vital signs from great distances. Education to rural areas can also be offered through the use of interactive media delivery technology, letting students and professors communicate in a personal context without needing to be in the same classroom.

It is also important to note that despite the advances made in ubiquitous computing, the field continues to see issues in areas such as human-machine interfaces and data protection in addition to technical obstacles creating problems on both availability and reliability fronts.

Making ubiquitous computing accessible to everyone with a comprehensive infrastructure and ease of use is a daunting task, despite the rapid rise of smart devices today. Senior citizens and people in rural areas are still at a disadvantage and this is something that needs to be addressed for ubiquitous computing to be adopted in a wholesome manner.