What is the Internet of Things?

What is the IoT, what all does it include, what are the advantages it offers and the risks that come with it? We tell you in this blog post

The evolution of several technologies has led to the emergence of the Internet of Things (IoT) as we know it today. However, in addition to enjoying its benefits, one must also look at the threats associated with it... 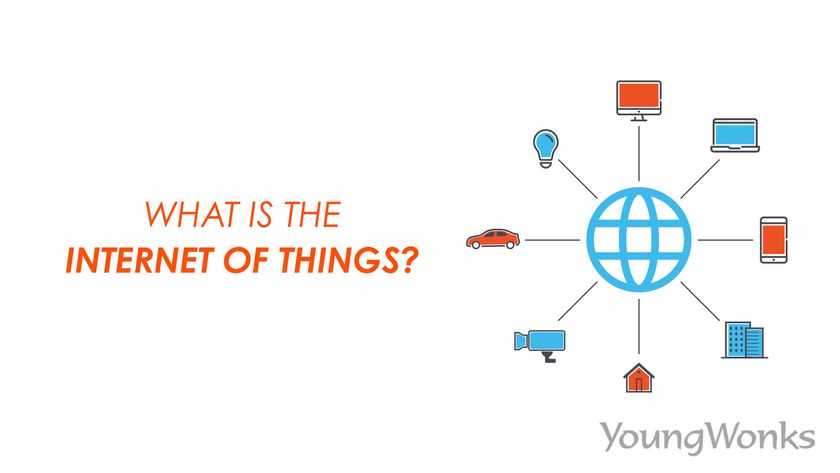 What is IoT? The term IoT is an often used term today but not many may know what it exactly stands for. In this blog post, we take a close look at the world of IoT, all that it covers, its many advantages and disadvantages.

What is the Internet of Things (IoT)?

The Internet of Things, aka IoT, refers to a network of physical objects or things (aka connected devices) that are embedded with sensors, software, and other technologies in order to allow them to connect and exchange data with other devices and systems over the Internet. So the world of IoT covers a wide range of smart objects, these devices could be ordinary household things or sophisticated industrial tools. This is a field that is rapidly growing today and the network already encompasses billions of smart devices.

Indeed, the simultaneous rise of technologies such as ubiquitous computing (where the user interacts with computers in many different forms, including laptop computers, tablets and terminals in everyday objects such as a refrigerator or a pair of glasses), commodity sensors, increasingly powerful embedded systems, and Machine Learning (ML) plus Artificial Intelligence (AI) has been a boon for the development of IoT. The field thrives today thanks to embedded systems, wireless sensor networks, control systems and automation (including home and building automation).

In the consumer world, IoT technology is typically synonymous with products that make up the smart home; these include devices and appliances like lighting fixtures, thermostats, home security systems and cameras, and other home appliances that support one or more common ecosystems, and can be controlled through devices associated with that ecosystem, say for instance smartphones and smart speakers. The IoT is also of use in modern healthcare systems today.

That said, there are some concerns regarding the growth of IoT technologies and products, especially in terms of privacy and security violations, and as a result, the industry and several governments are now looking to address them through a host of international and local standards, guidelines, and regulatory frameworks.

Examples of the IoT

Technically, any physical object can be turned into an IoT device as long as it can connect and exchange information with other objects through the Internet. So for instance, a lightbulb that can be switched on and off with an app on a  smartphone is an IoT device, just as the motion sensor or the smart thermostat in one’s home or office. There are no size limitations either; it could be a child’s toy or a driverless truck, with the larger objects likely to be filled with smaller IoT components. For example, a jet engine is made up of thousands of IoT sensors that collect data and transmit it back to make sure it is operating efficiently. It doesn’t stop at that either. In fact, entire smart cities are coming up now where entire regions are filled with sensors.

The term IoT is mainly used to refer to devices that communicate with the network independently of human action and they are usually not expected to have an Internet connection. This is why a PC (personal computer) isn’t typically considered an IoT device and nor is a smartphone -- even though the latter comes with a lot of built-in sensors. A smartwatch or a fitness band or other wearable device is, however, counted as an IoT device.

There was talk about adding sensors and intelligence to basic objects right from the 1980s and 1990s. One of the first developments was the modified Coca-Cola vending machine from 1982 at Carnegie Mellon University, which was the first ARPANET-connected appliance and it could report its inventory and if the newly loaded drinks were cold or not. Computer scientist Mark Weiser’s 1991 paper on ubiquitous computing, titled The Computer of the 21st Century, and academic venues like UbiComp and PerCom came up with the contemporary vision for the IoT.

Despite this, IoT development was slow; chips were too big and bulky and objects just couldn’t communicate effectively, nor was it cost-effective to connect up billions of devices. The use of RFID (Radio frequency identification) tags -- low-power chips that can communicate wirelessly -- was a big step then, as was the increasing availability of broadband Internet and cellular and wireless networking. Indeed, RFID tags being added to expensive pieces of equipment helped track their location and this was one of the first IoT applications. The rise of Internet Protocol version 6 (IPv6) - the most recent version of the Internet Protocol -- also helped the IoT world to scale up. The term / phrase Internet of Things was coined by technology expert Kevin Ashton (who even pioneered the use of RFID) in the year 1999, but it took another decade before the technology actually took off in a big way.

It was during this decade that the cost of adding sensors and an internet connection to objects continued to fall, and experts state that this is now a basic functionality that is likely to cost as little as 10 cents in the future, thus making it possible to connect nearly everything to the internet.

What are the leading applications of IoT?

IoT solutions power smart homes today and this is a very practical application of IoT as smart homes offer cutting edge convenience and home security. A good smart home is one that combines intelligent utility systems and entertainment. For example, such a home could have an electricity meter with an IoT device giving one information about the everyday water usage, a set-top box allowing the functionality to record shows using a remote, automatic illumination systems, advanced locking systems and connected surveillance systems.

Another popular application of IoT platforms today is that of self-driving cars. These cars rely on many sensors and embedded systems connected to the cloud and the Internet so as to keep producing data and sending it to the cloud for informed decision-making using Machine Learning. Google and Tesla are already making inroads in the field, while Uber tried it before shelving the self-driven car project.

A good use case of this would be Amazon Go,  the e-commerce giant’s latest concept store. Amazon Go is essentially a retail store where consumers pick up items from the shelves thereby adding them to their cart in real-time; they then go cashless since the money is deducted from their Amazon wallets. Each time one changes one’s mind and picks up another item, the old one gets deleted and the new item gets added instead. There is no cashier here either, since products are already billed online. So consumers needn’t stand in line and they can just step out after picking up products from shelves and getting the corresponding amount deducted from their online wallets.

Wearables are basically technological contraptions that can be worn by the end consumer. So wearable technology - also known as wearables, fashion technology, tech togs, or fashion electronics - are basically smart electronic devices that can be integrated into a piece of clothing or an accessory. Fitted with micro-controllers, these electronic devices can be worn on the body as implants or accessories. Smartwatches, activity trackers and sports watches are popular examples of wearable technology. Wearable technology continues to do well today as these devices are used in different areas from healthcare and wellness to fitness.

Another useful IoT example would be that of a smart grid. A smart grid is a holistic solution that uses an array of Information Technology resources in order to enable existing and new gridlines to reduce electricity waste and cost. Such a grid is more efficient, reliable, and economical.

Using IoT can change the face of farming as we know it. Even as drones are being used for farm surveillance and cutting edge tools are being developed for processes such as drip irrigation, water distribution and understanding crop patterns, IoT will help farmers get greater yields and more efficiently.

Interconnected sensors, instruments, and other devices linked with computers’ industrial applications such as manufacturing, energy management, etc come under the Industrial Internet of Things. Industrial Internet of Things (IIoT) may not be as popular as the IoT wearables but market research by reputed companies such as Gartner and Cisco shows that the former does have a lot of potential.

IoT can be used for efficient supply chain management; an example would be tracking solutions for goods that are on the road.

Telehealth or telemedicine may not be thriving as yet but it does hold future potential. Digital communication of medical imaging, remote medical diagnosis plus evaluations and video consultations with specialists are some examples of the IoT being used in telehealth.

Smart cities are our future, where not just people but even our devices would be connected to each other over the Internet, giving us a new level of urban convenience like never before. Indeed, technology is being incorporated into infrastructural requirements across key areas such as waste management, traffic management, water distribution, electricity distribution and more.

In this section, we look at the key advantages of using the IoT.

Here we look at the main vulnerabilities of IoT.

The bottomline is that IoT needs a lot of planning in place before one can enjoy its dividends.