What is a Multimeter and How Does It Work

In electronics, the multimeter has come to be a basic necessity, especially since it can be used to measure several parameters. This blog tells you how to use this instrument to measure voltage, current and resistance 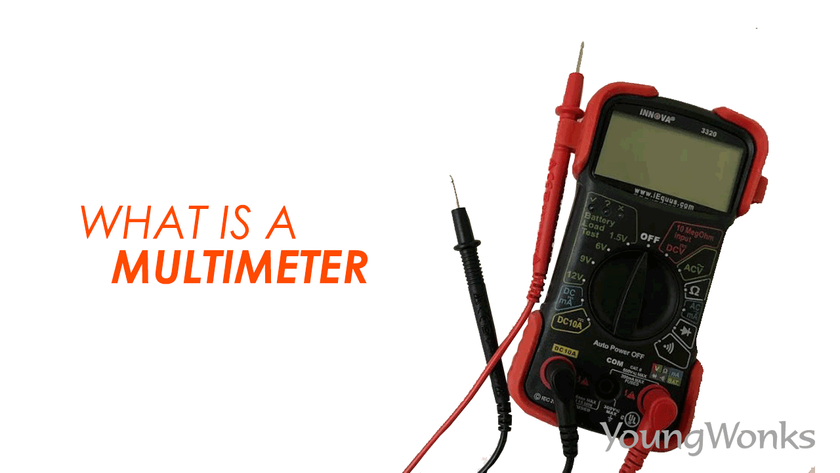 In this blog, we shall look at what is a multimeter and what are its functions?

What is a multimeter?

A multimeter or a multitester, also also called a VOM (volt-ohm-milliammeter), is an electronic measuring instrument that performs several measurement functions in one unit. A typical multimeter can be used to measure voltage, current and resistance and even to check for conductivity.

A multimeter can be a hand-held device useful for basic fault finding and field service work, or a bench instrument which can calculate to a high degree of accuracy. Multimeters come with an array of features and at different price points. Some cost less than $10, while laboratory-grade models with certified calibration can cost upwards of US$5,000.

Using a multimeter to measure the voltage

Before we look at how a multimeter is used to measure the voltage, let’s look at the term voltage itself. Now voltage is basically the difference in electric potential between two points. This difference in electric potential between two points (i.e., voltage) in a static electric field is defined as the work needed per unit of charge to move a test charge between the two points. In the International System of Units, the derived unit for voltage is named volt and voltage is symbolically denoted by V.

Now if we wish to measure the voltage across the terminals of the AA batteries, here’s how you can do it. As shown in the image below, connect the black probe into COM and the red probe into mAVΩ. Set the multimeter to 2V in the DC (direct current) range. This is because most portable electronics use Direct Current (DC) and not Alternating Current (AC). Connect the black probe to the battery's ground or ‘-’ and the red probe to power or ‘+’. Now press the probes against the positive and negative terminals of the AA battery. If you’ve got a new battery, you will see around 1.5V on the display. As you can see in the image, the voltage for the batteries is being shown as 4.5V. 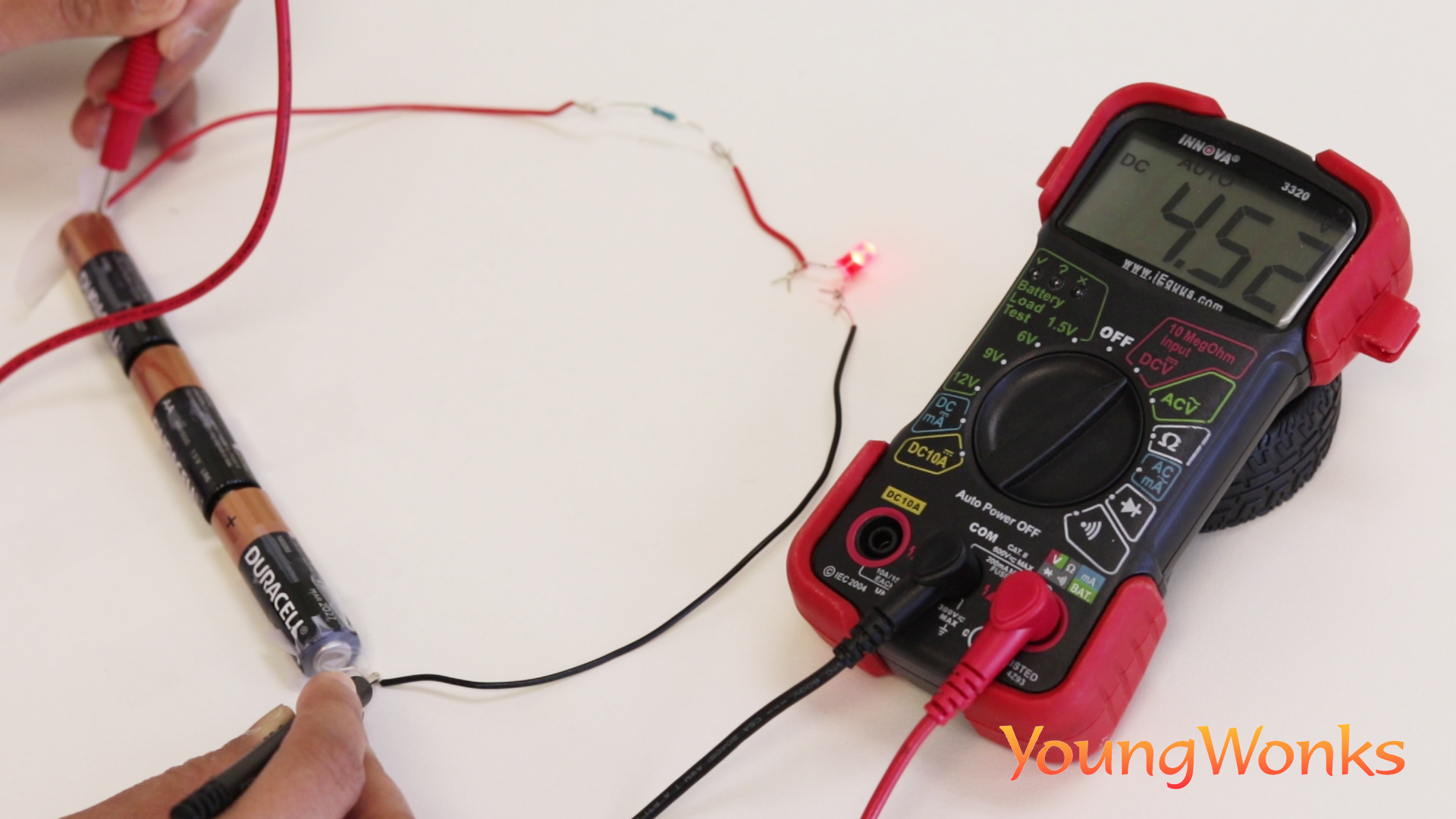 If you’re measuring DC voltage (such as a battery or a sensor hooked up to an Arduino) you want to set the dial/ knob where the V has a straight line. AC voltage (the current flowing out of wall sockets) can be dangerous, so we rarely need to use the AC voltage setting (the V with a wavy line next to it). If you’re looking to measure AC, we recommend using a non-contact tester rather than a multimeter.

Similarly, if you wish to check the voltage across the resistor, you can do as shown in the image below; it is shown to be 2.55V. 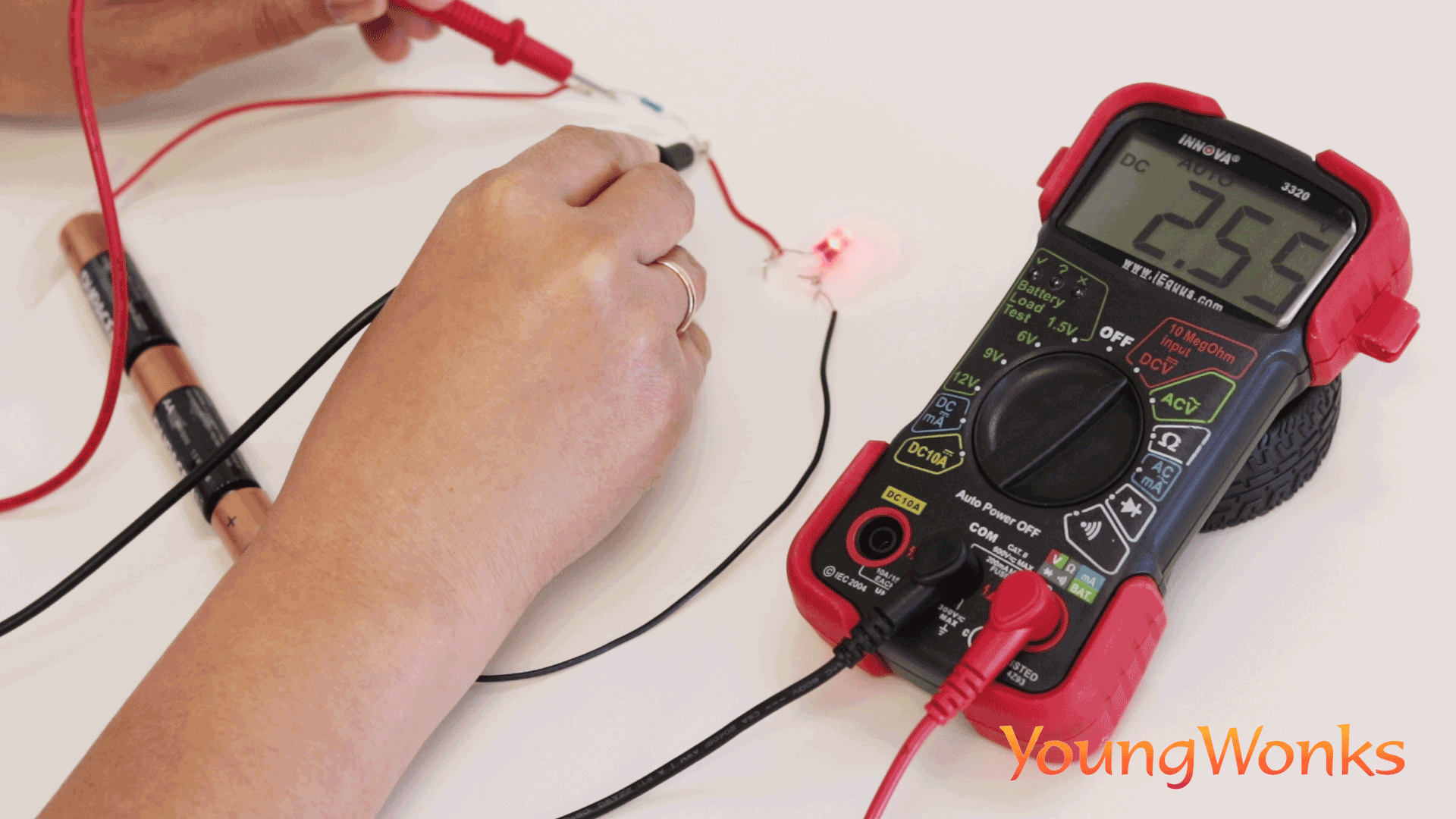 Using a multimeter to measure the current

Now reading current is tricky because you have to measure current in a series circuit. So while voltage is measured with the voltage common collector and ground in parallel circuits, to measure current you have to physically interrupt the flow of current and put the meter in-line. So you first turn the multimeter's dial/ knob to the Current mode, followed by pulling out the red wire going to the resistor, and connecting the black probe from the multimeter to it. You then connect the multimeter’s red probe to the positive terminal of the power source, so you can measure the current flowing through the circuit. As you can see in the image below, the current is being calculated as 0.01 milliampere. 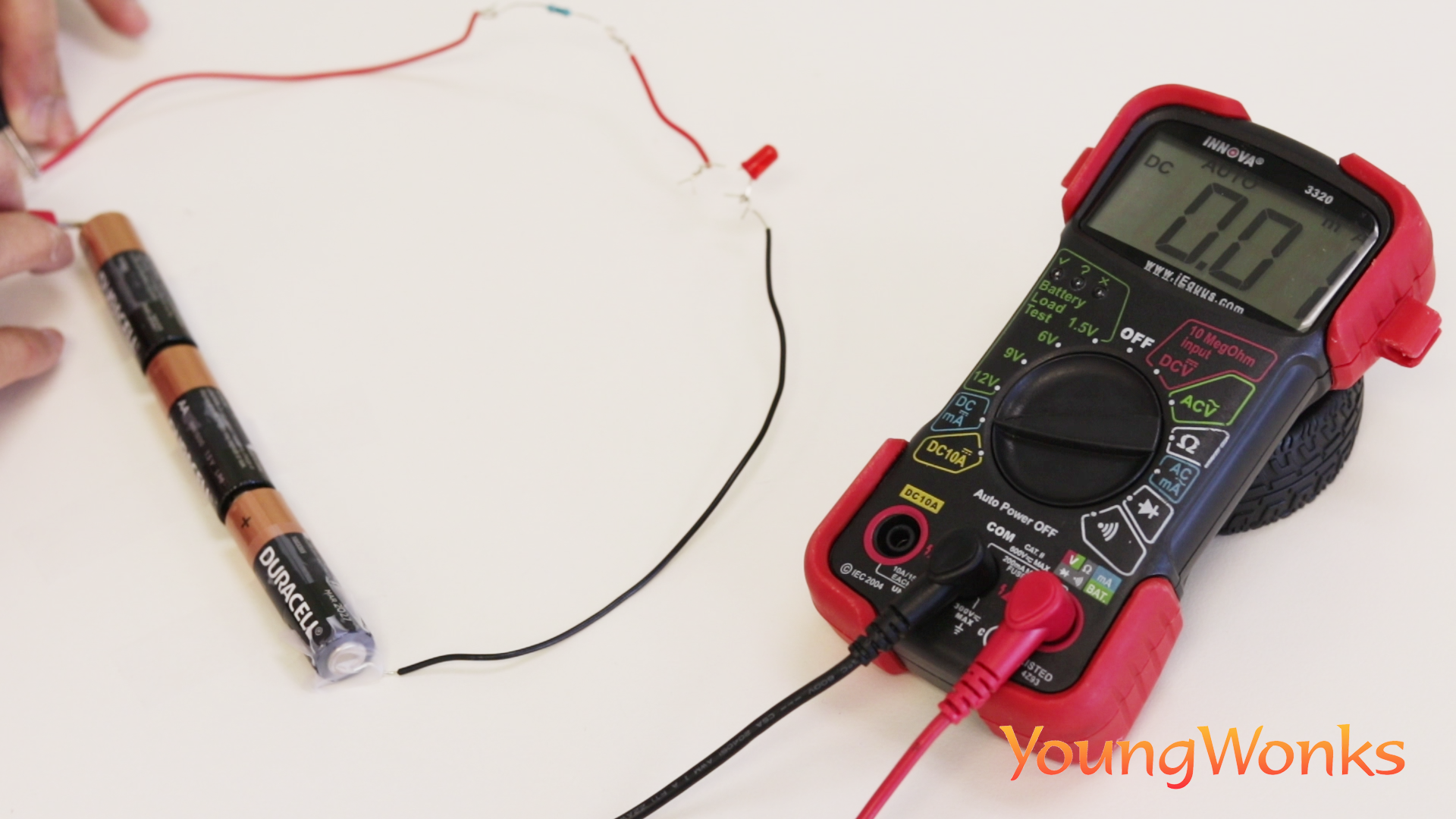 Using a multimeter to measure the resistance

So what is resistance? The electrical resistance of an object is a measure of its opposition to the flow of electric current.  Resistance is denoted by the symbol R and its SI unit is the ohm (Ω). 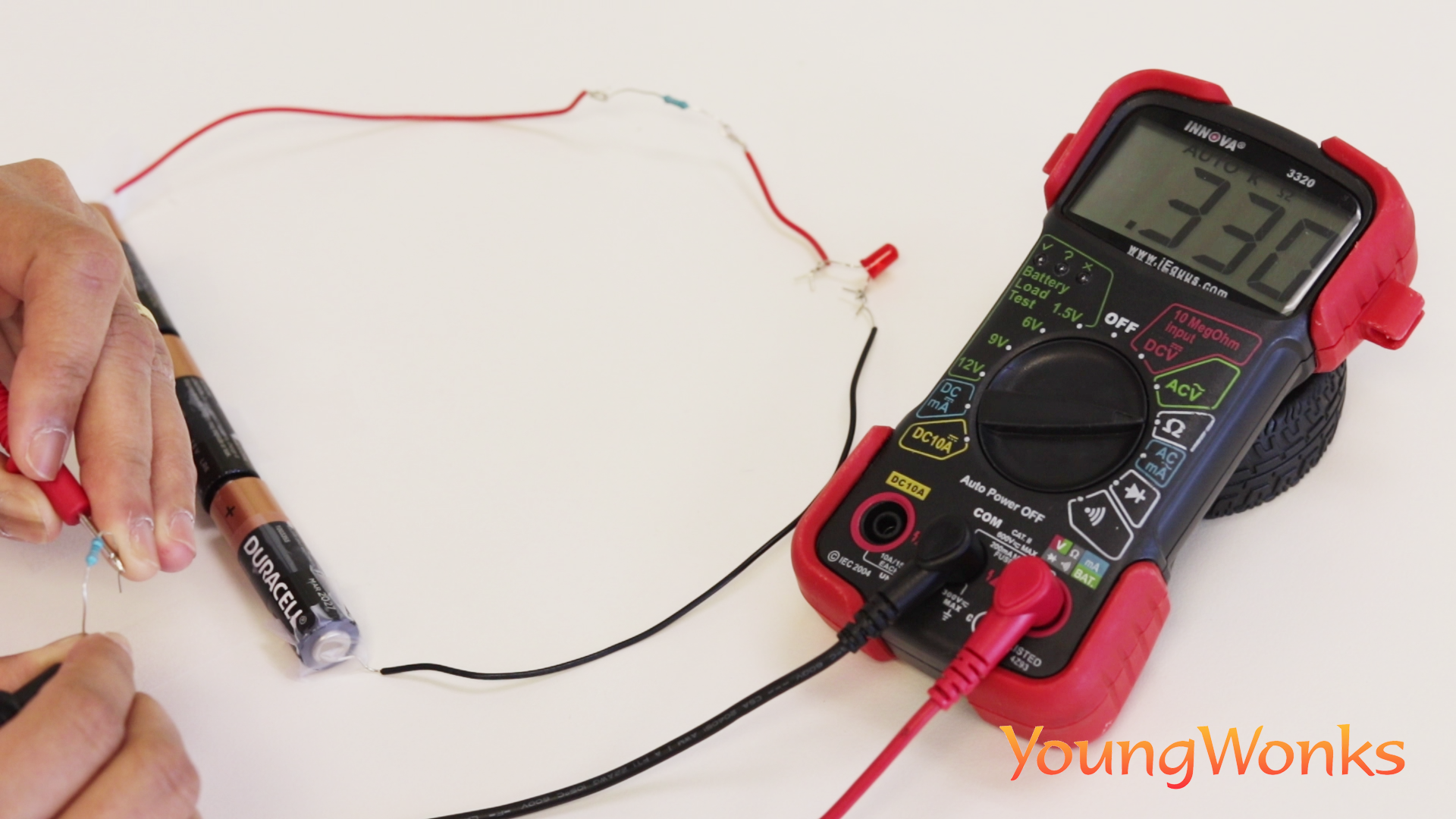 Using a multimeter to check the conductivity 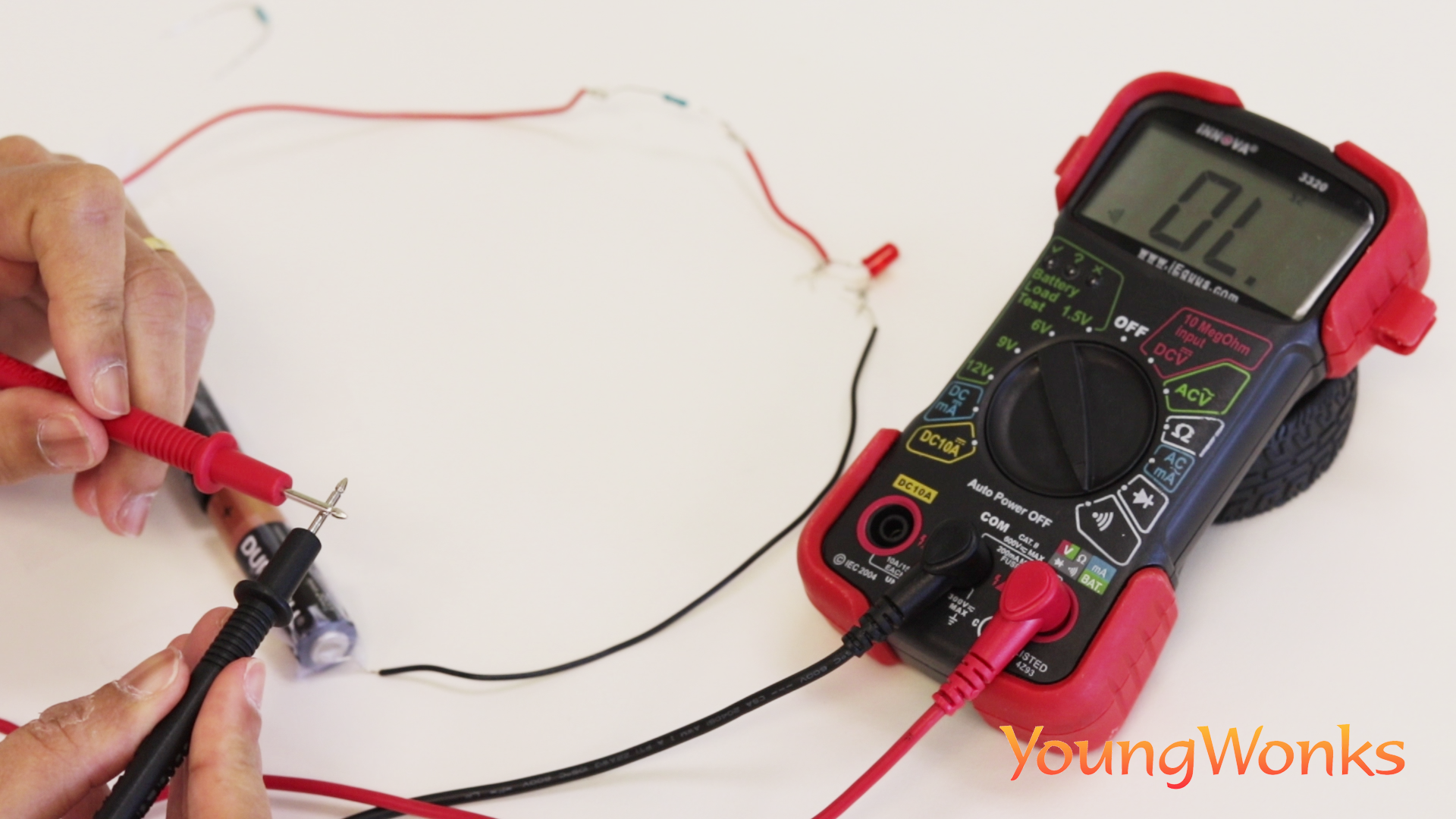 Similarly, you can check the conductivity between any two points; say two points in a regular wire - the beginning and end of the wire as shown below. 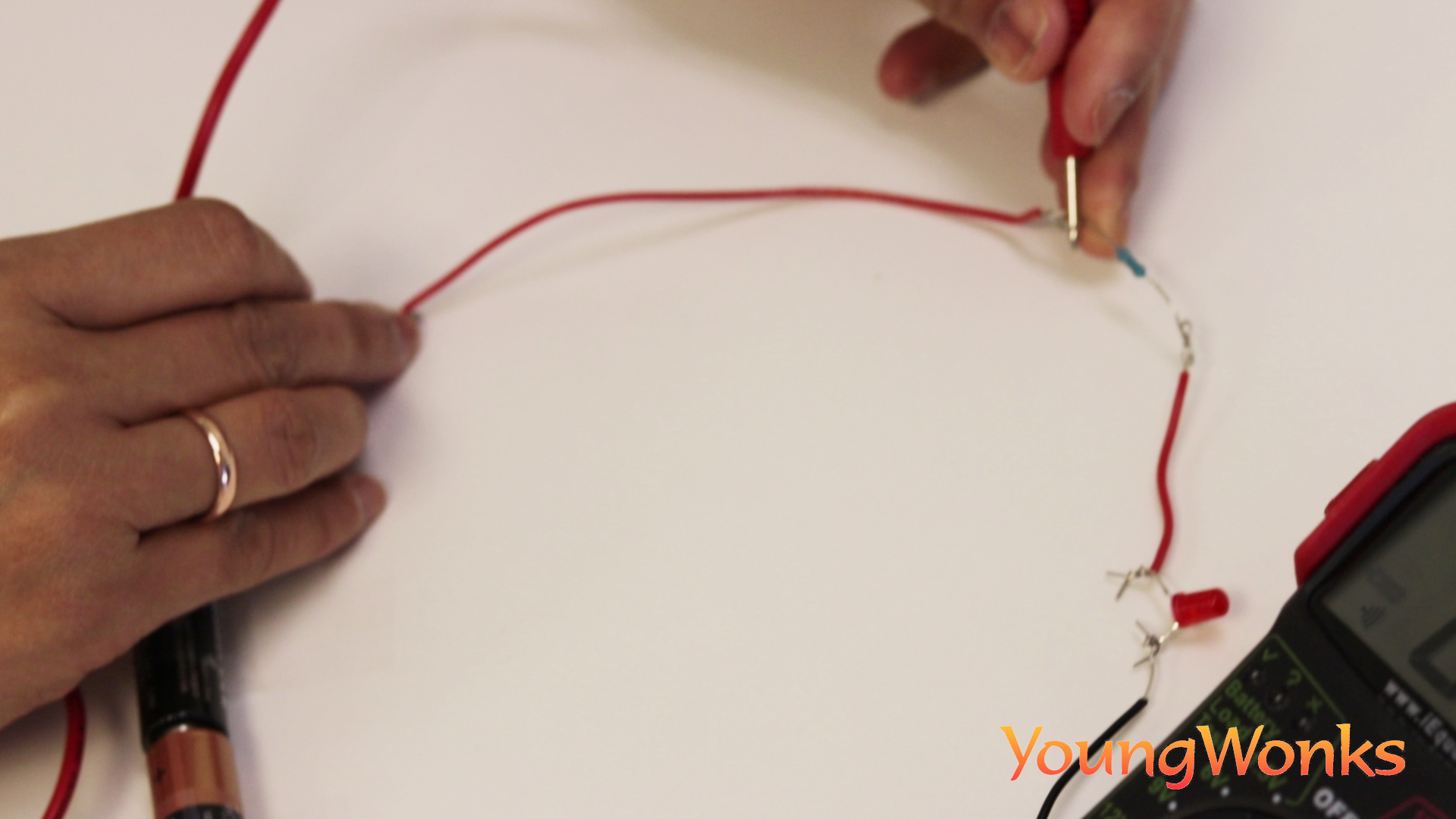 You can also check for conductivity between two points of a medal (typically made out of a metal; as shown here). 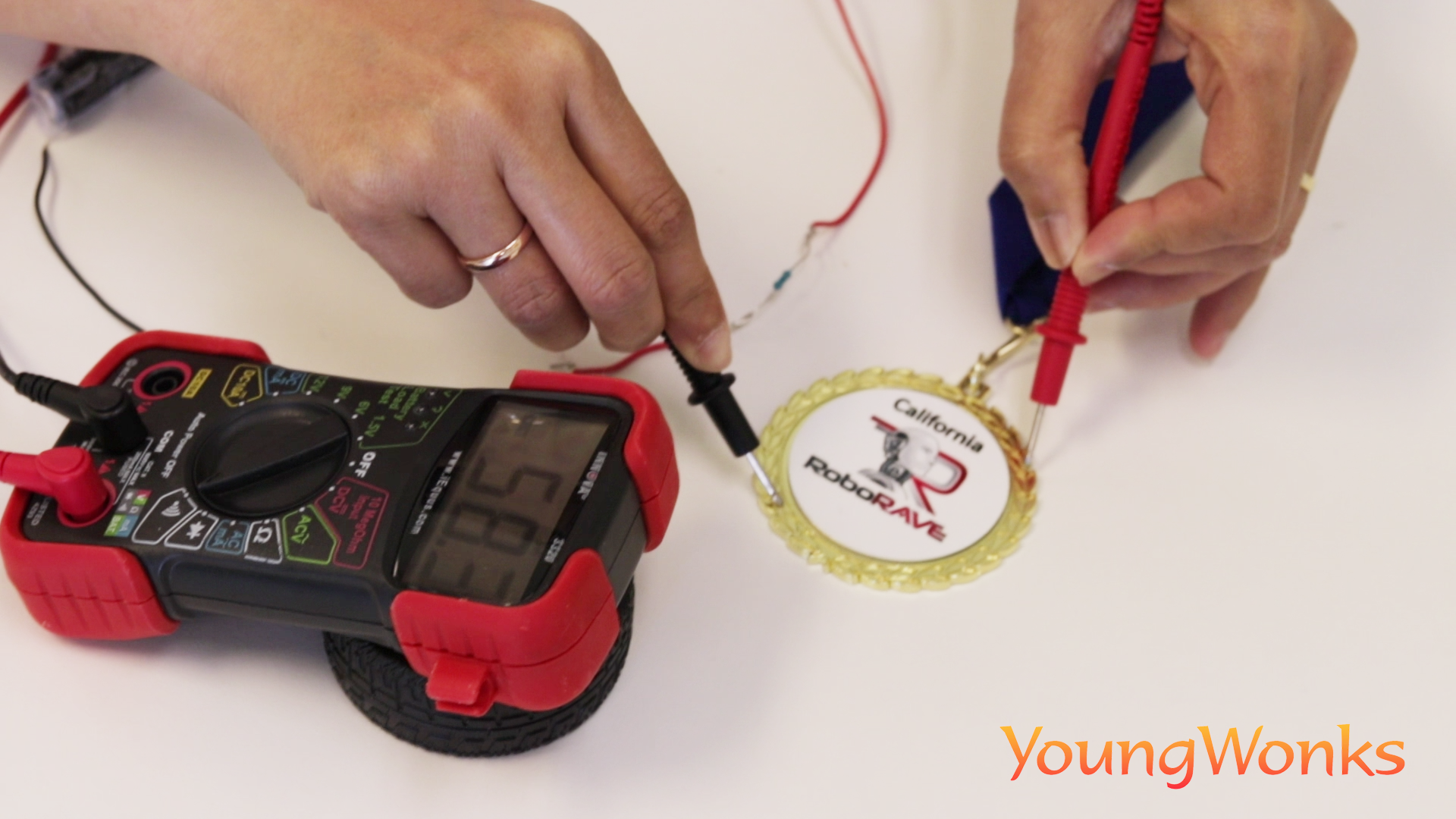 In both the above cases, you’ll hear the tone indicating high conductivity.

But when you connect the probes to two ends of a wooden piece as shown below, you’ll find no tone being emitted. This means that the wooden piece is not conductive. 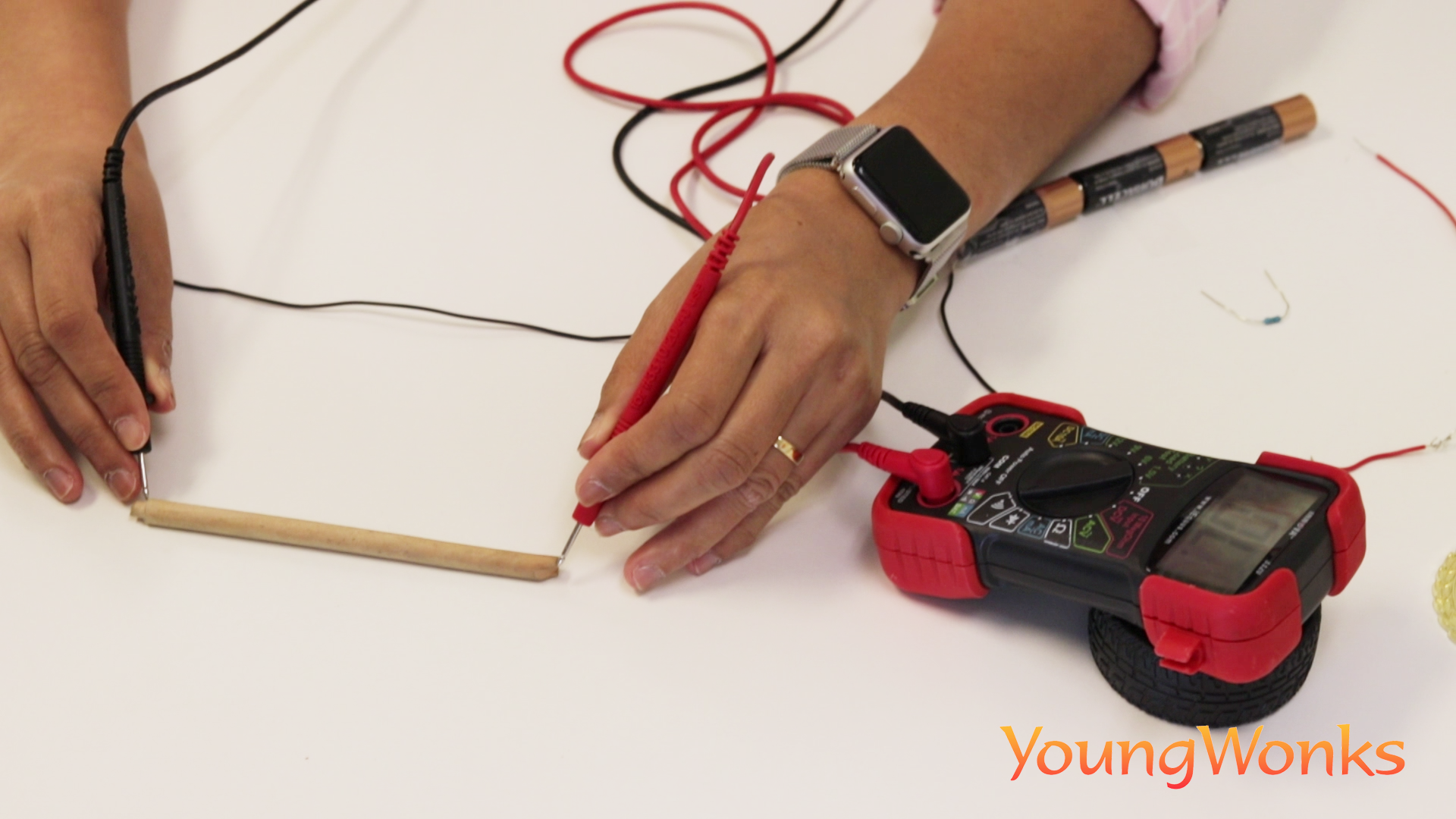 Bear in mind that all multimeters take readings over some time and then give you the average, so you can expect the reading to fluctuate. In general, cheaper meters tend to average more harshly and respond more slowly, so keep that in mind when you note the readings.

Below is a video on the subject: