Meet YoungWonks' student Kairan Quazi, who is among the youngest featured speakers at the Embedded Linux Conference happening this week

At 10 years of age, Kairan Quazi’s list of achievements is longer than that of most grownups… 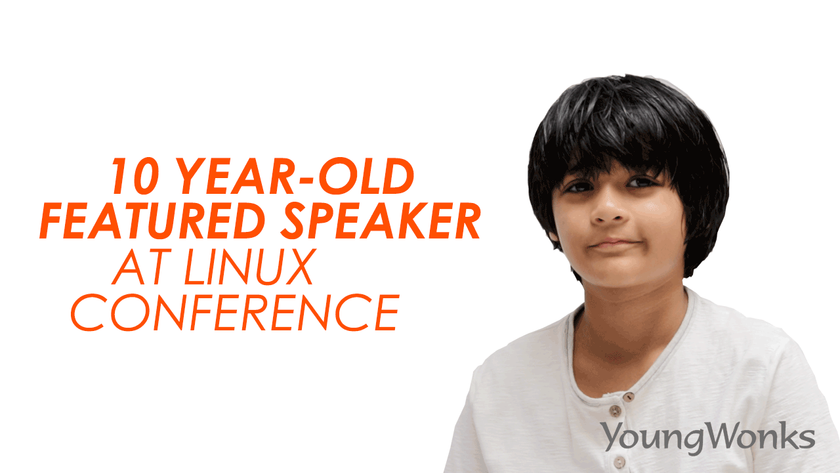 Kairan Quazi may be only 10 years of age but a quick online search for the name will tell you that he is unlike most 10-year-olds. Indeed, Kairan has become a celebrity of sorts even as he bags one achievement after another. For starters, he started going to college last year, at the age of 9. Says the now 10-year-old Kairan, “I attend Las Positas College (LPC) and I am earning my Associate degrees in Mathematics and Physics. I hope to transfer to a 4-year institution in a couple of years. The administration, professors and other students are very supportive of me.”

In fact, he’s just been hired by his alma mater (LPC) to be a math tutor starting this fall. “I will be helping students who are taking algebra, trigonometry, statistics, and calculus,” says Kairan who will be featured in MIT Tech Review this fall. Moreover, he will be taking the high school exit exam in October and this will release him from state K12 mandatory attendance laws.

But perhaps his biggest achievement till date has been the fact that he’s a featured speaker at the Linux Foundation’s North America open source summit, aka the Embedded Linux Conference, that's slated to take place in San Diego this week (August 21-23, 2019). At the conference, Kairan will be speaking on a topic related to his summer research collaboration at Intel Labs. He reveals how the Linux Foundation executives saw his extensive media coverage and reached out to his parents. “I have worked with my mentors at Intel Labs to determine my conference topic and it will mostly be about our work related to the next generation development of Stephen Hawking’s communications system. This will be my first time speaking at a conference, so I am a little nervous. I better practice,” states Kairan, who will soon be wrapping up his Summer AI Research Mentorship at Intel Labs.

Interestingly, this is not the first time he’ll be presenting at a conference; in March this year (2019), he was invited by MIT and Intel Labs to the EmTech Artificial Intelligence Conference. “I had a lot of fun meeting the heads of AI at the large companies. I even chatted with Ms. Fei-Fei Li, the Director of Stanford’s Human-Centered AI Institute, and told her that she is quoted on the wall of the YoungWonks Coding School!”

Not surprisingly, Kairan - a member of Mensa, the high IQ society - also holds the distinction of being admitted into the prestigious Davidson Institute Young Scholars Program. Most recently, he was invited into the Johns Hopkins Study of Exceptional Talent in light of his impressive SAT results. All this, even as he attends 4th grade in the day at a gifted school in Sunnyvale, where their curriculum is really advanced and the subjects are integrated. For instance, last semester he learned about physics and economics by building and organizing a carnival with his classmates. “We even put together a business plan that we had to pitch to investors,” he points out.

Kairan also credits his coding school YoungWonks for his success. “I joined YoungWonks Coding Classes for Kids when I was 7. At the end of first grade, my computer science teacher suggested that I enroll in a coding school because I was already past the programs that the elementary school was offering. My parents called different coding schools in our area, but the other coding schools were only offering drag-and-drop programming for my age group. YoungWonks was willing to test my skills and allowed me to accelerate to real programming. It has taught me that people in power can change someone’s life if they keep an open mind and just take a chance on people. Because of YoungWonks, I was able to learn 12 other coding languages and prove to Intel Labs that I would be a valuable member of their team. Today, I am almost done with Level 4 and am learning how to build mobile apps. When I have the time, I serve as a youth mentor for the non-profit TriValley Coder Dojo, where I tutor students in Python.”

On the career front, Kairan doesn’t have a specific label yet, but he says that it probably won’t be anything traditional. “Maybe I will be an innovator in artificial intelligence or something else that suits my strengths at that time. Or…maybe…I might want to join the Directorate of Operations for the CIA and be a clandestine agent!!! But yes, right now I am passionate about coding, science, and math so I spend a lot of time learning these subjects. I recently received my first certification in Deep Learning and am learning how to build neural networks using Python. I will be joining Intel Labs as a summer Research Collaborator in one of their artificial intelligence divisions – they were very impressed by my advanced abilities in coding and math.”

So how is he dealing with the media attention coming his way? Kairan replies that his parents filter filter media enquiries and then let him decide whether he wishes to participate. “I have done interviews with Huffington Post, Good Morning America, KRON4 News, KTVU News, San Francisco Chronicle and Pleasanton Weekly. I don’t really mind the media attention. Although I do find it weird and cringey to see myself on TV! So I have not watched any of my interviews!”

Lastly, ask him if there is a message he’d like to share with his fellow youngsters and Kairan is quick to emphasise the importance of learning coding. “Even if your interest is not in technology or the sciences, I think coding is a very versatile skill – it stretches the brain to think differently and is usable in every industry now, even in video gaming, music production, art and writing,” he says.