Which computers and devices are most suitable for online lessons as part of distance learning? We tell you in this blog

Our latest blog shares the most suitable devices one needs for a smooth, convenient online learning experience 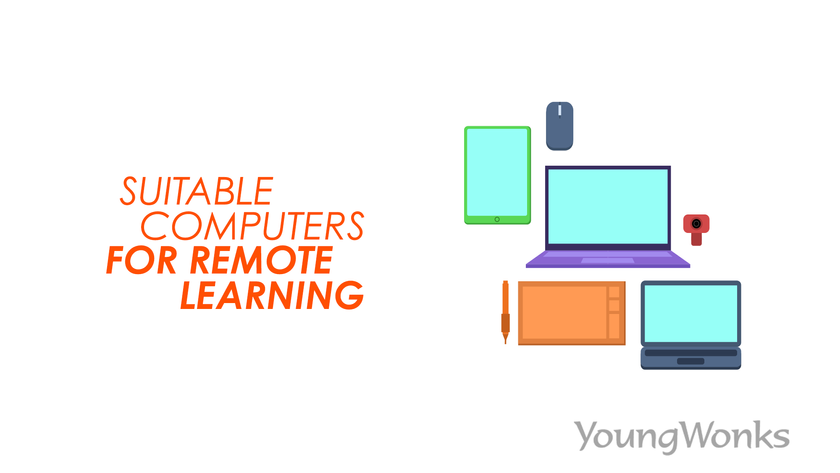 An ideal computer for remote learning is one that works well with external accessories such as an external keyboard / mouse, makes it easy for people at both ends of the video call to show/ share one’s screen with the other and similarly, allows both parties to use digital ink - so as to annotate aka point out/ highlight certain sections - on their own and the other person’s screens. Of course, these are in addition to basic features such as good processing power (8GB RAM or higher, since screen sharing software typically takes up alot of RAM and with the video on, even more processing power is needed at both ends of the video call), decent storage capacity (128 GB or higher SSD or hard drive), a modern processor from a reputed brand (say, an Intel i5 and above or AMD FX-4300 processor or above), a functional microphone and speakers, web camera and sound card, among others.

Below we take a look at computers or computer devices that are suitable for remote learning.

A tablet computer, aka tablet, is a mobile device that comes equipped with a mobile operating system, a touchscreen display and a rechargeable battery in a thin and flat package. Tablets are computers in that they do what other personal computers do, but lack some input/output (I/O) abilities that others have. Modern tablets typically look like modern smartphones, only they are relatively larger than the latter, with screens 7 inches (18 cm) or larger (measured diagonally) and may not offer access to a cellular network (though many do). Both iPads and pen tablets are common examples of tablet computers.

iPad: A line of tablet computers designed, developed and marketed by Apple Inc., iPads run the iOS and iPad OS mobile operating systems. Typically, iPads can be hooked up to external keyboards, so that is a big plus. But the external keyboards for iPads - also known as type covers - come at an extra cost. Also, typing on the device usually takes time; often one needs to use both hands. Moreover, screen sharing - especially for a coding class - is not very convenient either, especially with the video camera on at the same time. These factors go against the iPad, since ideally, a computer used for remote learning should allow seamless communication between both parties - the teacher and the student - which means that the student should be able to get his/ her work easily vetted by the former.

Among the iPads available out there, currently the Apple 10.2-inch iPad is said to be a rather useful buy for school students. Priced at around $329, the tablet continues to be used for online classes and school work. And thanks to the recent addition of mouse and trackpad support to iPadOS, the tablet can be paired with a keyboard to convert it into a mini computer, which makes it more convenient to use.

Perhaps why the Department of Education (DOE) has chosen to purchase thousands of iPads for New York school students. Reports say that this decision was also influenced by the fact that Apple could commit to manufacturing devices on a large scale in a short period of time and offer connectivity without WiFi to students.

Pen tablets: A pen tablet or graphics tablet is a computer input device that lets a user hand-draw images, animations and graphics, using a special pen-like stylus, in much the same way as a person drawing images with a pencil and paper. A pen tablet can thus be used to trace an image from a piece of paper which is taped or otherwise connected to the tablet surface. These tablets have also been used to capture data or handwritten signatures.

A pen tablet comprises a flat surface upon which the user can etch / draw / trace an image using the attached pen-resembling stylus. The image drawn is displayed on the computer monitor, though some graphic tablets now also have an LCD screen for a more realistic or natural experience. This means that a teacher and student can easily use the pen tablet’s screen as a drawing/ writing board to jot down, explain, understand and clarify concepts.

There are several pen tablets available in the market; they offer access to the App/ Play Store and Internet browsers too, which means most remote learning services and apps are a click away.

Windows computers / Macs: Computers and laptops running on Windows or Mac OS are typically the safest bets when it comes to picking out a computer for remote learning. They are typically sturdy, come with decent processing power and storage, good camera, mic and speaker and most importantly, one can screen share and annotate on one’s own and the other person’s screen during an online class. Of course, the web browser app doesn’t allow annotation so it is advised to download apps and then use them for online learning. There are several apps available on the App Store and the Play Store, downloading and installation of which allow the online class to become an unencumbered experience.

Windows PCs are made by several companies and it is recommended to go for laptops from brands that offer good customer support in your city of residence in case any problems crop up. Also, it is better to opt for the latest / current model as it is upto date and typically offers a lifespan of a good 5 years from the purchase. These laptops may be more expensive than older models but they also last longer than the latter.

Among Macs, the MacBook Air (13 inch) is a good option. With 128 GB SSD, 8GB RAM and the ability to be connected to an external monitor, keyboard and mouse, it can be used for online classes.

Chromebooks: Chromebooks are laptops or tablets that come fitted with the Linux-based Chrome OS. Tasks on these devices are carried out using the Google Chrome browser, with most applications and data stored in the cloud instead of the machine itself. All Chromebooks released since late 2017 can also run Android apps.

A rather popular notebook among US public schools, Chromebooks are said to have taken up 60% share of computers purchased by schools in the country by March 2018. While they can be used for attending online classes, Chromebooks have one big disadvantage: they do not allow the other party to annotate on their screens. This is because Chromebooks do not allow standalone desktop apps but only browser-based app access. This translates into limited functionality, especially when it comes to screen-sharing apps such as Zoom. In other words, a teacher cannot draw or highlight a particular para or line or corner of the student’s screen to make his / her point. So while they can be used well in classes where one just has to take notes, a more interactive class with more detailed inspection may find Chromebooks wanting.

On the bright side, there’s quick access to Google’s Chrome browser and the Android app catalog in the Play Store, plus Chromebooks aren’t really that expensive (which is why they are favoured by schools).

In addition to the above devices, one can make the online learning experience even better by using accessories such as wireless mouse, laptop stand, USB hub, printer, ergonomic furniture and noise cancelling headphones. In fact, the active noise-cancellation technology of today can easily drown out sounds of any volume and one can even customize the amount of noise cancellation, allowing one to effectively control how much of the outside world you wish to hear or not hear.