Finding the resistance of a resistor 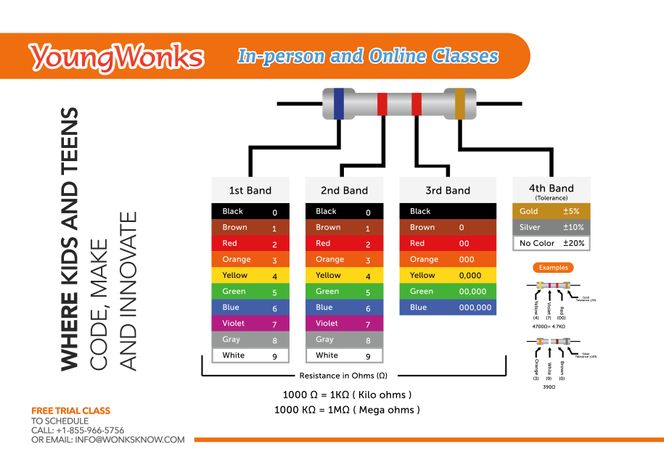 Resistor color code is commonly used to find the resistance of a resistor. The color coding technique is explained in this blog.

But before that let’s take a quick look at what is a resistor. A resistor is a passive two-terminal electrical component that implements electrical resistance as a circuit element. In electronic circuits, resistors are used to reduce current flow, among other uses.

All resistors wear a certain number of colored bands; in this blog, we will be looking at how one can find the resistance of four-band resistors using the color-coding method.

The color coding technique is quite simple and involves each color being associated with a number between 0 and 9.

In the above image, we see a resistor where the first band is blue, the second and third bands are red and the fourth band is gold. Now, the first color blue is associated with 6 and the second color red is associated with the number 2. Placing these two numbers (6 and 2) next to each other in the corresponding order will give you the two digit number 62. To this, we add two zeros on the right as the third color red is associated with the number 2. This gives us a resistor value of 6200 ohms. You can also write it as 6.2 kiloohms or 6.2 KΩ.

This is how one can use the color coding technique to find the resistance of a resistor.

Shared below is a video explaining the same: