What is 5G technology and how dangerous can it be? Read our blog to know more about the safety and health concerns associated with 5G technology 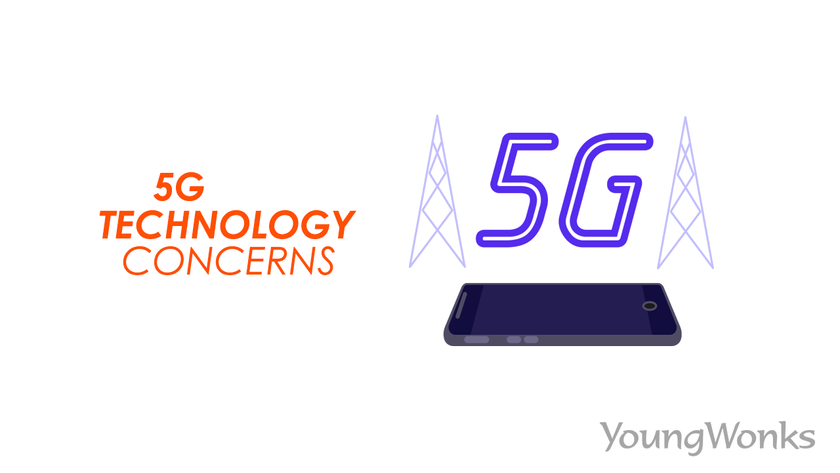 First let us take a look at the meaning of the term mobile technology.

What is Mobile Technology?

Mobile technology refers to the technology used on a mobile phone; in other words, it is the technology that makes cellular communication possible. The rawest form of this technology has been the mobile code-division multiple access (CDMA) technology. It is a kind of platform that works through transmitters that can send data at the same time on a single channel; this technology has evolved rather quickly over the years. Since the 2000s, the mobile device has seen many avatars: it has gone from being not much more than a simple two-way pager to being a mobile phone, GPS navigation device, an embedded web browser and instant messaging client, and a handheld gaming console. Experts say that the future of computer technology lies in mobile computing with wireless networking. Today, mobile computing through tablets are also commonplace.

The different mobile phone generations widely deployed so far have been 0G, 1G, 2G, 3G and 4G. If you wish to read more about these mobile phone technologies, you can read our blog here: https://www.youngwonks.com/blog/Mobile-Phone-Technologies-Over-The-Years

What is 5G technology?

5G refers to the fifth-generation cellular network technology that provides broadband access. These are digital cellular networks, where the service area covered by providers is divided into small geographical areas called cells. Analog signals representing sounds and images are digitized in the phone, converted by an analog to digital converter and transmitted as a stream of bits.

5G networks, like its predecessors, work thanks to signals carried by radio waves that are transmitted between an antenna or mast and our phones. However, 5G uses higher frequency waves than older mobile networks, as it offers more devices greater access to the internet and at faster speeds. These waves will have to travel shorter distances through urban spaces, so 5G networks need more transmitter masts than earlier technologies, positioned closer to ground level.

The industry standard association 3GPP describes any system using 5G NR (5G New Radio) software as 5G, a definition that has been in use since late 2018. Some of the initial yet fairly substantial deployments are the ones made in South Korea in April 2019. Today, South Korea, the United Kingdom, Germany, and the United States are the countries leading the 5G deployment wave.

In the US, telecom company Verizon has offered 5G service on a limited number of base stations in Chicago and Minneapolis. It is said that in May 2019, download speeds in Chicago ranged from 80 to 900 Mbps, while upload speeds varied between 12 to 57 Mbps. It was also reported the same month that Verizon’s 5G service would regularly hit 1 Gbps in some areas.

Today in 2020, all major telecommunication service providers in the developed world are deploying antennas or plan to deploy them soon. The frequency spectrum of 5G is divided into millimeter waves, mid-band and low-band. Low-band uses a similar frequency range as 4G. 5G millimeter waves are the fastest, with actual speeds often being 1–2 Gb/s down whereas frequencies are above 24 GHz reaching up to 72 GHz. Millimeter waves have difficulty traversing many walls and windows, so indoor coverage is limited.

5G mid-band is the most popular, having been deployed in over 20 networks. Speeds in a 100 MHz wide band are usually 100–400 Mb/s down. In the lab, speeds are said to cross a gigabit per second with frequencies deployed ranging from 2.4 GHz to 4.2 GHz. Many areas are being covered just by upgrading existing towers, which lowers the cost.

Not only is 5G going to be used in mobile operator networks, it is also expected to find takers in private networks with applications in industrial IoT, enterprise networking, and critical communications. Early 5G NR launches will rely on existing LTE (4G) infrastructure in non-standalone (NSA) mode (5G NR software on LTE radio hardware), before the standalone (SA) mode (5G NR software on 5G NR radio hardware) is ready.

5G technology is yet to replace 4G but there are several concerns cropping up around the use of these networks.

There already has been much talk about the adverse effects of radiation from mobile phones and cell phone towers (think reports about 4G mobiles causing headaches, fatigue and irritability), but 5G radiation is being said to be even more dangerous, mainly because 5G uses higher microwave frequencies as compared to the frequencies usually used by 4G. What’s more, the higher millimeter wave used in 5G does not easily penetrate objects, and this means that 5G will need the installation of antennas every few hundred meters, thus increasing the potential exposure and danger to people in general.

In fact, scores of scientists have carried out peer-reviewed research on the biologic and health effects of nonionizing electromagnetic fields (EMF) and they have signed the International EMF Scientist Appeal. The appeal spells out the scientists’ concerns that EMF can cause severe health issues including structural and functional changes of the reproductive system and neurological disorders and in turn demanded stronger exposure limits.

But at the same time, it is also being said that the World Health Organization (WHO) has not yet found conclusive evidence establishing the above concerns. Some cancer researchers have instead stated that health risks from exposure are only possible higher up the electromagnetic spectrum, well beyond those frequencies used by mobile phones.

The fact remains that at least part of the 5G spectrum allowed under international guidelines falls within the microwave band. Microwaves are known to produce heat in objects through which they pass. Thus there is worry that using 5G technology is likely to cause radiation-related health problems and already many countries are taking measures to fight this.

For example, recently, Switzerland placed an indefinite moratorium on the use of its new network. Reports say that although the European country has built more than 2,000 antennas to upgrade its network, the future of 5G in the country has run into trouble since the Swiss environment agency, Bafu, has sought more time to examine the impact of 5G. In April 2019, a 5G trial was blocked in Belgium’s Brussels because of radiation laws.

Similarly, in August 2019, a court in the USA has decreed that 5G technology will not be deployed without assessing its environmental impact and effect on historic preservation.

The debate continues even as 5G critics point out how the millimeter wave frequencies used by 5G have not yet been extensively tested on the general public.

For instance, a report published by the European Commission and European Agency for Cybersecurity shares the security issues surrounding 5G even though it refrains from mentioning Huawei. It may be pointed out here that while Nokia and Ericsson are the only European manufacturers of 5G equipment, Huawei’s equipment is widely used around the world due to its low cost. The report goes on to warn European nations against depending upon a single supplier for a carrier’s 5G infrastructure, especially those based outside the European Union.

Similarly, in February 2020, the Wall Street Journal too reported how Huawei has had the ability to covertly exploit surveillance backdoors meant for law enforcement officials since 2009. These backdoors are found on carrier equipment like antennas and routers.

As a result, many countries (including Australia and the United Kingdom as of early 2019) have taken actions to restrict or eliminate the use of Chinese equipment in their respective 5G networks even as Chinese vendors and the Chinese government refute these claims.

Several researchers have also cited that 5G technology can leave us vulnerable to a new posse of security threats. The big concern is that for a technology that will be making possible the movement and access of huge quantities of data, including sensitive personal data, 5G technology has not been sufficiently tested even though its adoption can only widen the attack possibilities.

Various network security companies such as Fortinet, Arbor Networks, A10 Networks, and Voxility have recommended personalized and mixed security deployments against massive distributed denial-of-service (DDoS) attacks that could be likely post widespread 5G deployment. IoT devices - considering how dependent they are on the Internet and how popular they are becoming now - would be particularly susceptible - be it to DDoS attacks, cryptojacking or other cyberattacks.