How Learning Coding Can Help You With Critical Thinking 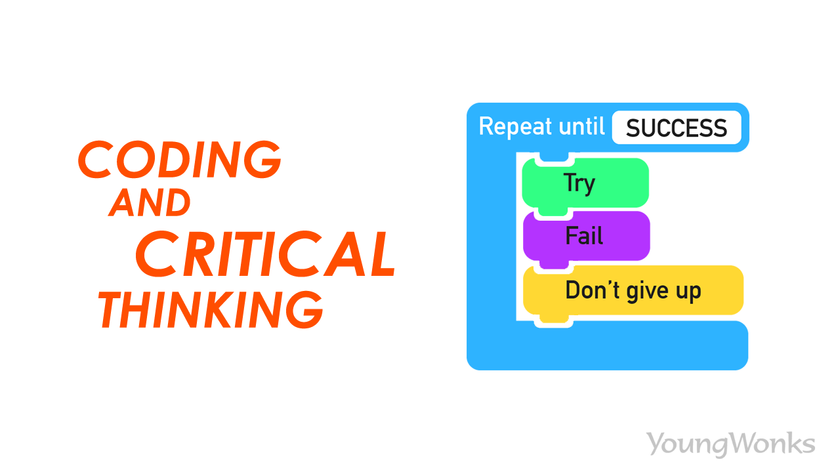 That learning coding has many benefits to it is well known fact. At a time when we have all come to rely heavily on computers and smartphones on a daily basis, it is not surprising to see how coding, aka software programming, is in great demand today. What, however, is often underplayed is the role of coding in teaching critical thinking.

What is Critical Thinking?

Critical thinking, to put it simply, is the objective analysis of facts to form a judgment. It is self-monitored, self-corrective thinking that mandates rational, skeptical, unbiased evaluation of factual evidence, which, in turn guides, one to take a particular course of action. This is also why it is described as the ability to choose a certain belief or action after careful consideration of the data available. By its very nature, critical thinking encourages a creative, problem-solving approach.

While critical thinking is crucial in professional life, it is also extremely important in day-to-day life. So on one hand, one may argue that Charles Darwin used a critical thinking mindset to come up with his theory of evolution as it involved him questioning and connecting the aspects of his field of study to others. At the same time, critical thinking is also the skill set one employs when doing something as simple as assessing the authenticity of a particular email. So asking oneself questions such as, “Who emailed this to me?”; “Why have I received this email?”; “What sources are being cited for the information shared in the email”; “What is the purpose behind this email?” and “Are they who they claim to be in the email?” come under the purview of critical thinking as it helps one arrive at a logical solution to the given problem (in this case, determining if the email is spam or not).

Similarly, making a decision about something as mundane as what bag to buy can also involve critical thinking. Given the popularity of e-commerce, one may have a plethora of options available but this also means one needs to factor in things before making a choice for the purchase. So a person looking up blogs, websites and forums to read reviews about bags is, in fact, employing critical thinking.

1. A similar approach to problem solving: Coding and critical thinking have these process steps in common: a) Identifying a problem or task b) Analyzing the given problem/task c) Coming up with initial solutions d) Testing e) Repeating the process for improved results. A good example of this process in coding is troubleshooting, as this is where programmers need to identify issues and try different tactics until they find a strong solution.

2. Practice reigns supreme: Coding promotes thinking differently by approaching a problem from different angles and thus coming up with as many possible solutions as possible. This iteration during the coding creation process lets students practice their critical thinking skills in every class session.

3. Having an open mind: What if there’s no one right answer to a problem? In coding, this is a rather common scenario as there are multiple correct answers in the coding creation process. For instance, each website, animation, or game will be different from the other depending on the design aesthetics of the user, the functionality, and the technology available. This variability exposes students to the reality that one must be open to new ideas and stay flexible. This, in turn, paves the way for constant improvements.

What the studies and experts reveal

Vishal Raina, founder and senior instructor at YoungWonks, sums it up well by emphasising how the tech field thrives on critical thinking. “Since the tech industry is driven by innovation more than anything else, critical thinking plays an integral role in a coder’s career. After all, coding literally has one use syntax and semantics to deal with problems,” he says, adding that a coder’s job also requires perseverance, which means that he / she has to keep going when even they come across an obstacle. “When you come across a dead end in coding, there’s always a way you can go back and start again. This attitude encourages thinking outside the box and is thus tremendously helpful not just in coding but even in other fields.”