Read this blog to understand how autonomous and automated driving technologies came about, how they differ from each other and how they are going to revolutionize the way we travel 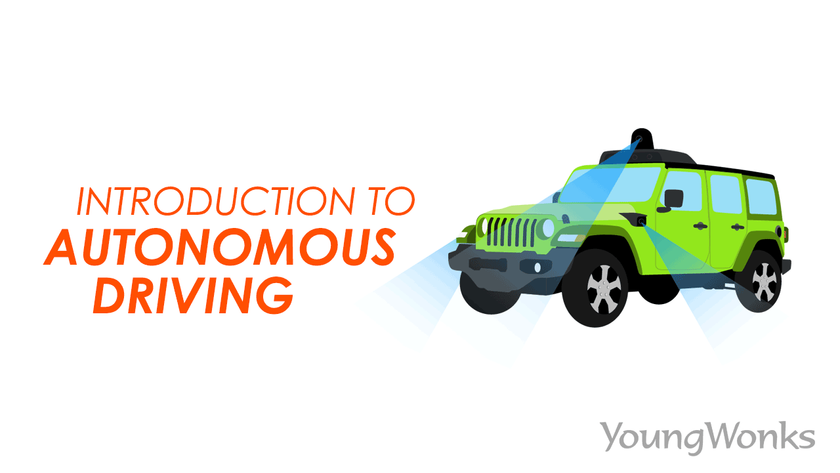 In tech circles, we have heard the term autonomous driving quite often. So what is autonomous driving? How is it different from automated driving? This blog delves head first into these two related concepts and how they have revolutionized the automobile industry today.

What are Autonomous and Automated Driving?

Autonomous driving technology refers to the technology that has made possible the phenomenon of self-driving cars/ vehicles. These cars are also known as robot cars or driverless cars (because there is no human driver and the car/ vehicle is driving itself). Typically, such a car has the ability to sense its environment and move with little or no human input.

In other words, ‘Autonomous’ refers to satisfactory performance under significant uncertainties in the environment and the ability to make up for system failures without any external intervention. ‘Automated’ is when there’s a human driver in the vehicle who is in turn relying on a communication connection to the Cloud or other vehicles, and when the vehicle does not independently choose destinations or routes.

In fact, the US organization Society of Automotive Engineers’ International (aka  (SAE International) has come up with a classification system for vehicles/ cars based on six levels - starting from those fitted with fully manual systems (level 0 with only the system issuing automated warnings but having no control whatsoever over the vehicle) to those equipped with fully automated systems (level 5 with no human intervention needed, say a robotic taxi). The classification factors in the degree of driver intervention and attentiveness required, rather than the vehicle capabilities.

The question that comes to mind then is how does this happen? The answer lies in the fact that these cars are fitted with an array of several sensors that help the car/ vehicle to perceive its surroundings, such as radar, computer vision, Lidar, sonar, GPS, odometry and inertial measurement units. There’s also advanced control systems that help interpret this sensory information and thus identify the correct navigation paths, by avoiding any obstacles and recognising relevant signage.

Automated Driving Systems (ADS) have been around at least since the 1920s; that’s when some of the first experiments in the field are said to have been conducted; the trials, on the other hands, started in the 1950s. Not surprisingly, it was Japan’s Tsukuba Mechanical Engineering Laboratory that came up with the first truly automated car, back in 1977. The car tracked white street markers, which were interpreted by two cameras on the vehicle, using an analog computer for signal processing. Aided by the support of an elevated rail, the vehicle could reach a speed of up to 30 kilometres per hour (19 mph).

As far as autonomous prototype cars go, several of them have appeared on the scene since the 1980s - starting with the Carnegie Mellon University’s Navlab, the ALV projects funded by DARPA starting in 1984 and Mercedes-Benz and Bundeswehr University Munich’s EUREKA Prometheus Project in 1987.

In recent years, the automotive and energy company Tesla has been making significant inroads in the field of automated and autonomous driving. In 2015, the company rolled out version 7 of their software in the U.S. that included Tesla Autopilot capability. In January 2016, Tesla released a version 7.1 as an over-the-air update, adding a new ‘summon’ feature that lets cars to self-park at parking locations without the driver in the car. Tesla’s automated driving features are currently classified under level 2 (driver assistance system). This means that such a car offers automation but requires the full attention of the driver, who must be ready to take control at a moment’s notice.

In December 2015, Tesla CEO Elon Musk announced that a completely automated car would be introduced by the end of 2018, but in December 2017, he declared that it would take another two years to launch a fully self-driving Tesla onto the market.

The same year (2017), Audi went on to state that its latest A8 would be automated at speeds of up to 60 kilometres per hour (37 mph) wherein the automation would come in thanks to its “Audi AI.” The driver would not need to carry out safety checks such as frequently gripping the steering wheel.

Similarly, Waymo, a self-driving technology development company, also a subsidiary of Alphabet Inc, announced in 2017 that it had begun testing driverless cars without a safety driver in the driver position, although there was still an employee in the car.  In October last year (2018), the company shared that its test vehicles had traveled in automated mode for over 10,000,000 miles (16,000,000 km), going up by about 1,000,000 miles (1,600,000 kilometres) per month. In December 2018, Waymo became the first company to commercialize a fully autonomous taxi service in the U.S.

Uber, on the other hand, has faced greater troubles as part of the testing of their self-driven cars. The company may have clocked 2 million miles (3.2 million kilometers) in automated mode, but in March 2017, an Uber test vehicle was involved in a crash in Tempe, Arizona. A year later (in March 2018), another self-driving Uber vehicle hit and killed pedestrian Elaine Herzberg; this is the first death caused by a self-driving vehicle. This death prompted Uber to Uber pull out of all self-driving-car testing in California.

Advantages and Disadvantages of Autonomous Driving

Like most technologies, autonomous (and automated) driving technologies come with their own set of advantages and disadvantages.

Let’s first look at the advantages:

1. Reduced labor costs and overall welfare is a major advantage; even as we move towards self-driving cars, there would be no need for humans to drive, thus offering us an enhanced mobility experience, especially to the young, the elderly, people with disabilities and low-income citizens. Travelers would be relieved of their driving and navigation duties, leaving them with more time for leisure or work. This would also mean less constraints on the traveler’s ability to drive, and an overall relaxed travel experience as distractions, texting and intoxication would no longer impact driving. The removal of the steering wheel—along with the remaining driver interface and the need for any occupant to sit in a forward-facing position—would give the interior of the cabin greater ergonomic flexibility.

2. Greater safety is another advantage. Driving safety experts predict that the full development of driverless technology will do away with problems such as traffic collisions caused by human error (and the resulting deaths, injuries and other costs). Distracted and/ or aggressive driving is also slated to be substantially reduced. Consulting firm McKinsey & Company has estimated that widespread use of autonomous vehicles can “eliminate 90% of all auto accidents in the United States, prevent up to US$190 billion in damages and health-costs annually and save thousands of lives.” In fact, safer driving experiences can help bring down the costs of vehicle insurance.

3. Additional advantages potentially include higher speed limits, smoother rides, increased roadway capacity and minimized traffic congestion. Authorities would have greater ability to manage traffic flow thanks to the extra data and driving behavior predictability, along with less need for traffic police and even road signage.

4. Autonomous (and high levels of automated) driving will also have a huge positive impact in the fields of energy and environment. Vehicle automation can optimize the drive cycle and thus improve fuel economy of the car. Less traffic congestion and the better traffic flow due to widespread use of automated cars can also lead to higher fuel efficiency. Self-driving cars will be able to accelerate and brake more efficiently, which also means there will be less wasted energy.

5. Autonomous driving could lead to much lower need for parking space. Manually driven vehicles are said to be used only 4–5% of the time, and being parked and unused for the remaining 95–96% of the time. Autonomous vehicles, on the other hand, could be used even after they have completed one journey. For instance, after you reach work, you could send your car on some errands; this would dramatically reduce the requirements for parking space.

1. A direct impact of the widespread use of autonomous/ automated vehicles would be the loss of driving-related jobs, in turn leading to job losses in public transit services and crash repair shops. This would understandably meet resistance from from professional drivers and unions.

2. Loss of privacy is another major disadvantage, given how these automated/ autonomous vehicles’ locations and positions would be integrated into interfaces that other people could gain access to. Automotive hacking and terrorist attacks are also potential threats in such a setup.

3. Ethical and moral reasoning in the event of AI-controlled vehicles is also a big question. For instance, how does one program the software to react in a particular situation - for example, if the car is part of an unavoidable crash -  should the automated car crash into a bus, potentially killing people inside, in order to protect its own occupants or or swerve elsewhere, potentially killing its own passengers or nearby pedestrians? Whose safety takes priority? These questions need to be answered.

Now let’s look at some of the technological obstacles for automated/ autonomous cars:

a) For one, AI is not yet at the stage where it can function properly in chaotic inner-city environments.

b) As mentioned earlier, automated/ autonomous vehicles’ computers are vulnerable to threats, especially the communication systems between cars.

c) The sensing and navigation systems of these automated/ autonomous vehicles are still not ready to handle all different types of weather (such as snow) or deliberate interference, including spoofing and jamming.

d) Avoiding large animals needs high quality recognition and tracking, and that’s something that’s yet to be achieved fully.

f) Field programmability for the systems will mean a need for careful evaluation of product development and the component supply chain.

h) The deployment of automated/ autonomous cars on the road can also be hampered by government over-regulation, or even uncertainty about potential future regulation.

i) Also, companies working on automated/ autonomous cars technology are increasingly facing a talent shortage since the supply has not kept up with the demand.

While much still remains to be done before fully automated/ autonomous vehicles hit the road, it is a matter of time before these vehicles become a reality. Needless to say, these vehicles will signal the beginning of a new era, one faced with its own challenges and armed with its own abilities. On one hand, one could expect a rise in the number of taxis available for transport as there will be a reduced dependence on human drivers. It is also being said that shared mobility will be the future, one where self-driven vehicles will be the main mode of transportation. This means that whichever company has self-driven cars is poised to make large profits.

The healthcare industry might suffer a loss even as human driver injuries and / or deaths reduce drastically. Car repair and car insurance industries too would be impacted in such a way that there are less accidents, lower repairs and thus lower insurance payouts.

Not only will these automated/ autonomous cars be used for rescue, military and emergency purposes, but the car design and entertainment industry might have to do a rethink too, even as humans are less concerned about the driving aspect and focus their energies on better car decor and in-car entertainment.

It is also being said that the telecommunications and energy industries will receive a huge boost since automated/ autonomous vehicles will required huge amounts of data to be transferred and analyzed.

Watch our video to know more: