Thermal Imaging Cameras and Their Applications

An introduction to thermal imaging cameras which are no longer just used for firefighting, but also as the first line of defence against Coronavirus

Even as the Covid19 pandemic continues to rage across the world, companies and organizations are limping back to normalcy with the help of several technologies, including the use of thermal imaging cameras at entry points. In this blogpost we take a look at these cameras, how they work and where they can be used 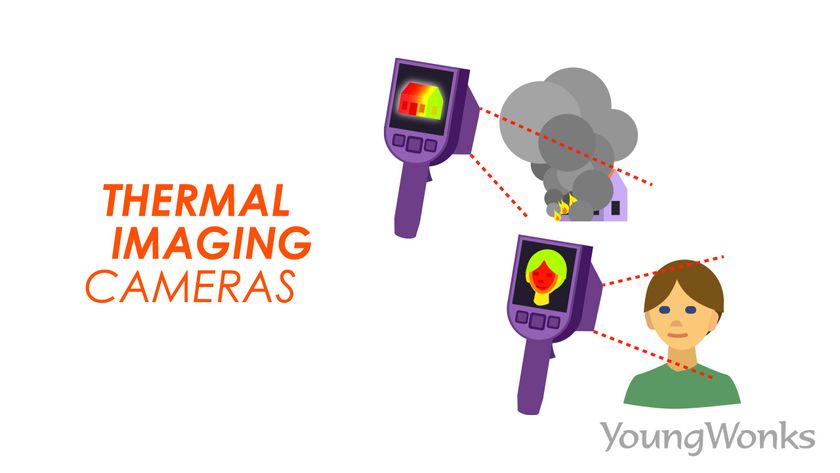 Even as COVID19 continues its march across the world, not only are time, effort and money being invested on coming up with vaccines to fight the dreaded Coronavirus but they are also being used to better harness the latest technologies and devices that can help us deal with this unprecedented situation. One example would be that of thermal imaging cameras. While thermal imaging cameras are by no means a definitive way of diagnosing anyone as COVID19 positive, they are being used extensively in the fight against the ongoing pandemic, since they detect temperature variations and help look out for people with high temperature who are typically more likely to have been affected by the virus.

What is a thermal imaging camera?

How do thermal imaging cameras work?

Thermal imaging cameras read the temperature by recognizing and recording the different levels of infrared light. This light could be invisible to the naked eye, but it will be captured by the thermal imaging camera as heat if its intensity is high. In fact, all objects emit some kind of infrared radiation; this is one of the ways through heat is transferred. For instance, when you hold your hand over hot coals on a grill, those coals are emitting a lot of infrared radiation, and the heat is being transferred to your hand. Even the sun’s energy - at least half of it anyway - is not visible light; instead it is a mix of infrared and ultraviolet light.

To put it simply then, a thermal imaging camera allows one to see a person or an object’s heat radiating off themselves. Thermal cameras then record the temperature of the various objects in the frame. Typically, each temperature is assigned a shade of a color, which lets one see how much heat it's radiating in comparison to the objects surrounding it. Colder temperatures typically get denoted by shades of blue, purple or green, while warmer temperatures are indicated by red, orange or yellow.

The hotter an object is, the more infrared radiation it produces. Thermal cameras read this radiation and convert it to an image that we can then see with our eyes, the way a night vision camera catches invisible infrared light and converts it to an image for our eyes to see. However, a typical night vision security camera can only record shorter wavelengths of infrared whereas most thermal cameras can read longer wavelengths of infrared thus allowing them to detect heat.

The main criteria to watch out for in a thermal imaging camera are the detector resolution and the thermal sensitivity. Since each pixel has a temperature associated with it, there are thousands of temperature data points that can be referred to. Here too, higher resolution cameras produce much clearer images; a decent spatial resolution is needed for the thermal camera to accurately read the skin surface temperature. Typically though, cameras used for measuring Elevated Body Temperatures (EBT) screening have resolutions of only around 320 x 240 pixels or 640 x 512, which is quite low in comparison to traditional surveillance cameras.

Since these cameras show infrared radiation as visible light, they effectively allow the user to see areas not visible to the naked human eye. This means firefighters can use it to detect areas of heat through smoke, darkness or heat-permeable barriers. However, they are not the only ones who use these cameras.

For instance, law enforcement agencies use thermal imaging cameras for their surveillance activities, including locating and catching suspects, investigating crime scenes and carrying out search and rescue operations. These cameras detect heat emitted by an object or a person and thus help find vehicles or individuals in a predetermined area. Power line maintenance technicians use these cameras to be able to zero in on overheating sections which in turn helps them prevent potential failures. In places where thermal insulation has developed faults, building construction technicians use these cameras to look out for heat leaks and thus maintain the efficiency of heating and / cooling systems.

Next, we come to tracking physiological changes such as fever; these can be monitored thanks to thermographic imaging. Thermal imaging cameras can detect EBT without direct contact; thus a person with high body temperature can be immediately screened for additional symptoms. This also explains the currently widespread use of thermal imaging cameras. Given the rampant spread of COVID19 and the fact these cameras are said to be able to detect body temperatures with an average accuracy of 3.2-degree Fahrenheit, they are a sort of first line of defence for employees, patients and the public.

At this point, it is essential to note how skin facial temperature correlates to core body temperature. Based on scientific research, the most reliable spot in the human face is the eye canthus, which is a small area over the tear duct. Also, thermal imaging cameras do not spot any virus or infection on their own; so they do not offer any final, indisputable diagnosis for COVID19. In other words, these cameras alone cannot detect the infected people, especially those with other symptoms or no symptoms at all (also known as false negatives). They can only help zero in on those with a fever which again may or may not have been caused by the Coronavirus.

So one must bear in mind to not be lulled into having a false sense of security just because one has passed by a thermal imaging camera. But yes, thermal imaging cameras are quite useful in public places, even schools since there are too many people in such situations and it is difficult to check each individual’s temperature and symptoms. They are quite convenient to use and keep authorities from having to go around taking people’s temperature all the time.

Since thermal energy can be reflected off shiny surfaces, these cameras are not able to see through glass. And as mentioned earlier, thermal imaging cameras can be used to collect information about the inside of a wall, but they cannot see through the walls themselves. The same holds true for all solid objects - be it clothing, bags etc. They cannot be considered as the only deciding factor; it is imperative to use other ways to confirm a hypothesis.

Variables such as makeup, physiological stress, sweating, insufficient camera resolution, measuring the wrong location on the face and subject motion also come in the way of accurate results. Another big disadvantage is the fact that the range of thermal imaging cameras is subject to change under conditions such as rain and heavy fog. This is because droplets of water too exude light.

To conclude, with the highly contagious Covid19 continuing to spread across the world, businesses and organizations will have to practice social distancing and stringent cleaning protocols even as they reopen. They will also have to be continuously on the lookout for people who may have the virus and right at the entry itself at that. This is where thermal imaging cameras - despite the above mentioned criticisms - shall continue to play a crucial role.