Computer vision, machine learning, hyperautomation, blockchain and IoT are among the top 10 technology trends for 2020 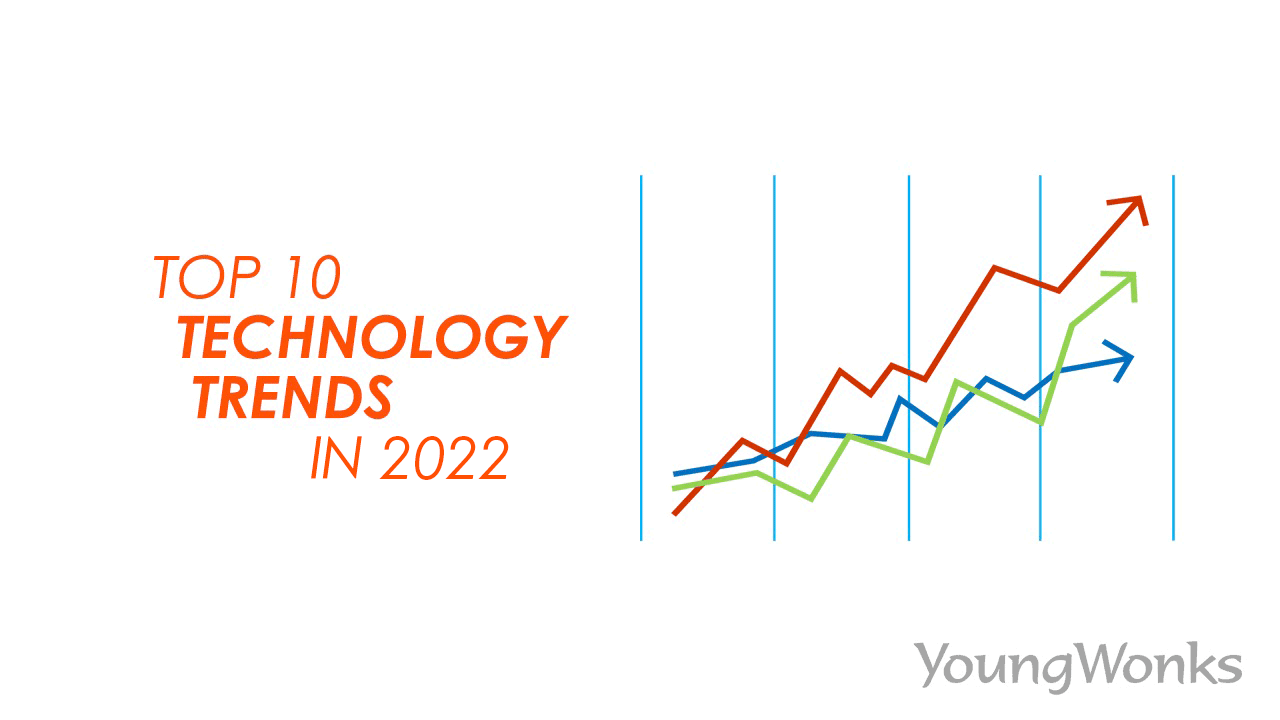 Which are the top 10 technology trends in 2020? This blog takes a close look at what will matter in the technology sector in the coming year. The world of technology is ever-evolving and with technologies fighting each other for supremacy, many have already affirmed their disruptive potential. These then are the technologies that promise high impact on today’s environment and thus already have or are likely to have a wide user base in the year ahead. Keeping this in mind, here are the top 10 technology trends for 2020 in alphabetical order:

Artificial Intelligence (AI) and Machine Learning (ML) are expected to continue to be at the forefront in 2020. On one hand, they will have scores of applications in assisting human decision making, but there will also be significant new challenges for security teams and risk leaders due to a big increase in potential points of attack in areas such as Internet of Things (IoT), cloud computing, microservices and highly connected systems in smart spaces. This means that protecting AI-powered systems, using AI to enhance security defense, and anticipating abuse of AI by attackers will be a top priority.

Autonomous driving technology refers to the technology that has made possible the phenomenon of self-driving cars/ vehicles. These cars are also known as robot cars or driverless cars. Companies such as Tesla are already showing us what autonomous things can do and the limitless potential is only going to be explored further this year. From autonomous vehicles to robots and drones, advanced AI is now ushering in an era where these vehicles interact more naturally with their surroundings and with people. And while autonomous vehicles are yet to become commonplace, the year 2020 is expected to see lots of progress in this field. Other than cars, trucking and shipping are said to go the autonomous way.

And of course, there is scope for many changes to laws, existing infrastructure, and social dispositions associated with autonomous driving. Overall, in 2020, one can expect to see the discussion about autonomous driving move beyond the confines of the tech world.

Blockchain technology is a type of distributed ledger that offers greater transparency and lower friction across business ecosystems thus lowering costs and transaction time and improving cash flow. It is being hailed as the antidote to central authority-driven institutions such as banks, clearinghouses, governments and many other institutions. From important legal documents such as passports and birth, death and marriage certificates to medical records, elections and smart contracts, the possibilities with blockchain seem limitless, especially in the areas of identity management and asset tracking. Smart contracts can be programmed into the blockchain so as to have events set off actions; for instance, payment can be released once the goods are delivered. Blockchain technology is constantly evolving and it is being said that the coming year will see a refined version being used, one with complete blockchain solutions.

In 2020, computer vision equipped tools and technology are expected to become more popular than ever. For instance, computer vision has a key role to play in autonomous vehicles, as they need to “see” and avert danger. Production lines too need computer vision cameras to look for flawed products or equipment disappointments, and surveillance cameras are anyway being used to alert us to anything out of place. Face recognition too needs computer vision; all of which are good reasons to say that computer vision will be a key tech trend in 2020.

Digital ethics is the field of study that focuses on the way technology is shaping up and how it will influence our political, social, and moral existence. In the Internet age, it is no wonder that digital ethics and privacy have come to assume importance. If anything, this is a field that is gaining traction even as individuals, organizations and governments battle virtual safety problems. A lot of personal information is available online today and maintaining its privacy is serious business. Organizations are now realizing how imperative it is to proactively address these concerns.

With climate change and global warming posing bigger threats than ever, the coming year will see a marked shift towards production of green energy. Green energy refers to energy from natural, renewable sources such as sunlight, wind, rain, tides, plants, algae and geothermal heat. While solar energy has been around for quite some time now, it is expected to get more popular and mainstream, particularly thanks to recent developments in this field. For starters, batteries are becoming much cheaper than before, which means more and more people will be able to store solar energy in these batteries and consume it at night. For instance, Tesla is already producing rechargeable lithium-ion battery stationary energy storage products such as Powerwall and Powerpack. Similarly, home solar batteries by Sunrun allow for easy installation in different parts of the home.

Hyperautomation is where many machine learning (ML), packaged software and automation tools come together to deliver work. Hyperautomation obviously involves automation in a comprehensive manner, including stages such as discovery, analysis, design, measurement, monitoring and reassessment. It covers automation mechanisms and how they can be used together. One of these mechanisms is robotic process automation (RPA), which is the automation of clerical processes that show rigid patterns and limited boundary conditions like loan processing and quote-to-cash.

The world of immersive experience covers Virtual Reality (VR), Augmented Reality (AR) and Mixed Reality (MR). VR is an interactive computer-generated experience taking place within a simulated environment (that can be similar to the real one or fantastical) and mainly including auditory and visual feedback. Meanwhile, AR is a kind of VR in that it is an interactive experience of a real-world environment where the objects in the real-world are “augmented” by computer-generated perceptual information. MR, on the other hand, is a hybrid reality of sorts, as it merges real and virtual worlds to produce new environments where physical and digital objects co-exist and interact in real time. All of these realities / simulations are being made possible by immersive technology that is highly useful in industries such as art, entertainment, video games and interactive storytelling, military training, education and even medicine (for example, distracting patients with VR). This immersive technology became more mainstream in 2019 and is expected to do well in many other industries such as immersive marketing and advertising in 2020.

Internet of Things refers to the network that allows devices, vehicles, and home appliances (containing electronics and software items) to connect, interact and exchange data. So it involves extending Internet connectivity beyond standard devices such as desktops, laptops, smartphones and tablets, to any kind of everyday object. Embedded with technology, these devices can communicate and interact over the Internet, in addition to being remotely monitored and controlled. IoT devices are a part of the larger concept of home automation, which can include lighting, heating and air conditioning, media and security systems; popular examples include Amazon Echo, Google Home and Apple’s HomePod.

Edge computing then is about computation mostly or completely done on distributed device nodes (i.e. smart devices or edge devices as they are known) as opposed to taking place in a centralized cloud environment. This kind of computation tries to keep information traffic and processing local, with the aim being to reduce traffic and latency. In 2020, the world of IoT is only expected to grow more and with it, the scope for edge computing too is expected to expand. And with specialized AI chips boasting greater processing power, storage and other advanced capabilities being added to a wider array of edge devices, edge computing is surely a field to watch out for.

Apart from the above 10 technology trends, there are some more trends that are gathering momentum and show a lot of promise in the coming year. The drone industry, for one, is only expected to grow in 2020. Be it delivering packages, agricultural sprays for crops, facilitating blood delivery in remote areas, surveillance or military and relief operations, drones are getting more popular today and are expected to be more useful in the near future. The Zipline drone, for example, is used for blood deliveries; it is loaded with the blood product at a distribution center and then launched into the air towards its destination by autopilot. Instead of landing, the drones deliver their payloads by parachute allowing for timely transportation of blood to relatively remote, inaccessible areas.

Another key trend is that of underground tunnelling. Elon Musk’s The Boring Company and Hyperloop are already making strides in this area. And with the cost of building a network of small tunnels apparently being a lot less than making a highway, underground tunnels are slated to solve distance, time and traffic problems in the future.

Democratization of expertise in the tech world is a tech trend that shows a lot of potential. What does democratization of expertise mean? It refers to offering people easy, simple access to technical or business mastery without a very intensive and expensive training. It’s where people get to easily learn and work in areas such as application development, data and analytics, design and knowledge, paving the way for citizen information researchers, citizen software engineers and much more. For instance, democratization would allow engineers to create data models without necessarily having the degree/ skills of a data scientist. They would instead rely on AI-driven development to come up with the code and automate testing.

What is an Algorithm and What are the Different Types of ... Sep 10

Top Resources for Gifted Students in the US Jul 01

What to do during COVID19 (Coronavirus) College Gap Year Jun 17