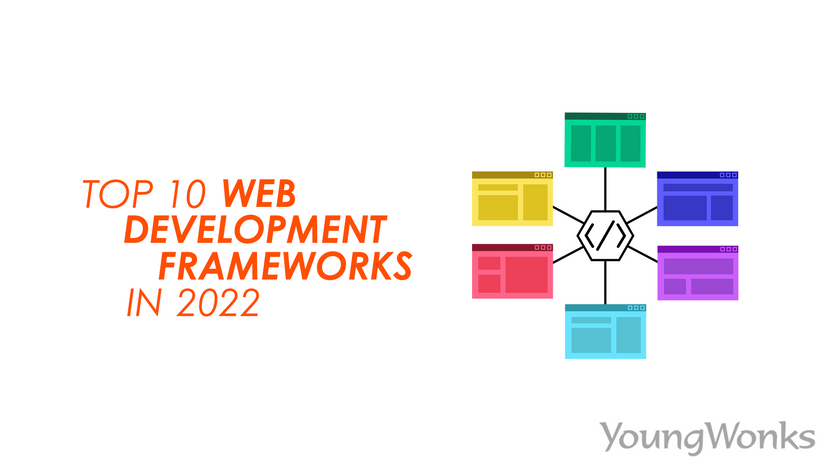 Nowhere is change as rampant as in the ever-changing world of technology. What worked 10 years ago (or even two years ago) may not work today; so it is imperative for programmers to keep themselves up-to-date with the latest in their field. This is why a good grasp of popular web development frameworks is as good as mandatory for those keen on developing a new application. Today, both beginner and experienced programmers are expected to know the latest and the best tools for application development.

What is a web development framework?

Keeping this in mind, here are the Top 10 web development frameworks for 2022 in alphabetical order:

A JavaScript framework, Angular - commonly known as Angular 2+ or Angular v2 and above - provides a completely client-side solution. A TypeScript-based open-source front-end web application framework led by the Angular Team at Google and by a community of individuals and corporations, it offers dependency injection, declarative templates, end-to-end tooling and integrated best practices to solve common development challenges on the client side.

Since it’s a JavaScript library, Angular extends HTML attributes with Directives and binds data to HTML using Expressions. Moreover, it boasts a simple yet improved design architecture, better server performance and code reusability. And with Google behind Angular, one can be assured of the increased efficiency and regular updates. Some of the known web applications powered by Angular include The Guardian, Lego and iStock Photo. For more details, visit: https://angular.io/.

Django is a Python-based free and open-source web framework that follows the model-view-template (MVT) architectural pattern. It’s aimed at creating complex, database-driven websites. The framework is worthy thanks to its stress upon reusability of components, less code, low coupling, rapid development, scalability and portability. Django also has an optional administrative create, read, update and delete interface that is generated dynamically through introspection and configured via admin models. Another advantage is that it is easy to use in that developers can quickly grasp the project’s structure. And with Django, it is easier to connect to the large number of third party applications. Some well-known sites using Django include the Public Broadcasting Service, Instagram, Mozilla and The Washington Times. For more details, visit: https://www.djangoproject.com/.

Written in the server-side scripting language PHP (PHP: Hypertext Preprocessor), CakePHP is widely used to create robust, scalable apps. The first framework of PHP, it was introduced in 2005 and is a popular choice today when it comes to building both large and small systems. Business owners prefer using CakePHP development services given how it is among the easiest to use back-end development frameworks and lets one build an app in a short period of time. Following the model–view–controller approach, it is known to create simpler, fast, and secure web apps. In fact, developers do not have to write lengthy code while making apps using this framework. Like Laravel, this framework also follows the model–view–controller (MVC) architecture. Moreover, no complicated configuration is needed here. Other advantages include easy customization, easy to learn, automatic routing, flexible and many plugins. However, it does have some cons such as the fact that it is more suited to older PHP versions and is known to be more complex than Laravel. For more details, visit: https://cakephp.org/.

Express, or Express.js, is a web application framework for Node.js, an open-source, cross-platform JavaScript run-time environment. Express has an impressive array of features that allow for the rapid development of Node based Web applications, without obscuring the features of Node. Thanks to the host of HTTP utility methods and middleware (software acting as a bridge between an operating system or database and applications on a network), it is quite flexible and building a strong Application Program Interface (API) with Express is rather quick and easy. All of which are perhaps why this minimal, fast, and unopinionated framework has many takers today. Accenture, IBM and Uber are among the many other companies that use Express, and it also works with other frameworks such as Kraken, Sails and Loopback. However, it can be rather intimidating to use for those just starting to work with the framework. For more details, visit: http://expressjs.com/.

A micro web framework written in Python, it does not need particular tools or libraries. It is simple, flexible and has no database abstraction layer, form validation, or any other components where pre-existing third-party libraries provide common functions. However, Flask supports extensions that can add application features and with this framework, you can build your own modules and projects, especially the prototyping variety. In fact, its documentation is comprehensive, full of examples and well structured. You can even try out a sample application to get an idea.

It is important to note that when compared to Django, Flask is a lot less bloated framework, so often it is a lot easier to get the job done with Flask, which is way cleaner. So if you want greater control over the components - such as the database - to be used, Flask is a good bet. A supportive community, first-class extensions, impressive API and fast templates make Flask an attractive web development framework. Pinterest and LinkedIn are some of the companies using Flask. For more details, visit: https://palletsprojects.com/p/flask/.

Introduced in the year 2006, jQuery is an open-source Javascript framework aimed at simplifying HTML and CSS and thereby simplifying front-end development. Using jQuery, one can design creative apps. One of the easiest frameworks to learn,  jQuery is compatible with almost every browser and it has many plugins, making it easier for developers to work with it. Moreover, it enjoys good community support thanks to years of being used to develop websites. Other pros of using jQuery include its ease of use, built-in UI and effects libraries, ease of adding Ajax functionality to an app, faster programming and great API documentation. Not surprisingly, many companies offering web development services prefer this language for their front-end development. Top users include Twitter, Uber, Microsoft, Pandora, Kickstarter and SurveyMonkey. But it must be pointed out that jQuery is slower than CSS, not meant for complex projects and not ideal for mobile app development. For more details, visit: https://jquery.com/.

Laravel is a free, open-source web framework written in PHP and designed for the development of web applications by using the MVC architectural pattern; it is highly popular on GitHub. It has a clean, simple API and offers support for sending notifications via email, SMS and Slack. The authentication here is simple and multiple cache configuration is possible, which makes its web applications faster. Security concerns are also at bay since it protects web applications against the serious security threats such as SQL injection, cross-site request forgery, and cross-site scripting. Simulating basic behaviour of users is also easy with Laravel, as is scheduling tasks. This makes it ideal for custom software development, and testing. It is said that more than a million websites have been made using Laravel since its release in 2011. For more details, visit: https://laravel.com/.

Also a JavaScript library or framework for building user interfaces, React is a highly popular web development framework developed and maintained by Facebook, Instagram, and a community of individual developers and corporations. It allows web developers to create large web-applications which can change over time without reloading the page.

First released in May 2013, React can be used as a base in the development of single-page or mobile applications. React’s popularity (companies such as Twitter, The New York Times, WordPress and Uber have integrated React into their production web applications) can be traced to its many advantages. For starters, it’s a free and open-source library backed by a major tech firm and a strong developer community. Moreover, there’s a straightforward learning curve when it comes to React, which means it’s fairly easy to adopt. Its lightweight DOM (Document Object Model, an application programming interface that can be used with any programming language) translates into a strong performance.  Most importantly, it allows you to create, reuse and combine components in your code. For more details, visit: https://reactjs.org/.

A beginner-friendly framework, it lets beginners get started with web development quite quickly. Plus there are numerous useful gems for RoR, which are library-like dependencies that extend the functionalities of an application and help one develop faster and more efficiently. There’s also an active RoR community that is quite reliable and friendly, and there are many tutorials, screencasts, and resources that can help you become a rails expert in no time. The main disadvantage, on the other hand, is that it takes quite some effort to deploy and run in a production environment. This has, however, not made a dent in its demand and RoR is used today by more than 826,000 live websites, including companies like Airbnb, YellowPages, Groupon, GitHub, Hulu, and Shopify. The framework is also big on test automation which is a valuable feature for software quality. For more details, visit: https://rubyonrails.org/.

A rather young web development framework, Vue.js has become quite popular in a relatively short period of time. Small in size, it offers Reactive two-way data binding like Angular, in addition to supporting Virtual DOM and Event Sourcing like React. If you wish to design a flexible, interactive stable web application Vuejs is a great choice. A big advantage is the fact that it is a progressive framework. This means that if you have an existing project, you can adopt Vue for one part of the project, and everything would work just fine. With a rather simple structure, it’s also easy to solve issues with this open-source JavaScript framework. Plus it boasts good documentation. All of the above mean that Vue is a good bet for developers looking to create entire frontend applications. This is perhaps also why it has done rather well, despite not enjoying support from big companies such as Facebook or Google. Vue.js’s popularity is seen mainly in Asia, particularly in China, where it is the most used JavaScript-based web-framework, making it one of the most popular client-side frameworks. In GitHub, it is the most starred Web framework. For more details, visit: https://vuejs.org/.

Apart from the above 10 web development frameworks, there are some others too that deserve a mention. Take for instance, Ember (https://emberjs.com/). A highly trusted, mature and open-source Javascript web development framework, Ember was released in 2011 and since then it has seen rapid growth and gone on to become much sought after in the world of professional web development. Its popularity stems from its features such as its strict organization, advanced version management system, and ability to support both modern standards and older technologies at the same time. Ember lets one build scalable single-page web applications by incorporating common idioms and best practices into the framework. This web application development framework is great for producing complex web apps, particularly thanks to its two-way data binding, and is used by companies like Google, Microsoft, Netflix and Heroku, among many others.

Similarly, there’s Spring (https://spring.io/). Based on Java, Spring is a web application framework that’s very popular in the world of backend web development. Mainly used to build Java 2 Platform, Enterprise Edition (J2EE) apps, Spring has many advantages. For one, it offers developers a frame for their future application. This along with strict architecture helps  simplify the app-building process. It is also known for its approach of weakened dependencies between objects, and the fact that it doesn’t need to connect objects manually. Moreover, this Model-View-Controller framework has many sister projects that speed up its performance and let one scale one’s business rather quickly. The downside is that since this is a tough framework to work with if one doesn’t know Java. Companies using Spring include Wix, TicketMaster and Billguard.