What is Augmented Reality?

What is Augmented Reality (AR), how is it different from Virtual Reality (VR) and what are its different applications today?

Our blog takes a look at what AR stands for, its applications and threats 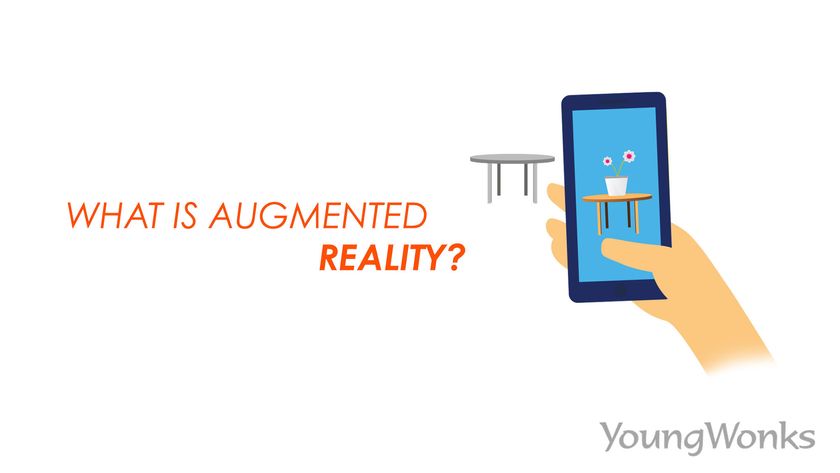 ​​What is Augmented Reality? We talked about Virtual Reality (VR) in our previous blog post (https://www.youngwonks.com/blog/What-is-Virtual-Reality). In this one, we shall focus on Augmented Reality which is not only closely related to VR, but is also gaining momentum in the new post-COVID19 tech landscape of today. In fact, Augmented Reality experiences are rather common today thanks to social media apps on mobile phones (for example, Snapchat) offering AR-driven filters and video games, led by the likes of Pokémon Go.

What is Augmented Reality (AR)?

Augmented reality (AR) is essentially an interactive experience of a real-world environment where the objects in the real life are improved upon using computer-generated perceptual information; such an improvement using overlaying may be carried out across multiple sensory faculties, be it visual, auditory, haptic, somatosensory or olfactory.

To put it simply, Augmented Reality is the technology used to enhance the real world with the use / infusion of digital elements. These elements could be computer-generated graphics, sound or video effects, haptic feedback, or sensory projects. The resulting experience for the viewer is very engaging and dynamic and is made possible thanks to inputs received from hardware devices such as smart glass, smart lenses, and mobile devices.

The term Augmented Reality can be traced back to 1990 when Boeing researcher Tom Codell called it so. Since then the use of AR has been on the upswing; after being initially used for commercial purposes by the television industry and the military, today it is used in everyday life in several more areas such as video games, social media apps, shopping, enterprise solutions, automotive industry and even Artificial Intelligence.

How does Augmented Reality work?

When one uses a device or application that is AR-enabled, the hardware of the device or application clicks an image of the object and shares it with the computer vision program which then processes it and in doing so, collates all relevant information; say for example, the object measurements, its surroundings in terms of other objects on the same surface and in terms of the distance of other objects from the main one in focus. After applying these insights, the AR-enabled device comes up with virtual information that is superimposed over the real object, giving the AR device user a unique experience.

As mentioned above, there are many AR applications today. Let’s look at the leading use cases below.

a) AR for gaming

Today, it is difficult to not think of VR and AR at the mention of the gaming industry. And even as head-worn systems become more affordable and computing power gets more portable, there is a greater demand for AR than ever as it offers a lot of potential in terms of enhancing the gaming experience. The popular game of Pokémon Go is perhaps the best example of an AR game. In the game, players have to locate and capture Pokémon characters popping up in the real world - it could be on a sidewalk, in a park, by the fountain, or even in your own living room. There are many such popular Android and iOS AR apps today, including Ingress, SpecTrek, Temple Treasure Hunt, Ghost Snap AR, Zombies, Run! and AR Invaders.

b) AR for medicine / healthcare

Here, AR is used by medical students to assist them in practising surgery in a controlled environment. In fact, surgeons can enhance their sensory perception using AR during operations. Along with an MRI or X-ray, Augmented Reality can offer within a single view a comprehensive patient status to the surgeon. This is said to be particularly useful in neurosurgery as AR allows a 3D image to show the exact coordinates of the brain on top of the real anatomy of the patient. Moreover, visualizations created with AR help greatly as they demonstrate complex medical conditions to patients.

A key application of Augmented Reality is for the military’s Heads-Up Display (HUD). Here, a transparent display positioned directly in the view of the fighter pilot showcases data about the horizon line, airspeed, and altitude along with other relevant figures. Heads up here refers to the pilot not having to look down at the aircraft instrumentation to get the information needed. Another application would be the Head-Mounted Display (HMD); this is used by ground troops as it shows them the location of the enemy. Additionally, AR is also used for training the troops.

AR navigation makes it possible to add relevant tips on the screen when one hovers the navigational device’s camera over real-world objects. These tips could be info about building locations, bus routes, restaurant suggestions in the area etc. Advanced GPS systems too use AR to facilitate flawless navigation from Point A to Point B. With the smartphone camera and the GPS, the user can see the selected route in front of the car.

Plus, AR has been extensively used in the automotive industry. One of the main applications is the use of AR HUDs (head-up displays), the latest addition in the driver assistance systems. With the HUD projecting real-time data like warning signals, speed, navigation, etc. directly on the screen, drivers get to focus on the roads, making the driving experience safer. Leading users of AR in the automotive industry are Volvo, BMW, and Lexus.

With the use of AR, interactive elements are being introduced by hotels and resorts to provide users with enhanced experiences where the latter get easy access to any relevant info they may need. For example, resorts are making AR compatible through the wall maps placed in their rooms. When seen with a smartphone or tablet, the wall maps share additional information about local places of interest, activities to do, cuisine to try out, etc. Hospitality companies too are collaborating with hotels to give tourists a more holistic experience where all a user has to do is point their phone at a location and get info about its products and services.

f) AR for maintenance and repair

Since AR enables users to improve their field of view with real-time superimposed digital data, users can easily get access to data relating to a device or even get step-by-step instructions on getting it repaired. In fact, simulations powered by AR can be used to prepare technicians in advance, thus cutting down on training costs, human errors and overall duration of the execution.

You wish to buy a pair of glasses online but are not sure if they will suit you. So what do you do? Earlier, one would choose to not buy them online due to these sizing, fit and look issues and instead purchase them in a physical store after actually trying them on. But now with companies selling eyewear using AR on their websites / apps, one can try on any design on one's face and check out the look - all online. Similarly, many retail companies - especially in makeup, fashion, lifestyle and decor (think Ikea) - are increasingly adopting AR technology so users can check out their offerings online without the need to visit a physical environment.  In fact, they are also using technologies offering VR, facial recognition, adapting to local lighting conditions and providing virtual assistants and personalized advice.

Smart glasses are among the top developments in the AR space. Used by enterprises, it will be a few years before they end up being used as consumer solutions. Microsoft's HoloLens 2, which was announced in February 2019, is a good example. With more enterprises using AR, the space is expected to witness improvements in prototyping, testing, quality control and troubleshooting.

Differences between VR and AR

If we had to break it down, here would be the main differences between AR and VR:

1. AR has a real-world setting but VR is a completely virtual world.

2. AR users can control their presence in the real world; VR users are system-controlled.

3. AR can be accessed with a smartphone and / or with AR headsets, but VR definitely needs headset device.

4. VR only enhances a fictional reality as opposed to AR that enhances both the virtual and real worlds.

Is all well with the increasing use of AR? Or does it come with its own set of challenges. Unfortunately, the latter holds true. Below we look at some of the major challenges posed by AR today.

With the rise and spread of social media and the Internet, creating and sharing of data is at an all-time high. Smartphones have only boosted this further and as a result, the public is able to easily access extensive amounts of data from varied sources. So now with AR and AR-enabled wearable devices such as AR smart glasses, we are effectively staring at a situation that can be best described as data overload. This can be quite addictive and cause people to stray from their usual routine.

Newbies and those getting newly acquainted with the AR technology are likely to find it confusing or distracting. And when it comes to activities like driving or surgeries, AR can be a double-edged sword as it can be very distracting and thus, extremely dangerous. It is therefore extremely important for organizations to train their users to offer smooth transitions from non-AR to AR-enabled activities.

AR experiences entail taking in the present real world environment, processing it and then enhancing it with extra digital information.  This means that a large amount of data is collected - not just the data of the device’s user but also that of any other people being viewed through the device. This can in turn threaten their personal privacy.

AR too is vulnerable to cybersecurity dangers and unapproved access through hacker attacks and malware. Such attacks can interfere with the provision of service or lead to overlays of wrong data, creating extreme and dire results. For instance, a hacker can share misinformation to a driver following an AR-controlled route framework leading to mishaps.

As seen above, the world of AR holds a lot of promise and leading tech companies like Google, Amazon and Facebook are already using it extensively.  But at the same time, it is important to address the concerns associated with its rise, for leaving them unchecked can also create many problems in the future.