What is Ham Radio and How Does It Work

This blog takes a close look at the phenomenon called amateur radio and how one can obtain a ham radio license and kit... 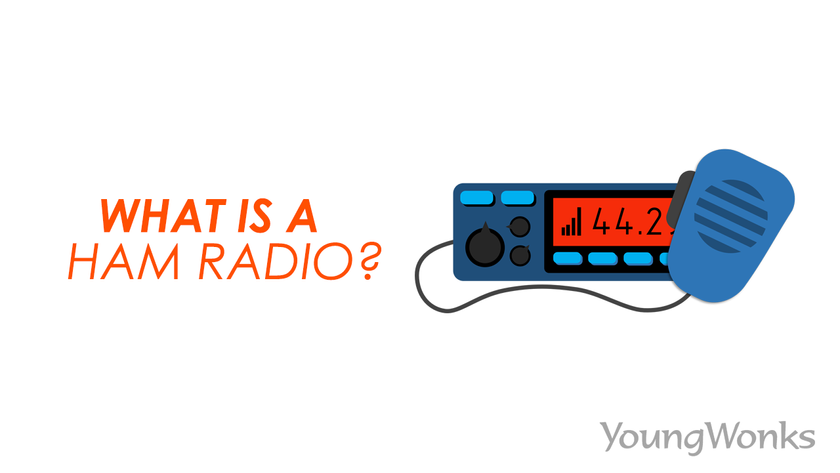 What is amateur radio? Indeed, at a time when radio may not quite have as many takers as it once did, one would imagine that this is a question only a few would know the answer to. But then again amateur radio, also known as ham radio, is actually quite popular among radio enthusiasts. This blog takes a look at the phenomenon that is amateur radio, how it came about and how it continues to fascinate radio lovers.

What is Ham Radio/ Amateur Radio?

Amateur radio, also known as ham radio, is the use of radio frequency spectrum for non-commercial exchange of messages, wireless experimentation, self-training, private recreation, radiosport, contesting and emergency communication. The term amateur is used to describe someone who has authorisation and interest in the radioelectric practice but with only a personal aim and no monetary rewards (either direct or indirect) in mind; such a person is different from those involved in commercial broadcasting, public safety (think police and fire), or professional two-way radio services (read maritime, aviation, taxis, etc.). In simpler words, ham or amateur radio is a popular hobby and service that brings people, electronics and communication together. People use it to talk across town, around the world, or even into space, all without the Internet or cell phones. It’s fun, social, educational, and can be of great help in times of need.

What does ham radio for? The history of amateur radio goes back to the 19th century, when the word ham was a pejorative term used in professional wired telegraphy, mainly to mock operators who had poor Morse code sending skills, aka the ham-fisted ones. This term continued to be used after the invention of radio and the popularity of amateur experimentation with wireless telegraphy; even among land- and sea-based professional radio operators, ham amateurs were considered a nuisance. But the 20th century saw the amateur radio community rebrand the word and by the mid-20th century, it had lost its pejorative meaning.

Back in 1909, the First Annual Official Wireless Blue Book of the Wireless Association of America published a list of wireless telegraph stations in Canada and the United States, including 89 amateur radio stations. Much like with radio in general, amateur radio was associated with amateur experimenters and hobbyists. Amateur radio enthusiasts have significantly contributed to science, engineering, industry and social services.

How Does Ham Radio Work?

Typically, amateur radio operators - and they can be doctors, students, kids, politicians, truck drivers, movie stars, missionaries and what you - share a basic knowledge of radio technology and operating principles, and pass an examination for a license issued by the Federal Communications Commission (FCC). The license allows ham radio operators to operate on radio frequencies allocated by the FCC for use; these frequencies are also known as the “Amateur Bands.” Be it through Morse Code on an old brass telegraph key, voice communication on a hand-held radio or computerized messages transmitted via satellite, all hams use radio to reach out to the world.

Hams can operate from just above the AM broadcast band to the microwave region, in the gigahertz range. Many ham bands are found in the frequency range that goes from above the AM radio band (1.6 MHz) to just above the citizens band (27 MHz). During daylight, 15 to 27 MHz is said to be a good band for long-distance communications. At night, the ideal band for is 1.6 to 15 MHz. These bands are often referred to historically as short-wave bands (representing short-wave radio). Unlike frequencies used by FM radio stations and TV stations, which are line-of-sight and therefore limited to 40 or 50 miles, short-waves bounce off the ionosphere from the transmitter to the receiver’s antenna. The higher the frequency is, the shorter the wavelength. Some ham radio operators use the very dependable Morse code, while others rely on voice. Morse code signals (beeps) often get through when voice transmissions cannot.

While ham radios do broadcast in all directions, amateur radio enthusiasts usually do not use their radios like a disk jockey would at a radio station. In normal AM or FM radio, one disk jockey transmits and thousands of people listen. Hams, meanwhile, carry out two-way conversations, often with another ham or with a group of hams in an informal roundtable. These other hams could be in the same town, county, state, country or continent or may consist of a mix of countries, depending on the frequency and the time of the day. Hams also take part in networks, often called nets, at predetermined times and frequencies to exchange third-party messages. Some hams use radioteletype (RTTY) with computer screens replacing the noisy teletype machines of the past.

Many hams begin on VHF FM, using battery-operated hand-held transceivers to transmit on one frequency and receive on another frequency. They use FM repeaters, set up and supported by local radio clubs. These repeaters borrow antenna space from TV-station-tower owners on top of mountains and high buildings to receive and re-broadcast signals to extend the range.

The FM repeater receives one signal at a time and simultaneously rebroadcasts it on another frequency using many more watts of power than available from a small hand-held radio. This extends the range of the hand-held radio from a few miles to tens or hundreds of miles. When a ham is traveling, he or she can find a repeater to use, and have a good, static-free, FM-radio-quality conversation via a radio that is small enough to fit comfortably in one’s pocket or purse. Linked repeaters make possible fun wireless communications across an entire state with a hand-held radio. Repeaters use common transmit and receive frequency pairs. The frequency pairs in use are informally assigned by groups of hams in such a way that one frequency pair in use is far enough from another repeater thus avoiding unwanted interference.

Using ham radio, one can communicate from one’s home, behind the wheel of a car or even from the top of a mountain and that too without using the Internet or a cell phone network. Especially during a disaster or calamity, when usual communications channels fail to function, amateur radio operators can chip in by aiding emergency communications efforts and working with public service agencies. For instance, the Amateur Radio Service helped New York City agencies communicate with each other after their command center was destroyed during the 9/11 tragedy. Ham radio also came to the rescue during Hurricane Katrina and the devastating floods in Colorado in 2013.

And of course, one can interact with other hams using one’s voice and a microphone, interface a radio with one’s computer or tablet to send data, text or images, or Morse code, which continues to be in demand. In fact, ham radio can even connect one to astronauts aboard the International Space Station, to other hams through one of several satellites in space, or bounce signals off the moon and back to Earth.

Ham radio enthusiasts also prefer making and experimenting with electronics. Computer hobbyists enjoy using Amateur Radio’s digital communications opportunities. Others take part in “DX contests”, where the goal is to see how many hams in distant locations can be contacted.

How to Get Started with a Ham Radio?

To start with, one needs to get an amateur radio license from the FCC. Any person, except for a representative of a foreign government, regardless of citizenship who wishes to apply for a US amateur radio license has to appear before Volunteer Examiners (VEs); anyone who qualifies by examination is eligible to apply for an operator/primary station license grant. VEs are licensed radio amateurs who conduct examination sessions, often through permanently established teams on a monthly or quarterly basis.

Licenses are valid for 10 years from the date of issuance or renewal and they can be renewed online. The entry-level license, known as Technician Class, is given out after the applicant successfully completes a 35-question multiple choice written examination. The license awards full operating privileges on all amateur bands above 30 MHz and limited privileges in portions of the high frequency (HF; 3 to 30 MHz) bands. The next level, known as General Class, needs one to pass the Technician test and a 35-question multiple-choice General exam. General class licensees get privileges on portions of all amateur bands, and have access to over 83% of all amateur HF bandwidth. The top US license class is Amateur Extra Class. This license needs applicants to pass both the above tests and a 50-question multiple-choice theory exam. Those with Amateur Extra licenses are granted all privileges on all US amateur bands.

After that one can look at what kind of equipment one plans to use and what type of communication he/ she’d wish to try. Keep in mind that one’s first radio needn’t be new. There are many older transceivers that work quite well. These transceivers (“rigs,” as hams call them) are often available online on auction sites such as eBay.

It is said that HF transceivers with 100 watts of output and a built-in antenna tuner are a good option for beginners. Of course, HF radios with VHF and even Ultra High Frequency (UHF; 300 Mhz to 3 gigahertz/ GHz) coverage can also be purchased at a higher cost. If the radio can’t operate directly from AC power, one will require external DC power supply. A multi-band dipole makes for a brilliant option as it is a good, inexpensive antenna, connected to the radio through coaxial cable or open-wire feed line, although such a line will need an external antenna tuner to function. To try Morse code, one can add a straight key or paddle (most radios come with a built-in keyer). To run the radio with digital modes, one has to add a sound card data interface with cables connected to the radio.

One can seek some more handy advice by joining the American Radio Relay League (ARRL, www.arrl.org), which is the largest membership association of amateur radio enthusiasts in the US and is known to offer good technical support.

The International Telecommunication Union (ITU), a special United Nations (UN) agency focusing on matters related to information and communication technologies, has established the amateur radio service through the Radio Regulations. It is important to note that national governments control technical and operational characteristics of transmissions and give out licenses to individual stations with an identifying call sign. Prospective amateur operators need to undergo tests of their understanding of key concepts in electronics and radio rules laid down by the host government. Radio amateurs carry out communication across cities, countries and even continents, by using a range of voice, text, image, and data communications modes and having access to frequency allocations throughout the radio frequency spectrum. In several countries, amateur radio operators also send, receive, or relay radio communications between computers or transceivers linked to secure virtual private networks on the Internet.

Amateur radio is officially represented and coordinated by the International Amateur Radio Union (IARU), which is organized in three regions and has national amateur radio societies from different countries as its members. According to a 2011 estimate shared by ARRL, there are over 600,000 radio amateurs in the United States and around two million people self-proclaimed amateur radio lovers across the world.

Not surprisingly, an overwhelming 830,000 amateur radio stations are situated in the IARU Region 2 (the Americas) followed by IARU Region 3 (South and East Asia and the Pacific Ocean) which has around 750,000 stations. A relatively smaller number - about 400,000  - are based out of IARU Region 1 (Europe, Middle East, Africa).