What is Python and Why is it so Popular?

What is Python and why is it in great demand today?

Our latest blog takes a look at Python and what makes it so popular among Big Tech and in promising fields such as data sciences, ML, AI and more 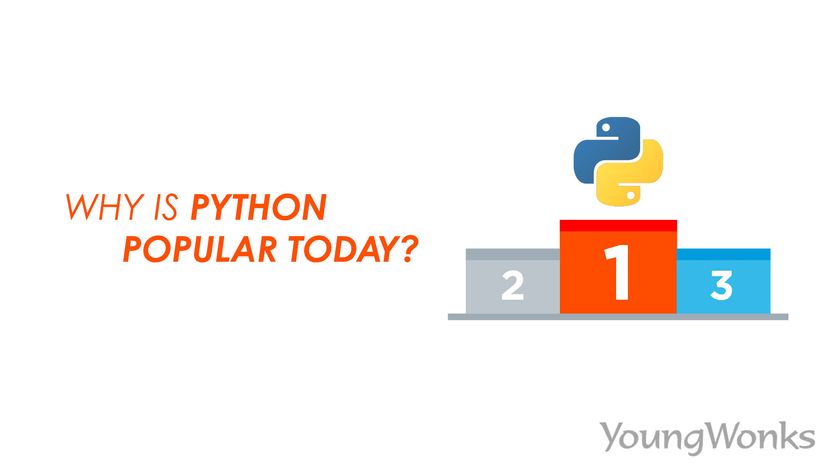 What is Python and why is it so popular? This is a commonly Googled question today, even as more people turn to software programming / software development as a career option.  There are many coding languages available today. But Python leads the pack. What is the reason behind the increasing demand for programmers proficient in Python? We shall look at this and more in our latest blog post.

To begin with, let’s look at the coding language Python.

What is Python? An Introduction to Python

An interpreted high-level general-purpose language, Python focuses on code readability with its use of significant indentation. Dynamically-typed and garbage-collected, it supports multiple programming paradigms, including structured (particularly, procedural), object-oriented and functional programming.

Dutch programmer Guido van Rossum started working on creating Python programming language back in the late 1980s and the language was first released in 1991 as Python 0.9.0. Since then many versions of it have been released. Python 2.0 was released in 2000 with new features, including list comprehensions and a garbage collection system using reference counting. 2008 saw the release of Python 3.0, a major revision of the language. Python 2 was discontinued with version 2.7.18 in 2020.

In the three decades that it has been around, Python has done remarkably well and is among the fastest growing coding languages. Today it is used in web development, development of web applications, AI, machine learning, operating systems, mobile application development, data analytics, data visualization and video games. What has led to Python dominating the list of popular programming languages? A host of reasons have contributed towards this. We look at them in detail in the section below.

Why is Python So Popular?

Ease of learning and use

With a visually uncluttered formatting and using English keywords where other languages use punctuation, Python has been designed to be an easily readable language. Here curly brackets are not used to delimit blocks, and even semicolons after statements are hardly used. Plus, it has a lot fewer exceptions in its syntax and not many special cases when compared to C or Pascal. All of this makes Python a very easy language to use and learning Python is easy too. Indeed, Python code can be written rather easily and executed much faster than other coding languages, thus making it the ideal choice for coding beginners and newcomers. And since it is an interpreted language, it also helps that one can quickly change its code base, in turn adding to the popularity of Python among developers.

With corporates favoring it and a big supportive community to boot, Python now also boasts a variety of rich (and often open source) libraries that developers can make use of, especially in the initial stages of development. Many of these Python libraries have specific use cases: for instance, Matplotlib is used for plotting charts and graphs; SciPy for engineering applications, science, and math; BeautifulSoup for HTML parsing and XML; NumPy for scientific computing, Django for server-side web development, NLTK (Natural Language Tool Kit) for Natural Language Processing (NLP) and Scikit-learn for machine learning applications. Moreover, there’s no dearth of cloud media services providing cross-platform support through library-like tools.

Enjoying the support of a strong community is a key factor and Python scores highly on this front. As a matter of fact, there is a plethora of documentation, guides and video tutorials that can be easily accessed by those working with the Python language. Python developers of varying skill levels can actually enjoy the support needed to get better at this language, again making it a popular starting point among new coders. It’s quite common for students to get introduced to computer science through Python, which is also used for in-depth research projects. Thanks to the advanced and active Python community, all issues can typically be dealt with in a short period, making sure overall project development is not hampered.

Python has built a reputation for being efficient, reliable, and much faster than most modern languages. Today, it can be used in almost any kind of environment and that is invariably a big advantage it enjoys. So the developer may be working on a mobile application, a desktop application, developing a website or programming the hardware and Python would be a good coding language for the project.

Python lends itself well to experimentation and this is mainly so because it is very flexible. Anyone proficient in Python language can actually step outside their comfort zone to try and build something new with it. Such  flexibility and freedom is not really afforded by other programming languages.

When a big tech company supports a programming language, it is bound to grow faster. You’ll see these in scores of instances today; be it PHP which is supported by Facebook, Sun, Visual Basic & C# by Microsoft and Java by Oracle. Similarly, Python too enjoys the support of big tech: several big companies, in fact. Google, Facebook and Amazon Web Services are the leading names to back the coding language and use it extensively in their projects. For instance, Google has been working with Python since 2006 and it continues to use the programming language for its many applications and platforms. In addition to this, Google has also expended a lot of time, effort and money towards the training and success of Python; to the extent that it also has a portal meant only for Python. As a result, the list of support tools and documentation has been growing at a rapid pace, making Python more easy to use for developers.

Usefulness and popularity in areas of Big Data, Machine Learning and Cloud Computing

Today, after R, Python is the most popular coding language in data sciences (including data analysis); the language is also extensively used in research and development. Organizations working in new and promising areas - such as Big Data, Machine Learning (ML)/ Artificial Intelligence (AI), deep learning and cloud computing - typically use Python in order to transform and improve their processes and workflows.

Armed with its tools, modules and libraries, Python also offers greater convenience to developers working in automation. They typically end up typing just a few lines of code (and in a short period of time) in order to carry out automation of tasks, including the automation of software testing.

As the reasons shared above indicate, Python is seeing great demand in different fields today and now it is more often than not the preferred programming language for several programmers and students. In fact, Python forms a key section in data science courses today. Knowing Python is a huge plus in a programmer’s CV and it opens up a lot of avenues for such candidates.

Use of Python in schools and colleges

Given the fact that Python offers a lot of scope in terms of job opportunities, it is not surprising to see that colleges, schools and afterschool classes are focusing on teaching students this coding language. Those who learn Python in school or afterschool classes stand to gain more when they go to college and pursue computer science.

Thanks to the above reasons, Python is more popular today than ever and not just among grownups but also among kids looking to learn coding. And while there is no dearth of free learning resources today, coding classes surely offer greater accountability. At YoungWonks, we give our students individual attention in 1:1 live lessons, encouraging them to explore their creativity by experimenting and making new programs, apps, websites, games, robots and electronic devices. Our students have even won first prizes at the RoboRave International 2018, RoboRave California 2018 and RoboRave US National 2017.