What is Rust and Why is it Popular?

Why is the Rust programming language so much in demand and where is it used?

A look at the programming language Rust, its many advantages and the key areas where it is used today 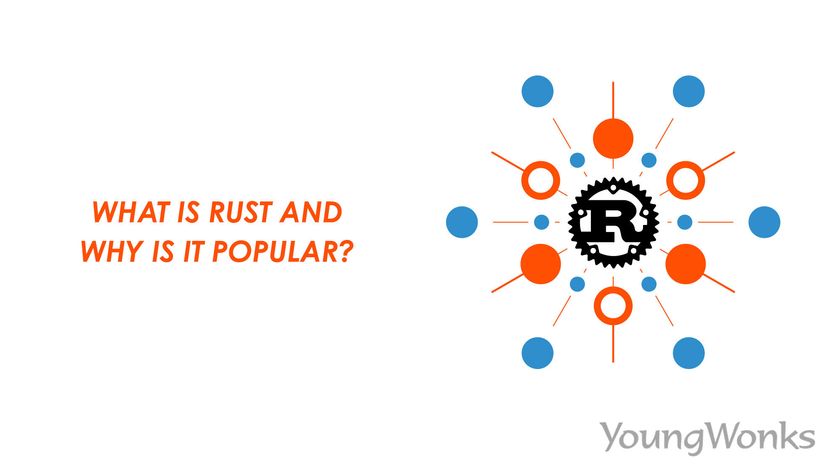 What is Rust and why is it in demand these days? This is a question you may have come across if you are a recent entrant to the world of programming. And while Python and Java continue to be the most in-demand programming languages today, Rust is another coding language that's growing fast in popularity. In this blog, we shall answer both the queries posed. Let’s start by talking about Rust, the programming language.

An introduction to Rust

Created by Graydon Hoare at Mozilla Research with contributions from others, Rust is a well-known programming language today. Hoare and others actually refined the language as they wrote the Servo layout or browser engine, and the Rust compiler. It is a statically typed, multi-paradigm, high-level, general-purpose programming language that has been created to ensure greater performance and safety, and it delivers well on both speed and efficiency fronts. Syntactically similar to C++, Rust programming language offers memory safety but without garbage collection.

It is important to bear in mind that Rust comes with zero-cost abstractions, generics and functional features, which in turn solves most problems faced by developers working with other low-level languages (think memory errors and building concurrent programs). As a result, Rust has been used to develop many websites and products such as 1Password, Figma, NPM, Coursera, Mozilla, Atlassian, Dropbox, and more. Moreover, the fact that Microsoft has been experimenting with Rust for secure and safety-critical software components has also boosted its brand. In fact, Rust has been voted as the most loved programming language in the Stack Overflow Developer Survey every year since 2016.

In systems programming, memory errors is an area that takes up a lot of time and effort. So for these developers, the main goal is to have a project that boasts quality code management, readability, and quality performance at runtime.

This is where Rust comes in. With Rust, engineers can limit code optimizations and memory overhead, which then leads to good performance at runtime. What’s more, Rust helps them achieve this with zero-cost abstractions. This means that one does not have to pay for features one doesn’t use. Undoubtedly, this is hugely useful to developers in keeping costs low.

So with zero-cost abstractions, compile time memory checks, and garbage collections, Rust tracks the lifetime of code at compile time even though it doesn’t check and collect memory at runtime. So regardless of whether you use loops or closures, it will be compiled down to the same assembly.

Concurrency is a feature in programming where multiple copies of the same program are run at the same time and at the time of execution, these copies of the program communicate with each other.

Easily one of the most unique offerings of Rust is the ownership; it facilitates memory safety without garbage collection. Now it is important to note here that low-level programming languages have two types of memory: stack and heap. While stack is a type of memory used for assigning dynamic memory that’s known memory (like integers and strings), heap is used for memory that can be changed in the future. Now in such scenarios, developers typically account for spaces for items in a heap and then sign them onto a space in a stack. But this can also lead to sometimes two variables being assigned to the same data on a heap. With Rust, this is avoided since it allows only one variable to own a piece of data. When the data is assigned to another variable, it’s either moved or copied, which means Rust allows for efficient memory usage.

To add to this, Rust lets developers finetune customizations and implementations by adding the word unsafe.

Rust is not exactly easy to learn; it comes with a rather steep learning curve which makes it not really ideal for beginners. And yet, a lot of developers have made the effort to learn it since it boasts impressively thorough documentation.

In fact, many intermediate developers who took the StackOverflow survey  shared that Rust’s documentation has been tremendously helpful in learning the programming language.

All of the above factors have contributed to Rust’s popularity and this has led to the emergence of a fairly thriving community of users. Given that it was created back in 2010 and was received well by many developers and firms, the Rust community (including on GitHub and subreddits) has now grown with its numerous users, experts, and enthusiasts, making it easy for rookies to try it out and solve problems with Rust.

Today, Rust has a community page with links to Discord channels and a forum as well. Thus there is a strong sense of community among developers in the Rust ecosystem.

Ideal use cases for Rust

So which are the scenarios where Rust would be a great fit? To begin with, Rust is of great use when it comes to containing certain types of bugs during compilation thanks to its safety features. And as mentioned above, it’s also a good bet for applications where performance matters and a large amount of data needs to be processed.

Below are the key areas where Rust-lang is ideal:

Today, programmers use Rust to make a number of blockchain applications, since it can deal with several requests within a network with very little or nil computing load. For instance, it has been used to make blockchain systems such as Polkadot, a blockchain network for handling tasks, and Parity.io, an alternative network for Ethereum.

Mozilla is sponsoring several open-source projects with Rust. Microsoft is also using Rust to redesign some of its components so as to get the optimal performance from them.

A Unix-like Operating System on a microkernel design, Redox has been written in Rust, so as to capitalise on the innovations of the latter. Also deserving a mention is FireCracker, an open-source virtualization tool used for creating secure containers and VMs for serverless services. Interestingly, Rust is also gaining followers in the Linux OS community. For instance, at the 2020 Linux Plumbers Conference, developers seriously considered using Rust for new Linux inline code.

Rust has been used for many web development projects, and tools. For instance, there’s Rocket, a web framework for Rust that makes it simple to write fast, secure web applications without compromising on flexibility, usability, or type safety. Also written in Rust is the flexible web framework Gotham, which promotes stability, safety, security and speed and not surprisingly, has been used for production level web projects like Dropbox and Coursera.

Because of its speed, safety, and cross-platform support, Rust is often the preferred language for making command line applications and tools.

Watch the following video to get started with Rust in 20 minutes: