What is Wireless Charging and How It Works

What does wireless charging mean, how does it happen, its uses and what the future holds...

An introduction to wireless charging, how it works and its applications today 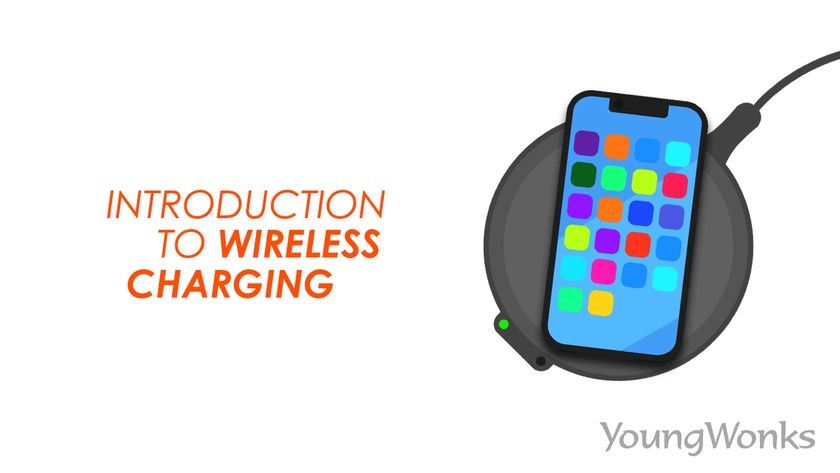 What is wireless charging?

Initially, scientists sought to transfer power using radio waves as a medium; radio waves were first predicted in 1864 by James C. Maxwell. Nikola Tesla too believed that wireless power transfer was possible and probable. However, his Tesla Tower experiment didn’t work because of power diffusion in different directions. In the 1960s, research focused on using microwaves for power transmission.

In 1972, the University of Auckland’s Professor Don Otto worked on building a vehicle powered by induction using transmitters in the road and a receiver on the vehicle. But it was in 1977 that John E. Trombly got a patent for an electromagnetically coupled battery charger. The patent basically describes an application to charge headlamp batteries for miners. However, it was the trio of J.G. Bolger, F.A. Kirsten, and S. Ng who are credited as the names behind the first application of inductive charging used in the US, back in 1978. They built an electric vehicle powered with a system at 180 Hz with 20 kW.

This was followed up with the making of a bus powered by inductive charging in California, and around the same time - in the ‘80s, that is - similar work was being done in France and Germany.  In 2006, MIT started using resonant coupling, where scientists could transmit a large amount of power over a few meters without radiation. This paved the way for inductive charging on a commercial basis.

Qi standard: Developed by the Wireless Power Consortium, Qi is an open interface standard where wireless power is transferred using inductive charging over distances of up to 4 cm (1.6 inches). The system uses a charging pad and a compatible device, which is placed on top of the pad and the charging takes place via resonant inductive coupling.  Initially released in 2008, the Qi standard has been incorporated into more than 140 smartphones, tablets and other devices. Mobile manufacturers making devices compatible with this standard include Apple, Asus, Google, HTC, Huawei, LG Electronics, Motorola Mobility, Nokia, Samsung, BlackBerry, Xiaomi, and Sony.

PMA standard: Founded by Procter & Gamble and Powermat Technologies in 2012 so as to advance a suite of standards and protocols for wireless power transfer, Power Matters Alliance (PMA) was a global, not-for-profit, industry organization that got merged with Alliance for Wireless Power (A4WP) in 2015 to form AirFuel Alliance. The goal of this body was to network with technology companies to guarantee consumers interoperable devices that make use of wireless power technology. Denoted by the electron "P", PMA interface standard described analog power transfer (inductive and resonant), digital transceiver communication, cloud based power management, and environmental sustainability. PMA draws members from companies across a wide spectrum spanning the mobile device ecosystem and thus includes handset providers, service providers, chipset suppliers, manufacturers, test labs and public establishments.

How does wireless charging work?

Wireless or inductive charging works on the same principle as induction cooktops, i.e. using electromagnetic induction, which generates a voltage across a conductor placed in a changing magnetic field or a conductor moving through a stationary magnetic field.

An induction charger typically comprises two primary induction coils. One is encased in the charging base or the mat; it is the component that produces an alternating current (AC) from within the base. The other is located in the portable device in need of a charge, say a smartphone, tablet etc. The coil could be in the form of a pad that clips to your phone, a circuit embedded inside the phone, or a replacement battery cover with a built-in charging coil that gets connected to the charging socket. Together, these two coils form an electrical transformer.

In case of a mobile being charged wirelessly, this is what happens: when the power supply to the charging base/plate is switched on, AC flows through it and creates an electromagnetic field (a changing magnetic field) around the primary coil. With the secondary coil or the receiver coil (that is housed in the smartphone) comes in contact with the former, an electric current is generated within the coil. The AC flowing through the coil in the smartphone is converted into DC (Direct Current) by the receiver circuit. The DC generated in this way is used to charge the battery of the smartphone.

Applications of wireless charging can be classified into two categories: low power and high power. While low power applications usually work for small consumer electronic devices like cell phones, handheld devices, some computers, and similar devices which charge at power levels below 100 watts, high power wireless charging typically refers to inductive charging of batteries at power levels above 1 kilowatt. The biggest application area would be charging electric vehicles, where inductive charging makes for an efficient, cordless and automated option to plug-in charging. Power levels of these devices vary between 1 kilowatt to 300 kilowatts or higher. Such high power inductive charging systems generally make use of resonated primary and secondary coils.

In terms of examples of devices using wireless charging, there is a wide variety out there today, starting from Oral-B rechargeable toothbrushes by the Braun company (that have used inductive charging since the early 1990s) right up to mobile phones by Nokia, Samsung, Apple and Google and of course, electric vehicles.

A majority of smartphone manufacturers such as Apple and Samsung have adopted adopted the Qi wireless charging standard. Samsung and other companies have begun toying with the idea of "surface charging", which is where an inductive charging station is built into an entire surface such as a desk or table. On the other hand, companies such as Apple are opting for dock-based charging platforms; which includes charging pads and disks that have a much smaller footprint.

Like most technologies, wireless charging comes with its host of advantages and disadvantages. Here we take a look at both.

a. For starters, wireless charging typically means protected connections, since there is no corrosion when the electronics are enclosed and thus away from water or oxygen. There’s also lower risk of electrical faults such as short circuit due to insulation failure, especially when connections are made or broken frequently.

b. Wireless charging adds to a device’s durability as there is no need to keep plugging and unplugging the device and thus much less wear and tear on the socket of the device and the attached cable.

c. This technology helps minimize infection risks. So in an embedded medical device, power is transmitted through a magnetic field passing through the skin, thereby avoiding infection risks that come with wires penetrating the skin.

f. With no dependence on people to plug or unplug a device thanks to automatic wireless charging, there’s higher reliability.

a. Such devices take 15 percent longer to charge even when the power supply is the same; this slow charging is caused by lower efficiency.

b. Wireless charging requires drive electronics and coils in both device and charger, thus adding to the complexity and the manufacturing costs.

c. When a mobile device is connected to a cable, it can be moved around (although within a certain range) and used even as it gets charged. But with most implementations of inductive charging, the mobile device has to be left on a pad to charge, and thus can't be moved around or easily operated on while charging. In case of some standards, charging can be done at a distance, but only when there is nothing in between the transmitter and receiver.

d. While some devices now support multiple standards, many of them are not compatible with different inductive chargers.

e. Wireless charging is said to be not as efficient as direct charging. There is a greater possibility of the phone being charged getting too hot. Continuous exposure to heat can in turn lead to battery damage.

Thanks to the use of ultra thin coils, higher frequencies and optimized drive electronics, transfer losses have been reduced to a great extent today. This had led to the rise of more efficient and compact chargers and receivers, facilitating their integration into mobile devices or batteries with minimal changes required.

Significant developments are being seen in the use of wireless charging in the medical sector and for electric vehicles. In the former area, researchers are looking at being able to charge implants and sensors long term that are situated beneath the skin. They have been able to print wireless power transmitting antenna on flexible materials that can be placed under the patients’ skin. This means that under skin devices that aim to monitor the patient status could have a longer term life and offer long observation or monitoring periods thus resulting in better diagnosis from doctors. These devices could also make charging devices such as pacemakers easier on the patient rather instead of exposing a portion of the device by pushing it through the skin to allow corded charging. In other words, headway in this field would make a completely implanted device quite safe for the patient. Of course, the technology will be subject to approval following extensive research on their safety. It’s also important to note that the high speed power transfer achieved with the flexible antennas in these medical based applications needs to be examined for its broader implications.

Another area with noteworthy experimentation is one where a predefined path or conductors would transfer power across an air gap using wireless technology and charge the vehicle on a predefined path such as a wireless charging lane. Sweden, for instance, opened the world's first electrified road last year. A 1.2-mile route, between Stockholm Arlanda airport and a logistics site, the road is said to actively charge cars and lorries as they travel along it using an innovative energy transfer system.

However, a key issue preventing such roads from becoming widespread is the initial cost associated with installing the required infrastructure, especially since it that would benefit only a small percentage of vehicles currently on the road. Another issue is keeping track of how much power each vehicle is consuming from a wireless charging lane. Faced with a no clear commercial way to monetize this technology, many governments have not been keen to spend on building such lanes as part of their public works packages.

That said, large scale wireless charging might just become a reality: there are wireless mats out there already that allow electric vehicles to be charged without a corded connection while parked on such a mat. Although it must be pointed out that these leading electric vehicle manufacturers, such as Tesla, Toyota, and BMW are also looking to design new heat dispersion methods by which they can do away with the excess heat generated between the two charging surfaces.