Where we tell you what a 3D camera is, how it works and and why it is different from the regular variety

Read our latest blog to know how a 3D camera functions, where it is used and more 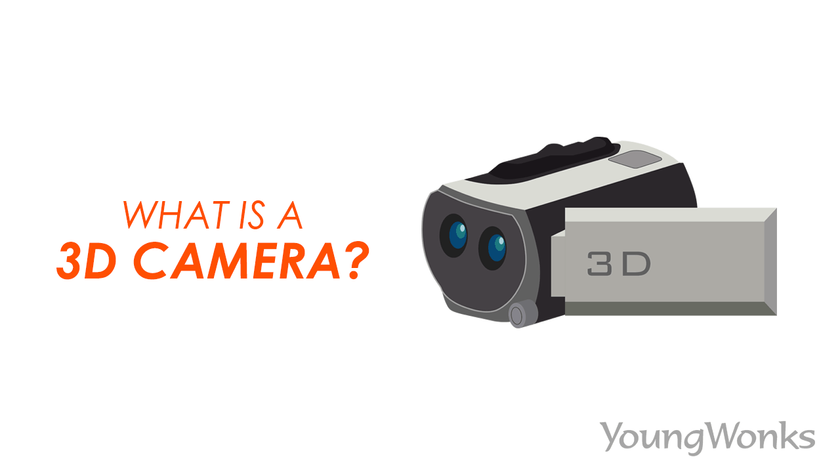 We have all watched 3D movies at some point of time or the other. Which obviously means that one can shoot 3D images or videos today. So how does this happen? The answer is: with a 3D camera. In this blog, we will look at what is a 3D camera, how it functions, where it is used and lots more.

What is a 3D camera?

A 3D camera is an imaging device that allows the perception of depth in images to replicate three dimensions as experienced through human binocular vision. Some 3D cameras use two or more lenses to record multiple points of view, while others use a single lens that shifts its position. The combination of the two perspectives, as with the slightly different perspective of two human eyes, is what makes depth perception possible.

With 3D photography, one can capture an immersive frozen-in-time moment for stills or video content in such a fashion that it seems real enough to touch. The principle behind the 3D effect is called stereoscopy and this technology is known as stereoscopic imaging. The difference between objects seen through the left and right eyes ( known as binocular disparity) is what helps develop perspective in human eyesight, in addition to our accommodation through focusing and visual center interpretation so as to integrate the two perspectives.

The 3D camera was invented by cinematographer Chris Condon who founded StereoVision and invented several 3D camera lenses. In 1969, he and his partner Allan Silliphant got a patent for the world’s first single-camera 3D Motion Picture Lens and they formed the company Magnavision which then changed name to StereoVision Entertainment. In 1972, he received a patent for a special widescreen 3D camera lens for modern 35mm and 70mm reflex motion picture cameras. His StereoVisionUSA 3D lenses have been used in over 50 movies and till date, his legacy lives on even as as 3D visuals have moved on from the theatre to the lounge-room.

How is a 3D camera different from a regular camera?

To better understand this, first let’s look at a regular camera and how it functions. A regular (non 3D) camera records images either as a still photograph or as moving images known as videos or movies, which in turn are stored in a physical medium such as in a digital system or on photographic film. A camera comprises a lens which focuses light from the scene, and a camera body which holds the image capture mechanism. The word camera comes from the Latin words camera obscura meaning dark room.

All cameras have the same basic design: light enters an enclosed box through a converging/convex lens and an image is recorded on a light-sensitive medium (usually, a transition metal-halide). The shutter mechanism controls the length of time that light can enter the camera. A display, often a liquid crystal display (LCD), allows the user to view the scene to be recorded and settings such as ISO speed, exposure, and shutter speed. A movie camera or a video camera operates in a fashion similar to the  still camera, except that it records a series of static images in rapid succession, usually at a rate of 24 frames per second. When the images are run back to back in rapid speed, it gives us the illusion of motion.

In a still film camera, there are three basic elements: the optical element, the chemical element and a mechanical element. In such a camera, there’s a single set of lenses for viewing and photography. Light bouncing off object passes into camera through a set of lenses and onto a mirror. From there the light bounces up and into a piece of glass called a pentaprism. Upon light entering the pentaprism, it bounces around in a complicated way until it passes through the eyepiece and enters your eye. When you press the button on the camera, the mirror flips up out of the way and instead of bouncing into the pentaprism, light from the object passes directly to the back of the camera. There it hits photographic film and starts a chemical reaction as it impacts an array of light sensitive cells. That releases a tiny electric charge in each activated cell. The flash of a camera is our attempt to light up a scene that’s too dim to show up well either on film or electronically.

Now let’s look at 3D camera in greater detail. For that we need to understand stereoscopy. As mentioned above, stereoscopy is the technique of capturing images and rendering them as three-dimensional, with a realistic depth. Such images or videos have to be viewed with specialized 3D glasses. These stereoscopic images are created by overlapping the same image, but offsetting it by a couple of inches. In post-production, one can convert 2D images to 3D stereoscopy by creating anaglyphic (embossed effect) images of the material. To view the material correctly, a special red and cyan 3D pair of glasses would be required.

So how does this 3D camera function? As we know already, it’s all about creating the proper depth in 3D stereoscopic images. So here there are three basic elements one needs to keep in mind: the foreground, the background and the zero parallax. The foreground is the element in your image that will appear closest to the viewer, while the background is the image that will appear farthest. The zero parallax refers to the screen or the default zone. While rendering the images in post-production, the more divergence an element has, the closer it will appear to the audience. Divergence is the amount by which the overlapped images are offset. The more the misalignment, the closer they appear to be to the camera. This means that the objects in the background have the least divergence, and when seen without specialized glasses, the red and cyan outlines can hardly be seen.

So to shoot these stereoscopic images, one needs a specialty lens that will convert images into 3D, or one will have to mount two cameras beside each other. This will simulate the same image but as viewed by your left and right eye respectively. Bear in mind to not angle the lenses or cameras to have the exact same framing. Each lens or camera is really supposed to be pointed straight, giving you two images that are similar but misaligned in framing. By overlapping the images in post-production and manipulating it as an anaglyphic image, we can make a 3D stereoscopic picture or video.

There are many types of stereoscopic images. The most common is the anaglyphic image. This is the technique used for creating 3D movies. If you have heard of the retro Viewmaster toy, you’ll know that there is another way of viewing 3D images: through a specialty projector or a viewfinder. This is when you are seeing two identical images at the same time – one with each eye. The specialty viewer gives the illusion of realistic depth. There are many other types of renders for 3D stereoscopic images. For example, the autostereogram, a graphically-intense picture that can be viewed only with the proper technique. This technology is called autostereoscopic imaging (auto 3D) and since it is screen-based, it does not need viewers to wear special glasses. Then there are the cross-viewing images, when there are two images beside each other that appear to have depth if the viewer crosses his eyes.

Today, 3D television and movies have been made possible thanks to the 3D camera. The thus-created 3D content can be watched on all kinds of 3D displays, including 3D TVs and monitors that use special glasses as well as displays like Nintendo 3DS. With 3D and virtual reality (VR) displays becoming more popular, user-generated 3D content is also expected to become commonplace. And 3D digital cameras, webcams and camcorders will be offering a means of producing that content. For instance, Intel’s RealSense device, a 3D camera, comprises one 1080p camera and one infrared (IR) camera that works along with an IR laser projector to accurately measure 3D space. RealSense cameras are embedded in a few laptops and desktop PCs from Dell, HP and Lenovo.

On one hand, shooting in 3D has yielded some impressive results - examples would be superhero movies and action films that are typically shot in 3D today and have received great response. But then again, shooting in stereo needs constant on-set evaluation of the stereo image; in other words, it will require more equipment and involve higher costs.

Indeed, the biggest drawback of 3D imaging is the fact that it is rather expensive. Low end stereo conversion usually produces tacky results and it’s only the high end conversion - obviously expensive - that is fantastic. And even though the technology works really well, as of now, 3D consumer cameras are hindered by the way we view the images after capture. 3D prints too are quite expensive and time-consuming to produce; similarly, 3D TVs are still in their infancy.

It is hoped that over time, the technology would cost less and become more appealing to the masses.