What is a Diode?

What is a diode, what are its functions, types and applications?

A key electronic component, diodes conduct current primarily in one direction and are used to perform several functions in circuits. In this blog post, we take a look at diodes, their applications and more… 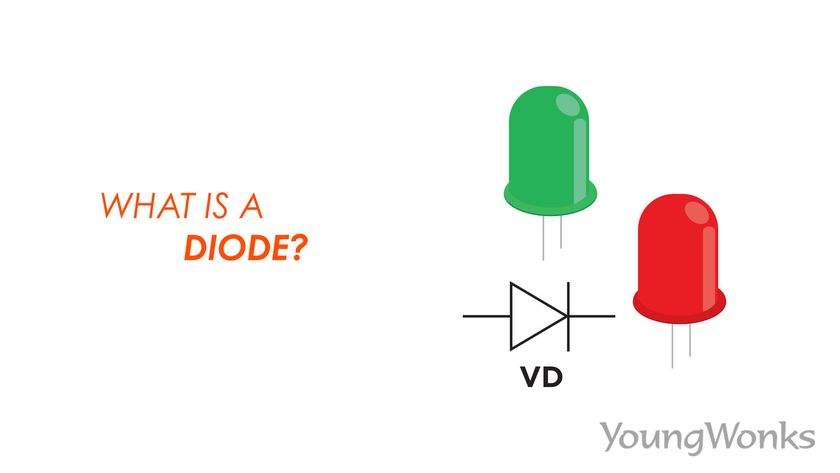 What is a diode? Anyone studying or working with electronics would be familiar with one. Indeed, diodes form a rather common electronic component as they are widely used in various devices today. In this blog post, we shall take a close look at what diodes are, their key functions, various types and major applications.

What is a Diode?

A two-terminal electronic component, a diode conducts current mainly in one direction; this property of its is known as asymmetric conductance. The diode vacuum tube or thermionic diode is essentially a vacuum tube with two electrodes, a heated cathode and a plate, where electrons flow in only one direction, from cathode to plate. So a diode basically has high resistance in one direction and low (typically it’s zero) resistance in the other. They are thus used to protect circuits by limiting the voltage and to also convert Alternating Current (AC) into Direct Current (DC).

It was in 1874 that German physicist Ferdinand Braun discovered asymmetric electrical conduction across the contact between a crystalline mineral and a metal; semiconductor diodes indeed were the first semiconductor electronic devices. Today, the most commonly used type of diode is the semiconductor diode; it’s a crystalline piece of semiconductor material - typically silicon and germanium - with a P-N junction connected to two electrical terminals. Silicon diodes tend to be more popular than their germanium diodes since silicon crystals are not easily damaged by excess heat. Sometimes, other semiconducting materials such as gallium arsenide are also used to make diodes. And though they all have current flowing in a single direction, the way in which it is transmitted varies.

A diode has two terminals known as anode and cathode. The anode is indicated in a circuit diagram (refer to the lead image at the top of the blog) by the arrowhead, whereas the cathode forms the other end.

Key Functions of a Diode

The most common function of a diode is to let the electric current run in one direction (known as the diode’s forward direction), even as it blocks the flow in the other/ opposite direction (aka the reverse). In a manner of speaking, the diode is an electronic version of the check valve and it is this unidirectional behavior - known as rectification - that is used to transform AC to DC. Thus diodes can be used for tasks like extracting modulation from radio signals in radio receivers; more on this in a later section.

It is also important to bear in mind that due to their nonlinear current-voltage characteristics, diodes are also perfectly capable of exhibiting more complicated behavior that goes beyond a simple on–off. For instance, semiconductor diodes transmit electricity only if a certain amount of voltage is present in the forward direction. The voltage drop across a forward-biased diode changes only a little with the current, and is a function of temperature; this effect can be used as a temperature sensor or as a voltage reference.

Also, a diodes’ high resistance to current flowing in the reverse direction can drop suddenly when the reverse voltage across the diode reaches the breakdown voltage value. Interestingly, by choosing different semiconductor materials and the doping impurities mixed into the materials at the time of manufacture, the current–voltage characteristic of semiconductor diodes can be in fact be influenced; such methods are employed to make special-purpose diodes that carry out several functions such as producing light, electronically tuning radio and TV receivers, generating radio-frequency oscillations, protecting circuits from high voltage surges and regulating voltage.

In this section we shall look at the various types of diodes.

Light Emitting Diodes (LEDs) are, as their name suggests, diodes that light up when the current between the electrodes passes through them. Among many diodes, the light produced is not visible since their frequency levels do not lend them visibility. LEDs can be found in different colors; the color of the light varies as per the energy gap of the semiconductor used in the LED.

Laser diodes produce coherent light. Expensive when compared to LEDs and cheaper when compared to other laser generators, these diodes are popularly used in CD drives, DVDs and laser devices. However, they have a limited life and do not last too long.

A reverse bias type diode, it works using the avalanche effect. When voltage drop remains constant and is not affected by the current, the breakdown of avalanche takes place. These diodes are highly sensitive which makes them ideal for photo detection.

A very useful type of diode, it offers a stable reference voltage. They work in reverse bias and break down when a certain voltage is hit, but when the current flowing through the resistor is limited, a stable voltage is produced. Zener diodes are mainly used in power supplies to provide a reference voltage.

Used mainly in rectifier applications, schottky diodes have a lower forward voltage (between 0.15 and 0.4 volts) when compared to other silicon PN junction diodes.

Diodes that can detect even a small amount of current flow resulting from the light are called photo-diodes. Used for light detection, these are reverse bias diodes commonly found in solar cells and photometers. They are also used for electricity generation.

These layers are typically made up of two layers of semiconductors; one layer is doped with P-type material and the other with N-type material. The combination of these both P and N-type layers forms a junction known as the P-N junction. Hence, the name P-N junction diode. Used for the rectification process, P-N junction diodes are also known as rectifier diodes; they allow the current to pass in the forward direction and block the flow of current in the reverse direction.

In this section, we shall look at the uses of diodes, aka semiconductor devices.

Used in FM transmitters, where noise peaks can only reach a certain value,  clipping circuits put off the voltage beyond the preset value in such a way that the remaining part of the input waveform is not disturbed. Going by the diode configuration in the circuit, these clippers can be classified as series clipper and shunt clipper.

Low and high impedance states of the logic switch being akin to the forward and reverse-biased conditions of the diode, diodes can indeed be used to carry out digital logic operations, such as AND, OR, etc. Most modern logic gates are MOSFET based.

The most common and key use case of a diode is the converting AC power to DC power. Using diodes, one can build various types of rectifier circuits. The basic types include half wave, full wave center tapped and full bridge rectifiers.

Diodes are also used for reverse polarity protection. Reverse polarity or current protection helps avoid the damage that can take place when the battery has been connected in a wrong way or while reversing the polarities of the DC supply.

Diodes used for protection of solar panels are known as bypass diodes. If the solar panel develops a fault, has suffered a damage or is not getting enough sun due to shade/ fallen leaves/ snow and other obstructions, the overall output power goes down and there’s hot spot damage since the current of the rest of the cells has to pass through the faulty or shaded cell thereby causing overheating. The bypass diode then operates by protecting the solar cells against such a situation.

Voltage multiplier circuits typically comprise at least two diode rectifier circuits. These multiplier circuits can be of different types: voltage doubler, tripler, quadrupler, etc. When diodes are used in combination with capacitors, one gets the odd or even multiple of the input peak voltage at the output.

In an inductor, the sudden removal of a supply source generates higher voltage due to the stored magnetic field energy. This unexpected rise in the voltage can in turn damage the rest of the circuit. To avoid this, large voltage spikes need to be contained and thus a diode is connected across the inductor or inductive loads. These diodes are known by different names in different circuits, including snubber diode, flyback diode, suppression diode, freewheeling diode and more.