What is a Magnetometer and How Does It Work?

An introduction to magnetometers, where they are used and how they work

This blog takes a look at magnetometers, their variants and applications today… 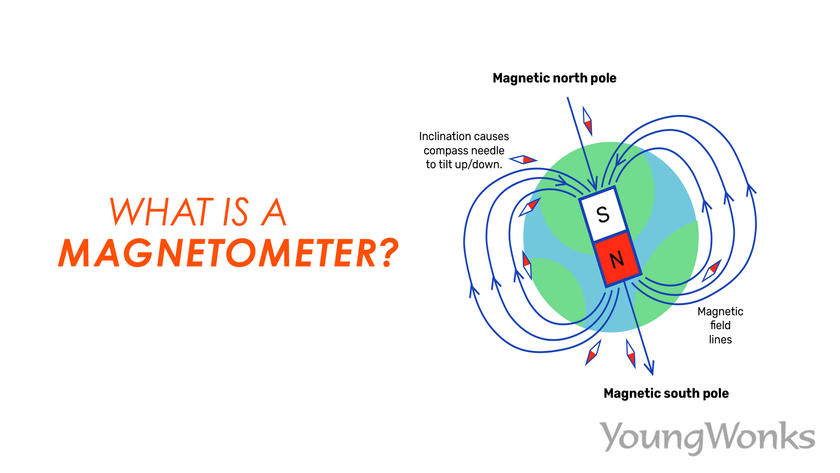 What is a Magnetometer?

How does a Magnetometer Work?

A magnetometer can work in different ways. Take for instance, a compass. Now we know that the compass’s needle aligns itself with the north of the earth’s magnetic field when it’s at rest. In other words, the sum of the forces acting upon it is zero and the weight of the compass’s own gravity cancels out the earth’s magnetic force acting upon it. This simple example explains how this property of magnetism lets other magnetometers work. Electronic compasses can similarly help indicate which direction is the magnetic north using phenomena such as the Hall effect, magneto induction, or magnetoresistance.

Let us now try to understand the physics behind how a magnetometer works.

Magneto induction methods, on the other hand, calculate how magnetized a material is or becomes when upon exposure to an external magnetic field. This includes creating demagnetization curves, also called B-H curves or hysteresis curves, which measure the magnetic flux and magnetic force experienced by a material being exposed to a magnetic field.

It is these curves that allow scientists and engineers to classify material making up devices such as batteries and electromagnets as per their magnetic strengths, which is revealed by their response to external magnetic fields.

Magnetoresistance methods, meanwhile, detect an object’s capacity to change electrical resistance upon exposure to an external magnetic field. Like  magneto induction techniques, magnetometers use the anisotropic magnetoresistance (AMR) of ferromagnets (aka materials that have been subjected to magnetization and continue to have and display magnetic properties even after the magnetization has been removed).

Basically, AMR is about detecting between the direction of electric current and magnetization in the presence of magnetization. Upon being exposed to an external magnetic field, the spins of the electron orbitals making up the material redistribute themselves. The electron spin here is in fact a form of angular momentum. So the electrical resistance is the greatest when the current is parallel to an external magnetic field so that the field can be measured correctly.

Magnetometers are mainly classified under two categories: scalar and vector manometers. Scalar manometer is used to measure accurately the magnetic flux intensity’s scalar value. These scalar magnetometers can be further differentiated as proton precession, overhauled effect and ionized gas magnetometers. A vector manometer, on the other hand, is used to measure the magnitude and direction of the magnetic field. These can be sorted into types such as rotating coil, Hall Effect, magneto resistive, fluxgate, search coil, SQUID, and SERF magnetometers.

Here a low power radio frequency signal is used instead of the solenoid for aligning the protons. So when an electron-rich liquid combines with hydrogen, it is subjected to a radio frequency (RF) signal. With overhauled effect the protons get coupled to nuclei of the liquid. Given how the precession frequency is linear with the magnetic flux density, it can be used to measure the strength of the magnetic field. Moreover, boasting faster sampling rates, these magnetometers need far less power.

More accurate than the proton precession magnetometers, ionized gas magnetometers consist of vapor chambers filled with the vapors like cesium, helium, and rubidium, and photon emitter light. When the cesium atom meets the photon of the lamp, energy levels of the electrons fluctuate at a frequency corresponding to the external magnetic field, thus helping measure the intensity of the magnetic field.

Used for high sensitivity applications, here the fluxgate sensor drive -made up of a magnetically susceptible core wound by two coils of wire - has an alternating drive current running a permeable core material. One coil here has AC current running through it and the constantly changing field induces an electrical current in the second coil. This current change is based on the background field. So, the alternating magnetic field, and the induced output current, are not in sync with the input current and the extent varies as per the strength of the background magnetic field.

These are made up of semiconductor devices where the electrical resistance changes as per the applied or ambient magnetic field.

These comprise two superconductors separated by thin insulating layers to form two parallel junctions. Given how sensitive they are to the low range intensity fields, they are most often used to measure the magnetic fields produced by the brain or heart in medical applications.

As the coil rotates, the magnetic field induces the sine wave signal in the coil. Given that this signal amplitude is proportional to the strength of the magnetic field, the magnetometer is thus able to measure the latter. However, this method is outdated today.

Magnetometers have several uses today. Let us look at their applications.

Compasses: Today, magnetometers have been miniaturized to the point where they are easily included in integrated circuits at a low cost and they are thus increasingly being used as miniaturized compasses (MEMS magnetic field sensor).

Geographical surveys: Magnetometers are widely used for measuring the earth’s magnetic field, especially in geophysical surveys. They are used to find and identify magnetic anomalies of various types, and to ascertain the dipole moment of magnetic materials. Surveyors use them in geophysics applications.

Military purposes: Magnetometers are used in defense and navy to carry out submarine activities and submarine detection as well. In fact, countries such as the United States, Canada and Australia have categorized sensitive magnetometers under military technology, and they thus control their distribution.  Defense and aerospace: Magnetometers are also used on land, in the air, at and under sea and in space.

Oil and gas exploration: Magnetometers are used for drilling discovered wells. They are used in drilling sensors which are used to detect the direction or path for the drilling processes.

Pipeline monitoring: Similarly, magnetometers are also used for inspecting corrosion of pipelines in underground systems and for monitoring them.

Health care monitoring: Interestingly, magnetometers also have several applications in healthcare. They are particularly useful when it comes to performing cardiac applications, such as diagnostic systems that non-invasively measure heart functions.