What is a Transistor?

What is a transistor, how does it work and what are its various types and applications? Read our blog to know more…

Where we look at transistors, how they function, their key applications and more… 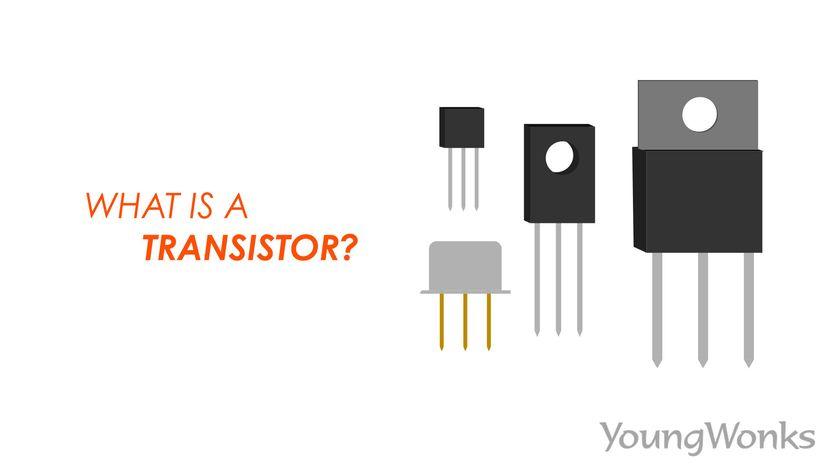 What is a transistor? When we learn about electronics and basic circuits, transistors are a major component; other electronic components include resistors, inductors, capacitors and diodes. In this blog, we shall look at transistors, what they do, how they function and their major applications.

What is a Transistor?

A basic building block of modern electronics, a transistor is a semiconductor device that’s used to amplify or switch electrical signals and power. It is made of semiconductor material and has at least three terminals for connection to an electronic circuit. The current is controlled through a pair of terminals by the voltage or current applied to another pair of the transistor’s terminals. And since the controlled power aka output can be higher than the controlling power, i.e. input, a transistor is able to amplify a signal. Some transistors are packaged individually, but many are found embedded in integrated circuits.

The invention of transistors has indeed revolutionized the field of electronics, as they helped facilitate the creation of smaller and cheaper radios, calculators, and even computers, among other electronic devices.

A little bit about the history of the transistor: it was the Austro-Hungarian physicist Julius Edgar Lilienfeld who came up with the concept of a field-effect transistor in 1926, although it was not possible to build a working prototype at that point of time. It was only in 1947 that the first working device - a point-contact transistor - was built by American physicists John Bardeen and Walter Brattain as they worked under William Shockley at Bell Labs; the trio even won the 1956 Nobel Prize in Physics for this breakthrough. Today, the most popular type of transistor is the metal–oxide–semiconductor field-effect transistor (MOSFET), that was also invented at Bell Labs; Mohamed Atalla and Dawon Kahng built it in 1959.

How Does A Transistor Work?

Before we look at how transistors work, let’s talk about what transistors are made up of. Transistors are usually made using very pure silicon, while some are made from germanium and other semiconductor materials. A semiconductor is typically a material like germanium and silicon that conducts electricity in a ‘semi-enthusiastic’ manner. It thus falls somewhere between a real conductor such as copper and an insulator (like the plastic wrapped around wires).

This semiconductor material is lent special properties thanks to a chemical process called doping. The doping helps produce a material that either adds extra electrons to the material (which is then called N-type for the extra negative charge carriers) or it makes holes in the material’s crystal structure (which is then called P-type as it results in more positive charge carriers). The transistor’s three-layer structure contains an N-type semiconductor layer sandwiched between P-type layers (a PNP configuration, making it a PNP transistor) or a P-type layer between N-type layers (an NPN configuration, making it an NPN transistor).

Now back to the main question: how does a transistor work? A transistor is essentially a tiny electronic component that can perform two different tasks. It operates either as an amplifier or a switch.

When a transistor functions as an amplifier, it takes in a small electric current at one end, known as the input current, and generates a much bigger electric current, called the output current, at the other. So it acts like a current booster. Thanks to this functionality, transistors are used in devices such as hearing aids, (also among the earliest things transistors were used for). A hearing aid has a tiny microphone in it that picks up sounds from the surroundings and converts them into fluctuating electric currents, which are then fed into a transistor that boosts them and powers a tiny loudspeaker, so the wearer ends up hearing a much louder version of the sounds being produced.

When a transistor works as a switch, a tiny electric current flowing through one part of a transistor creates a much bigger current flow through another part; the small current basically switches on the larger one. This is also how computer chips work. For instance, a memory chip has millions or even billions of transistors and each of them can be switched on or off individually. In fact, given the fact that each transistor can be in two distinct states, it can store two different numbers, zero and one. Thanks to billions of transistors, a chip can store billions of zeros and ones; in other words, it can store billions of characters (ordinary numbers and letters). Thus we see why transistors form the basic elements in integrated circuits (IC), which are in turn made up of huge numbers of transistors connected with circuitry and baked into a single silicon microchip.

It is important to note here that a transistor can have only one kind of charge carrier, like in case of a field-effect transistor, or it can have two kinds of charge carriers, as seen in bipolar junction transistor (BJT) devices. In comparison with the vacuum tube, transistors are smaller and take up less power to function. That said, vacuum tubes have shown advantages over transistors at very high operating frequencies or high operating voltages. Today, several types of transistors are created as per standardized specifications by multiple manufacturers.

To understand better how transistors work in circuits, check out our video here:

Transistors can be categorized on the basis of different criteria. We look at them below.

Classification on the basis of the semiconductor material (dopants): Here, transistors can be metalloids; this covers transistors made of germanium and silicon, as also those made with the compounds gallium arsenide and silicon carbide; ones made with silicon-germanium and even carbon graphene.

Classification on the basis of electrical polarity (positive and negative): As per this, transistors can be NPN, PNP (BJTs), N-channel and P-channel (field effect transistors, aka FETs).

Classification on the basis of maximum power rating: Transistors can be low, medium or high.

Classification on the basis of maximum operating frequency: Low, medium, high frequencies, radio frequency (RF) and microwave frequency are the different categories under this criterion.

Classification on the basis of application: Transistors can be switches, general purpose ones, audio, high voltage, super-beta or matched pair.

The main use of transistors is for switching applications and for both amplification and switching.

Phototransistors are used to produce current flow depending on the amount of light shined upon them. These are used in punch-card readers, security systems, encoders, electric controls, computer logic circuitry, relays and lighting control.

Bipolar Junction Transistors (BJTs) are used to create a greater current flow from the emitter to collector when a small amount of current is passed through the base. They are used in logic circuits, as oscillators, amplifiers, multivibrators, detectors, modulators and demodulators. They are also used in timer and time delay circuits, electronics switches and for switching circuits.

Field Effect Transistors (FETs) act as voltage controlled devices. With very high input impedance, it helps to run very little current through them. They are cheaper, easier to manufacture and cause less loading; today they are used in low noise amplifiers, analog switches, choppers, current limiters and phase shift oscillators.

Heterojunction Bipolar Transistors (HBTs) offer faster switching speeds and are thus used in analog and digital microwave applications. Plus, they are used as power amplifiers in mobile and laser drivers.

Darlington transistors are more sensitive and can thus pick currents from human skin; this is why they are used in touch-sensitive buttons.

Avalanche transistors are used as switches in circuits; moreover, they can switch high currents in less than nanosecond transition times.

Advantages and Limitations of Transistors

Before transistors were developed, vacuum (electron) tubes were the main active components in electronic equipment.

Shared below are the main advantages that have paved the way for transistors being used in most applications today in place of vacuum tubes:

Transistors could have the following limitations:

What is sklearn Logistic Regression Aug 14