What is a sensor?

What is a sensor, how does it work and what are its various types and applications? Read our blog to know more…

Sensors are used to measure changes in physical properties such as temperature, resistance, capacitance, conduction, heat transfer etc. In this blog, we see how they work and where they are used 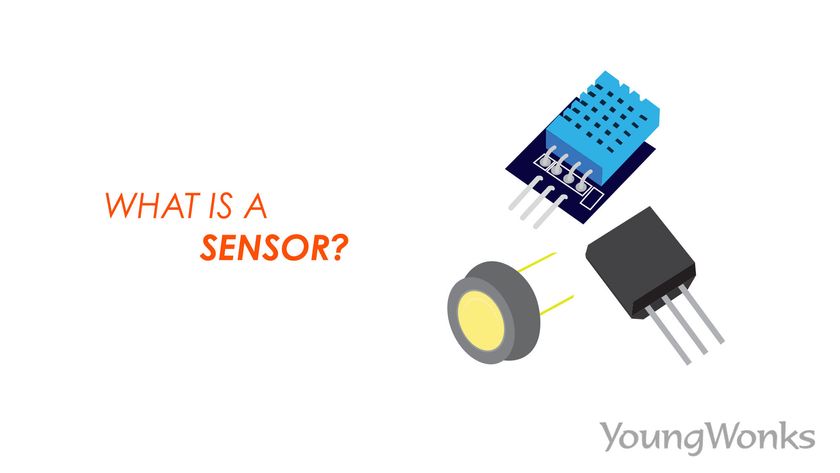 What is a sensor? In the world of electronics, sensors today form a key component. This blog then shall offer an introduction to what a sensor is, how it works, the different types of sensors and their uses of sensors today.

What is a sensor?

A sensor is an input device that shares an output in the form of a signal with regards to a particular physical quantity (aka input). In other words, it is a device that converts signals from one energy domain to electrical domain. Thus a sensor is part of a bigger system sharing input to a main control system.

Broadly speaking, a sensor could be not just a device, but also a module, machine, or subsystem that aims to ‘sense’ events or changes in its environment and pass this information to other electronics, more often than not a computer processor. This means that a sensor is always used along with other electronic items. They are used in scores of everyday objects that measure physical properties such as temperature, pressure, resistance, capacitance, conduction, heat transfer etc.

The technological advancements today have paved the way for more sensors to be produced on a microscopic scale as microsensors using MEMS technology. These microsensors typically measure much faster and are more sensitive. And thanks to increasing demand for quick, affordable and reliable information in today's world, disposable sensors—that cost less and are easy‐to‐use, making them ideal for short‐term monitoring —are quite popular today.

How does a sensor work?

As mentioned earlier, a sensor is used to detect changes in its environment and react to some output on another system. A sensor turns a physical phenomenon into an analog voltage (or sometimes a digital signal) that can be measured and converted into a readable display or passed on for reading or further processing by another system.

Let us look at a couple of examples of sensors. Take for instance, the microphone. It is a sensor that converts sound energy to an electrical signal that can be amplified, transmitted, recorded, and reproduced. Even the common mercury thermometer is a sensor of sorts. Used to measure temperature, it has colored mercury in a closed tube. This sensor depends on mercury’s consistent and linear reaction to changes in temperature.

Sensors can be classified into several categories. While some classifications are simple, others aren’t. Let us look at the simple ones.

Sensors can be also classified under analog and digital categories. Analog sensors generate an analog output or a continuous output signal (usually voltage but at times other quantities such as resistance) with regards to the quantity being measured. On the other hand, digital sensors work with discrete or digital data, be it for conversion or transmission.

It is important here to note the differences between sensors and actuators. The two often complement each other's work and yet it is a sensor that turns a physical attribute to an electrical signal, whereas an actuator does the opposite by converting an electrical signal to physical action.

In this section, we shall look at the various types of sensors and their uses.

A proximity sensor is a non-contact type sensor that can recognize the presence of an object. A form of position sensors, they are used to detect if and when an object has moved within some a certain distance of the sensor. They are implemented using different techniques such as optical (in case of infrared or laser), sound (ultrasonic), magnetic, capacitive, etc. The most commonly used proximity sensors are the inductive proximity sensor and the capacitive proximity sensor; the former can detect only metal targets whereas the latter can detect anything carrying an electrical charge. Proximity sensors can be found in mobiles, elevators (automatic doors), cars (especially self-driving cars), assembly lines and aircrafts.

Infrared sensors, also known as IR sensors, are light-based sensors used for proximity and detection. For instance, they are used as proximity sensors in all mobile phones. The two types of IR sensors are transmissive and reflective. In transmissive IR sensors, the IR transmitter and the IR detector face each other so when an object passes between them, the sensor can detect the object. In case of reflective IR sensors, the transmitter and the detector are located adjacent to each other facing the object and when the object is in front of the sensor, the infrared light from the IR transmitter is reflected from the object and is detected by the IR receiver thereby helping the sensor sense the object. IR sensors are used in mobile phones, robots, industrial assembly, automobiles etc.

Another non-contact type sensor is the ultrasonic sensor that is used to calculate the distance and the velocity of an object. An ultrasonic sensor uses a transducer to send and receive ultrasonic pulses that relay back information about an object’s proximity. These sensors are used in various industries for purposes such as robotic sensing, liquid level control, detecting the presence of people, detecting breaks in threads or wires and so on.

Light sensors are passive devices that convert light energy into an electrical signal output. They are also known as photo sensors or photoelectric devices since they convert light energy (photons) into electronic signals (electrons). They are used in consumer electronics (think auto screen brightness in smartphones and tablets), automobiles and security applications.

Commonly used in safety-related applications are smoke and gas sensors. Today, it is standard practice for offices and industries to equip their spaces with smoke detectors that can sound an alarm upon detection of smoke. Gas sensors are found in laboratories, large scale kitchens and industries, where they are used to detect different gases such as LPG, propane, butane, methane, etc. Smoke sensors are also installed in homes today as a safety measure. Many of these sensors are in fact pressure sensors, these sensors measure the pressure of gases or liquids.

Optical sensors are sensors detecting light intensity. They look out for instances when the ambient light levels go beyond or dip below a prescribed level, or they can even be highly sensitive devices used for detecting single photons. Most optical sensors generate an electrical output.

Color sensing applications in the field of image processing, color identification, industrial object tracking use color sensors. One example would be the TCS3200; a simple color sensor, it can detect any color and send out as an output a square wave proportional to the wavelength of the detected color.

As their name suggests, humidity sensors detect humidity. Used in weather monitoring systems, these sensors share data about humidity and temperature as well; this is because relative humidity (a ratio of water content in air to maximum potential of air to hold water) is dependent on temperature of air. Humidity sensors are used in the meteorology, medical, automobile, HVAC and manufacturing industries; these sensors can be the capacitive, resistive or thermal conductive type.

All touch screen devices - think mobile phones, tablets, laptops - come with touch sensors. Trackpads in laptops are also a common application. These sensors can detect the touch of a finger or a stylus; they can be classified into resistive and capacitive types; most modern touch sensors belong to the latter category as they are more accurate and have better signal to noise ratio.

Motion sensors, also known as motion detectors, detect nearby people or objects. An important component of security system, such sensors send alert to your security system, and in case of newer systems, even right to one's mobile phone.

Often among the simplest and inexpensive sensors, tilt sensors are used to detect inclination or orientation. Earlier, they were made using mercury (thus earning the name mercury switches) but modern tilt sensors contain a roller ball. They are used in agriculture, manufacturing, construction and aircraft industries.