What is an Inductor?

What is an inductor, how does it work and what are its various types and applications? Read our blog to know more…

Where we look at inductors, how they function, their key applications and more… 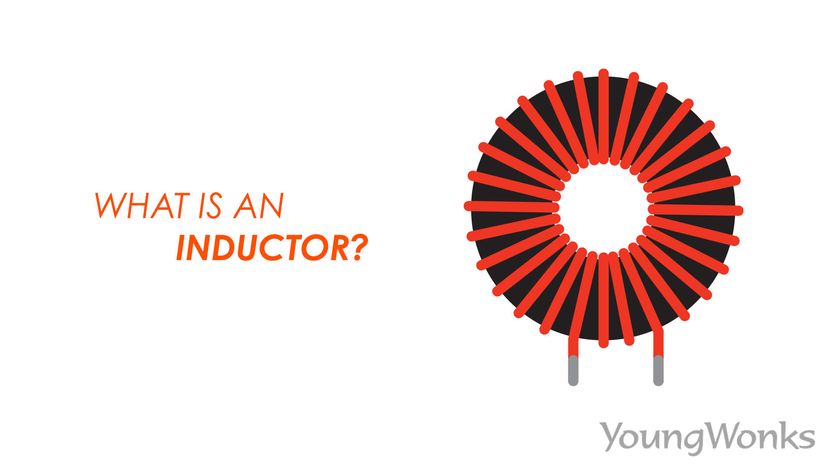 What is an inductor? A key electrical component, the inductor has many uses today. In this blog, we shall look at what these inductors do, how they function, their major applications and more.

What is an Inductor?

An electric current passing through a conductor produces a magnetic field surrounding it. An inductor then is a passive electrical component that stores this energy in a magnetic field when the electric current flows through it. Also known as a coil, choke, or reactor, the inductor typically consists of an insulated wire wound into a coil. Basically, the inductor is a passive two-terminal electrical component that has inductance. The SI unit of inductance is Henry (named after American scientist Joseph Henry).

Now, inductance is the ratio of the voltage to the rate of change of current. So L = V / ( I / t ) where L is inductance, V is voltage and current is I.

Another way of arriving at the inductance is looking at the magnetic flux linkage (ΦB) generated by the current (I), which in turn varies as per the geometric shape of the electrical circuit. Their ratio defines the inductance L.  Thus,

It is important to note here that an inductor is an electronic component consisting of a wire or other conductor with a shape aimed at increasing the magnetic flux through the circuit, usually in the shape of a coil or helix, with two terminals. Winding the wire into a coil increases the number of times the magnetic flux lines link the circuit, thus increasing the field and thus the inductance.

How Does An Inductor Work?

In the above image, we see a battery, a light bulb, a coil of wire around a piece of iron (this is the inductor) and a switch. Now if we take the inductor out of this circuit, we would get a normal flashlight since once we close the switch, the bulb would light up. However, if there’s an inductor in the electronic circuit as shown, what we see is entirely different.

Bear in mind here that the inductor is an electromagnet and the light bulb is a resistor; it’s the resistance that produces heat to make the filament in the bulb glow. With the wire in the coil having lower resistance, one would think that the bulb would shine dimly upon closing the switch. But what we see is that the bulb burns brightly and then gets dimmer and when one opens the switch, the bulb burns very brightly before quickly going out.

The reason for this circuit behavior is the inductor. When current first starts passing through the coil, the coil builds up a magnetic field and as it does so, it comes in the way of a normal flow of current. After the field is built, the current flows normally through the wire. So when the switch is opened, the magnetic field around the coil keeps the current flowing in the coil till the field collapses. This current makes sure the bulb is lit for a brief period of time even though the switch is open. So basically the inductor has stored energy in its magnetic field, and it resists any change in the amount of current flowing through it.

In this section, we shall look at the different types of inductors.

These are made using ferromagnetic material such as iron cores and their higher magnetic permeability means they have higher power and offer greater inductance. They are ideal in situations when low space inductors are needed. Typically used in audio equipment, they come with core losses and limited high frequency capacity.

Made with ferrite materials as cores, they are made from a combination of manganese, zinc, barium, nickel, etc. and thus have high magnetic permeability. Ferrite core inductors are of two types: soft ferrites and hard ferrites.

Soft ferrites are used in inductors and transformers since they reverse their polarity without external energy. Able to change their magnetization easily, they are excellent magnetic conductors.

Hard ferrites, meanwhile, do not demagnetize properly and are hence used in permanent magnets. Even after the magnetic field has been removed, their polarity is unchanged.

Made using pure iron powder, these inductors have air gaps so high magnetic flux can be stored. Thus, higher direct current levels can pass through such inductors. But the permeability of the cores used here being less, the inductors are stable in high temperatures.

Here, there are many laminations on the cores; the laminations can contain different materials and thicknesses. The sheets come with insulation coating offering greater electrical resistance and minimising core losses. They are typically used in power filtering devices and low frequency detectors.

These inductors have ring-shaped toroidal cores, made with ferromagnetic materials. With low magnetic flux leakage, they offer high magnetic fields. They have high inductance values and high energy transferring abilities and are used in many appliances such as refrigerators, air conditioners, medical devices, switching regulators and even musical instruments.

Used in power supply circuits and AC inputs, these inductors can handle high currents while reaching the area of magnetic saturation. They are used to reduce core losses in applications needing voltage conversion and have low magnetic flux leakage. They are also used to filter noise produced by Electromagnetic Interference (EMI).

Two conductors connected through electromagnetic induction are known as coupled inductors; they have two windings around one core. Here, the AC current flowing in one inductor produces voltage in the other. Used for increasing series inductance, they are found in energy conversion circuits.

These inductors have an insulation coating, either of molded plastic or ceramics. Their cores are made of ferrite materials and the inductors come in small sizes, which is why they are found in printed circuit boards, computers and mobiles.

Variable inductors allow the inductance to vary. They are designed in different ways with a movable ferrite core that is placed in a thread-like structure such that the permeability of the core can change. Highly reliable, they are mainly used in radio frequency applications.

Made using small thin-film coils that have limited maximum value. But they offer stable inductance, high quality factor and have high performance compact chips and are used in wireless and LAN networks, amplifiers, mobile devices and power suppliers.

Wounded on cylindrical bobbins, these inductors can work in different frequency levels and are used in printed circuit boards, power conversion, filter circuits and switch mode power supplies. However, they come with space limitations and are known to have AC losses in high frequency applications.

In this section, we take a look at the various applications of inductors today.

Inductors for storing electrical energy in a device

As seen above, inductors can store energy for a small period of time since the energy being stored as a magnetic field is gone when the power supply is out. Thus we see inductors used in computer circuits where power supplies can be switched.

In induction motors, the magnetic field produced due to alternating current makes the shaft in the motor rotate. The speed of the motor can be fixed as per the frequency of the supply of power from the source.

Inductance is a key principle at use in inductive proximity sensors; here the magnetic field in the coil opposes the flow of electric current. This proximity sensor mechanism is in turn used in traffic lights to check traffic density.

Thanks to inductors, the tuning circuits can pick their desired frequency. Today, capacitors are used with inductors in several electronic devices. For instance, they are used as radio tuning circuits, which are a type of television used to modify the frequency and help to select within multiple channels of frequency.

When AC current flows through inductors, it generates a current flow in the opposite direction. This leads to the inductor choking the AC current flow and passing the DC current. The mechanism is thus used in power sources where the AC supply is converted into DC.

Inductors can be used as relays since they can generate behaviour as an electrical switch. When an inductor coil is used in the switch, the magnetic field is built wherever the switch comes in contact with the flow of AC current.

Inductors combined with capacitors can be used as filters. The input signal’s frequency upon entering the circuit is limited by these filters. As the frequency of supply increases, the inductor’s impedance also goes up.

Inductors are used in ferrite beads that are used in computer parts and in charging cables of mobiles. Here they help lower the frequency of the radio interface that the cable creates.