What is sklearn Logistic Regression?

What is Logistic Regression? How to build an sklearn logistic regression model? Regression is a type of supervised learning which is used to predict outcomes based on the available data. In this beginner-oriented tutorial, we are going to learn how to create an sklearn logistic regression model. We will make use of the sklearn (scikit-learn) library in Python. This library is used in data science since it has the necessary tools required for data analysis and to apply machine learning algorithms to our data.

To get deeper understanding about regression and linear regression , refer to our blog on Getting Started with sklearn Linear Regression. https://www.youngwonks.com/blog/Getting-started-with-sklearn-Linear-Regression

What is logistic regression?

You can also import math and then use math.exp

This is called a logistic/sigmoid function. This is also known as the logit or logistic function and is a multinomial expression.

Bernoulli Distribution is a discrete probability distribution where only two outcomes are possible.

What is a sigmoid/logit function? 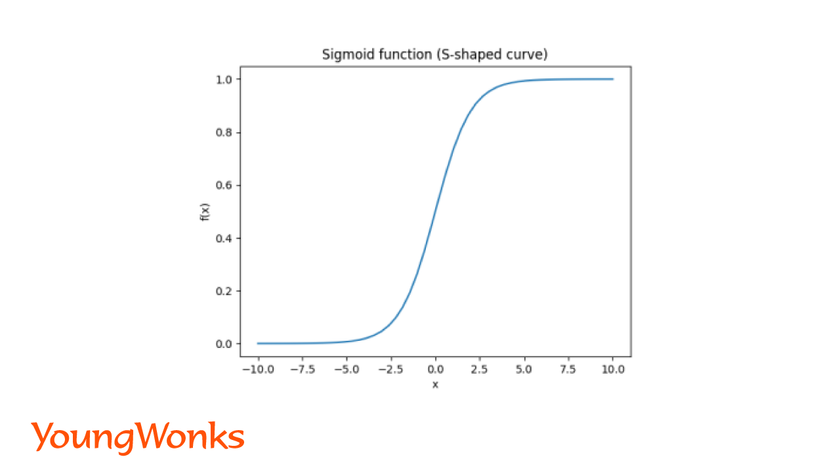 We will create models by applying logistic regression between two variables and use that to predict target classes (dependent variable). The following steps will help you do that.

Let us look into the steps required use the Binary Classification Algorithm with Logistic regression.

Step 1: LOAD THE DATA and IMPORT THE MODULES

The data has to be in the form of pandas dataframe using the pandas library.

In this blog, we will use the diabetes dataset to create a binary classification model.

Use the link given below to download the dataset:

We will use the diabetes dataset to train our model and then predict whether a person is suffering from diabetes or not. Data preprocessing is used to analyze, filter and manipulate the dataset.

Here, we have to make sure there are no missing values in the dataset.

The below function will help us to determine if there are missing values or not.

Define the independent and dependent variables.

We have to separate the dependent(X) and independent variables(Y) and store them into different variables. 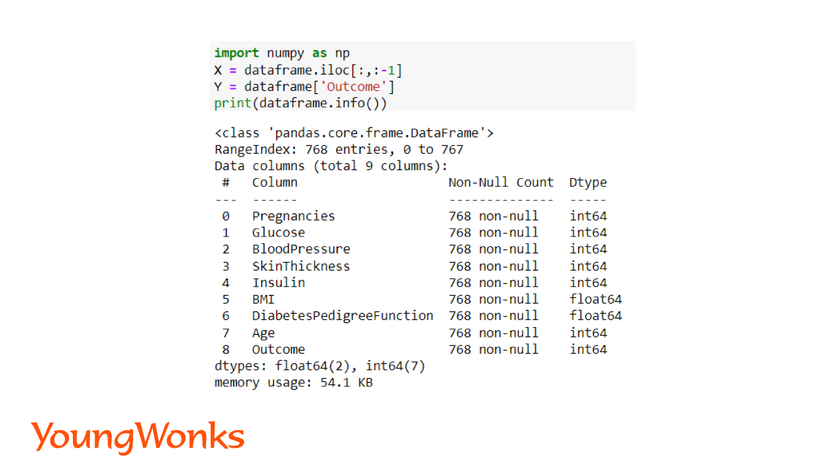 We need to split the data to a training set and a test set. 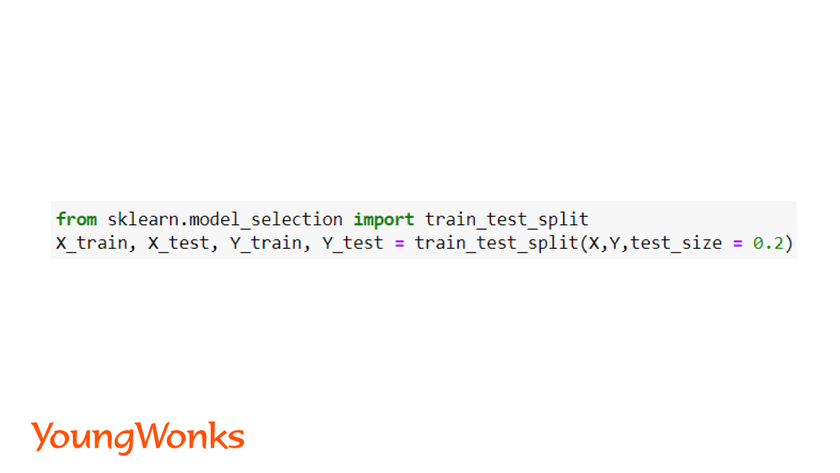 Step 4: CREATE THE MODEL AND FIT THE MODEL Use the model to predict the classes for new data. Both of the above method returns an array of predicted values. However, there is slight difference.

After we use the model to predict the values for the testing data, we can visualize the data.

Data Visualization: Plot a scatter plot to visualize the test data and the predicted data.

To perform visualization of all the columns in the dataset, subplots can be generated.

In the diabetes dataset, we are plotting the test data for age and the predicted values. 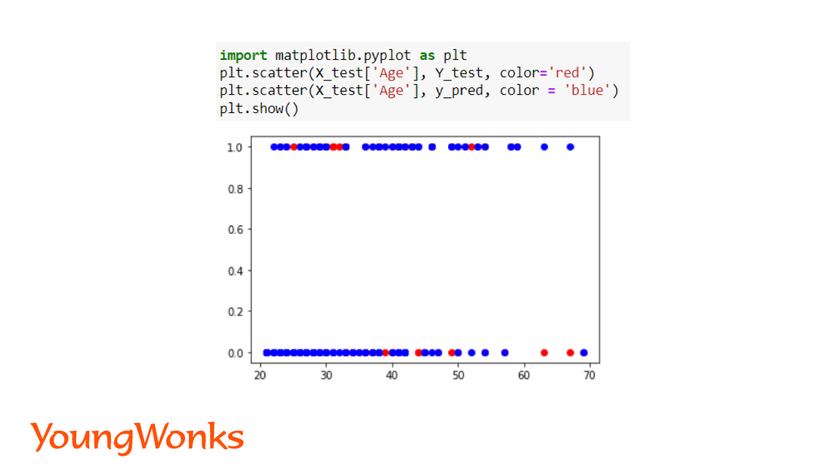 Validate how accurately the model has predicted the category.

It validates for each entity from the testing data, by comparing it against the actual results known already.

Evaluation of the machine learning model is an important step since it allows us to understand how good and accurate the model is.

Metrics to be derived from the Confusion Matrix: In this example, we see there are 91 true positive and 25 true negative. This shows that 91 patients are diabetic and 25 are not diabetic. This data show the correct results of the patients. However, 17 false positive indicate that 17 patients have been wrongly determined as diabetic and 17 false negative have wrongly not detected with diabetes. Therefore, it is very important to further improve the model in order to predict diabetic and non-diabetic patients correctly.

ROC Curve is usually used for binary classification algorithms. This curve plots the true positive against the false positive using a threshold value. 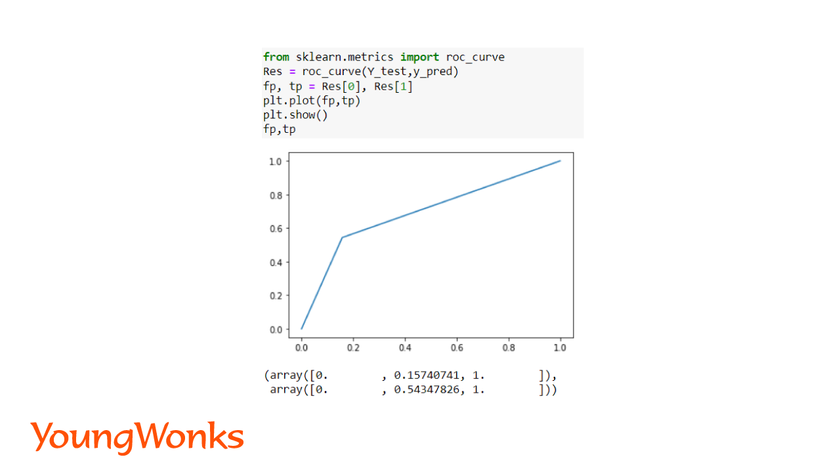 In the curve shown above, the threshold value is 0.15 and 0.54. The curve is above the diagonal which depicts it is a good model.

We can also determine the error rate which tell us how often the model can go wrong.

We will use the iris dataset for the creating a multi-class model. Use the link below to download the dataset: https://www.kaggle.com/datasets/arshid/iris-flower-dataset

Using this dataset, we use the sepal and petal length and width to classify the species flower.

We follow the same steps as binary classification model. Here, we have created a dictionary having all the three target species class.

We have visualized the sepal length and width for the three species of the flower using the scatter plot.

Apart from using the pandas, matplotlib and numpy library, data scientists also use the seaborn library. This library provides advanced graphing technique which is useful in multiple linear regression. Using a single line of code, multiple graphs can be generated of each independent variable against dependent variable. It also ignores missing values during graph generation.

Create a model and fit the model. Predict the values for the test data. In order to visualize the data, plot a scatter plot for predicted and test data points. Using the iris dataset, we will use the accuracy score and confusion matrix to validate the model. 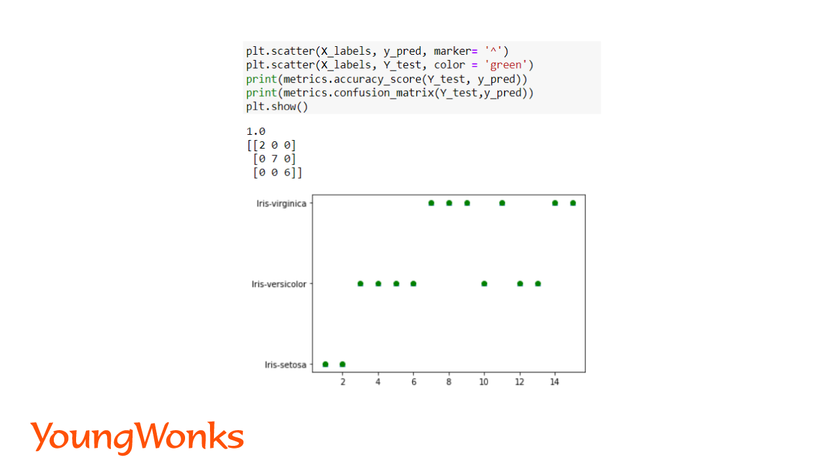 In the above example, the accuracy is 1 which shows the model is perfect, confusion matrix also depicts the same. It is successfully able to predict the species using the features of the flower.

The purpose of creating this model is to classify the iris flower species using its features. With diabetes model, we can predict faster if patient has diabetes or not using the past record and their profile. This will help in improving the health system and providing faster treatment to patients.

At YoungWonks Coding Classes for Kids, we teach Logistic Regression as part of our Machine Learning and Artificial Intelligence for Kids course. We have realized that giving kids and teens these skills at a young age makes them data-driven in their approach to world issues and solutions.

In this blog, we have covered the steps required to build a logistic regression model. This model is easy to create and the workflow remains the same. Now you can try this out with other datasets available on kaggle, datahub or earth data. You can try image classification, text classification using the same workflow. To take the models into next level with more accuracy you can use deep learning and neural networks.