How to use free datasets in python using pydataset library.

This blog is a tutorial to use pydataset library in python to access free datasets. It also talks about how to use its methods to perform data analysis and visualization. In today’s time, more than 60% of the data scientists and developers use the Python programming language as a tool for data science and machine learning. The usage of this language is expected to increase in the future. There are a huge number of datasets available. Therefore, looking for datasets over the web is time consuming and tedious. To solve this problem, the pydataset library was introduced. This collates all the available datasets for a user-friendly experience. Having a pydataset library in python was influenced from R programming language which has its in-built rdatasets.

This tutorial provides information on how to access built-in datasets to use it for data analysis and visualization. Using the pydataset library makes it easy to access datasets. It also saves time and allows hassle free experience to perform data analytics and machine learning algorithms. It is a collection of publicly available datasets and has approximately 700 datasets. Pydataset library loads the data as a dataframe structure. Dataframe structure is the arrangement of data in a tabular format. Datasets can be loaded and used with a few lines of code. Now that we have understood the importance of this library, let’s look into how to use this library.

2. Chose an appropriate file to download based on your operation system i.e., Windows, Mac or Linux.

3. Once the latest Python version is downloaded, install Python using the prompts. If you are on Windows, make sure to tick the option “Add Python to path”.

Follow the steps given below in case you don’t have it installed.

1. If you are using the windows operating system, open command prompt and if you are on a Mac, open the terminal to type in the below command.

2. Type ‘’pip install jupyter’’ to install Jupyter notebook. Once it is installed, successfully installed message will show up.

3. In order to use the notebook, open command prompt or terminal based on your operating system and type ''jupyter notebook''.

Now we have our system environment ready to install and use the pydataset library.

In order to use the free inbuilt datasets available in Python, we need to install the library using the command given below.

If you are using the windows operating system, open command prompt and type the command given below. If you are on a Mac, open the terminal to type in the below command.

Don’t forget to try out the code on your computer as you read this blog to get hands-on experience.

To start with, you can use jupyter notebook to work on the basics of data analytics. Jupyter notebook is an interactive web tool which will allow you to view the result of the code inline. There is no dependency on other parts of the code as you can run it cell by cell. For huge datasets, Jupyterlab can be used, which is the latest web based interactive development environment. In Jupyterlab, csv data can be viewed in a much more organized manner as it loads the data in a tabular format just like excel unlike jupyter notebook which loads csv files as text files.

1. All available datasets are loaded by calling an in-built function of the module. This displays all the datasets available in this library. It returns a dataframe containing the dataset id and title. 2. To view the names of the first few datasets from the package, use the code given below. data().head(n)  #loads the title and id of first n datasets 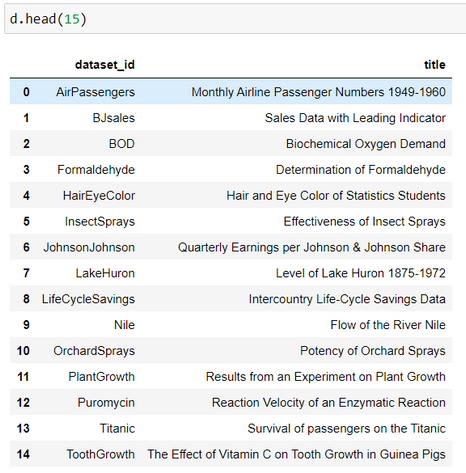 3. To view the names of the last few datasets from the package. data().tail(n)   #loads the title and id of last n datasets Create a dataset object to load the required data. The dataset is loaded in a pandas dataframe structure. Exploring data analytics, visualization and machine learning is easier using pydataset library as pydataset does not require you to read a csv file or other files such as json, excel using read_csv method in pandas.

Here, we will be using the titanic dataset as an example. Display the column names of the loaded dataset

This returns a list of column names. Columns present in a dataset describe the data and are metadata. Theoretically, metadata is known as "data of data”. Metadata is of great importance and is significant in data science as it allows us to understand the data better. This in turn helps us to read the data better, perform efficient machine learning algorithms and build models. For example, the titanic dataset contains columns such as age, gender, etc. which allows us to understand the collection of data better. So, choosing appropriate columns for modeling is a primary requirement.

Display the data of a specific column Print the data type of all the columns from a dataset Find all the basic information about the dataset

1. To view the total number of values in the dataset, the number of null values and the data type of each column, use the code given below: 2. To find the statistical data of the numerical columns:

describe method helps us to determine the maximum, minimum, mean, median, quartiles and standard deviation for all the numerical columns of the data.

Here, we are using the BOD dataset as an example. 3. To find the statistical data of categorical columns:

Plotting graphs using the data is the key for data visualization. Using this library gives an upper hand, as datasets are loaded in a pandas dataframe directly which will allow you to visualize data. So, it is a good idea to use this library. 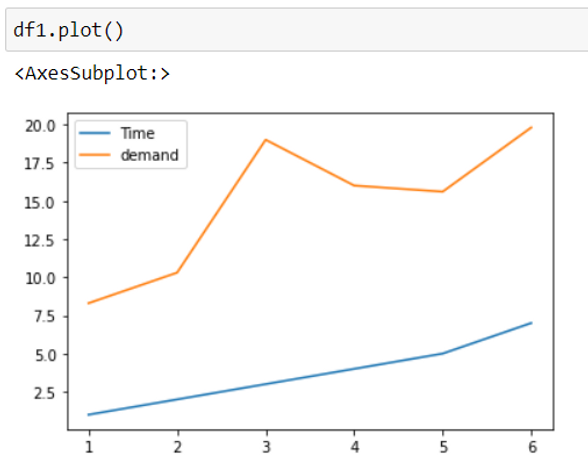 Time column will be represented on the x-axis and demand will be on the y-axis.

You can import numpy and pandas library as well to perform data mining and cleaning using these free-datasets.

Use the link given below to view the Python source code for all the examples in a IPython Notebook:

Publicly available datasets are also found in a few other libraries which you can explore. Examples of such libraries include seaborn, scikit-learn, statsmodel, nltk libraries.