Different types of motors used by makers and hobbyists

What is a motor and what are the types of motors used by makers and hobbyists for their projects? Read this blog to know more… 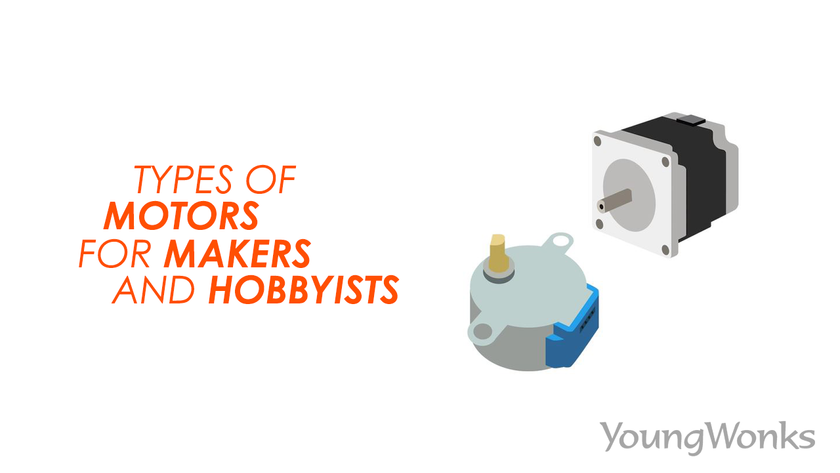 What is a motor and what are the different types of motors? In an age where more and more tasks are getting automated, the above question is only too relevant to ignore. After all, a plethora of appliances out there make use of the electric motor. In this blog, we shall be mainly looking at the different types of motors that are used by hobbyists and makers in their projects.

What is a motor?

So first let’s look at what the term motor means. A motor or an electric motor is an electrical machine that converts electrical energy into mechanical energy. Going by this definition, any appliance that moves or has moving parts and runs on electricity would have a motor in it. From fans, hair dryers and washing machines to drills, blenders, microwaves and refrigerators, they all have electric motors fitted in them.

Even cars, including those that aren’t hybrid or electric, contain many small electric motors to run the fans, windshield wipers, fluid pumps and other items, not to mention the starter motor. Similarly, battery-powered toys and hobby items also use electric motors, as do small power tools. Industrial uses include blowers, machines and power tools, fans and pumps. Hobbyists, on the other hand, use motors in relatively smaller applications that require movement such as robotics or modules with wheels.

So how do these motors operate? Most electric motors function through the interaction between the motor’s magnetic field and electric current in a wire winding to produce force in the form of rotation of a shaft.

In this blog, we shall look at the types of motors that are mainly used by hobbyists and makers in their projects.

One of the simplest kinds of motors, brushed DC motors are probably the most popular type of motor out there. They can be found in various sizes from tiny motors for miniature devices to large industrial motors. They are used in several appliances - be it hand-held fans, cell phone buzzers, or cordless drills. In fact, these motors are used to run real cars, trains and automobiles, and not just the toy ones!

They use contact brushes that connect with a commutator to alter current direction. Basically, the brushes rub on a segmented copper ring this makes the current through the armature coils alternate even as the motor spins.

They are cost effective to produce, lightweight and easy to control, fairly efficient and have excellent torque at low speeds. On the downside, not only do the commutator brushes produce a rather audible whine, brushed DC motors generate a lot of electrical noise that can interfere with other circuitry and lead to other problems.

On the other hand, brushless DC motors use permanent magnets in their rotor assembly and are thus mechanically much simpler than brushed motors. Here the brushes and accompanying noise and sparks make way for a silent switch of the current flow which in turn drives the motor.

These quiet motors are used in computer fans, disk drives, electric vehicles and high-precision servomechanisms. This is why they are in demand in the hobby market for aircraft, multicopters, drones, radio control vehicles, industrial servos, hybrid vehicles and ground vehicle applications.

They typically score high on efficiency, need less maintenance, produce less noise and have higher power density than brushed DC motors. And while they can also be mass-produced, their disadvantages include dependence on specialized regulators, controllers and gearboxes which often lead to a higher capital cost.

DC motors that move in discrete steps are called stepper motors. They have several coils that are organized in groups called phases. As each phase gets energized in sequence, the motor rotates, one step at a time. In fact, using a computer controlled stepping, one can get very precise positioning.

Available in various sizes, shapes and electromechanical specifications, these motors are known for their precise speed control and their repeatable positioning ability. This is why stepper motors are the preferred type of motor for several precision motion control applications such as 3D printers, camera platforms, X,Y plotters and precision gearmotors. Some other devices one can find stepper motors include clocks, robots and CNC (computer numerical control) machines.

Stepper motors allow for speed control too and this makes them ideal choices in the fields of automation and robotics. Also, while regular DC motors don’t have very much torque at low speeds, stepper motors have maximum torque at low speeds and excellent ‘holding torque’ to maintain position, so they are good bets for applications that need low speed with high precision.

However, stepper motors are not the most efficient motors around and they are likely to need an encoder or limit switch to set a reference position; they can also miss steps if overloaded.

Yet another popular hobby market motor is the servo motor that can push or rotate an object with great precision and is thus quite useful for projects that need precise control of angular or linear position, velocity and acceleration. If you need to rotate and object at some specific angles or distance, then you use a servo motor. It is made up of a simple motor that runs through the servo mechanism.

The servo mechanism comprises three parts; first is the controlled device, second is the output sensor and lastly, the feedback system. In this closed loop system, a positive feedback system is used to control motion and the final position of the shaft. The device is controlled by a feedback signal produced by comparing output signal and reference input signal.

Popularly used across remote control applications like drones, media players, robots and toy cars, servo motors typically consist of suitable motors hooked up to sensors for position feedback and relatively sophisticated controllers, often designed specifically for use with these servo motors. Servos can be either AC or DC. While AC servos can deal with higher current surges and are used for industrial machinery, DC servos are for smaller hobbyist applications. The gears inside the servo convert the output with slower rotation speed but with more torque. This produces a large amount of force for a short period of time. And since servo motors can offer this high torque despite being small and lightweight, they are also found in toy cars, robots, remote-controlled helicopters and planes.

If you work with servo motors, you may be interested in this blog about using a Raspberry Pi Pico with a servo motor: https://www.youngwonks.com/blog/How-to-use-a-servo-motor-with-the-Raspberry-Pi-Pico.

There are three main types of servo motors:

Positional rotation servo motor: This motor rotates within a 180° range and thus cannot turn outside its preset limits. It is used mainly in limited-range applications such as moving levers or steering linkages.

Continuous rotation servo motor: As the name suggests, these motors can turn in any direction independently and continuously, so even though levers are often used on standard servos, wheels and gears become more useful here.

Linear servo motor: This motor is quite similar to the positional rotation servo, except for the fact that it has more gears. It doesn’t move in a cirucle and instead uses a rack and pinion mechanism to change the output back and forth. This servo is rare, but is used in larger hobby planes and robots.

Stepper motors come with built-in output steps which lend them the ability to control position. This makes them a good choice when it comes to open-loop position control, without any feedback encoder. Also, stepper motors are typically cheaper and there is no need to tune the controller on a closed loop stepper system.

On the other hand, a servo motor immediately moves to the angle instructed by the controller, irrespective of the earlier position at power up. In fact, the absence of feedback of a stepper motor constrains its performance, since such a motor can only take a load within its capacity. This means that missed steps under too much load can cause positioning errors and the system under a stepper motor might need to be restarted.

Servo motors, meanwhile, are usually used as a high-performance option to the stepper motor. Of course, the encoder and controller are an extra cost one has to incur with the servo motor, but they also optimise the performance of the overall system (be it speed, power or accuracy). So in larger systems, where powerful motors take up a bigger portion of the system cost, servo motors tend to have an edge.

Several applications, including laser cutting machines, are available in two price groups, with the low-cost range using stepper motors and servo motors being used in the high-performance range.