Which are the leading game development engines in the market today? Our latest blog post brings you a comprehensive list

Which game development engines are dominating the market today? Our blogpost tells you more… 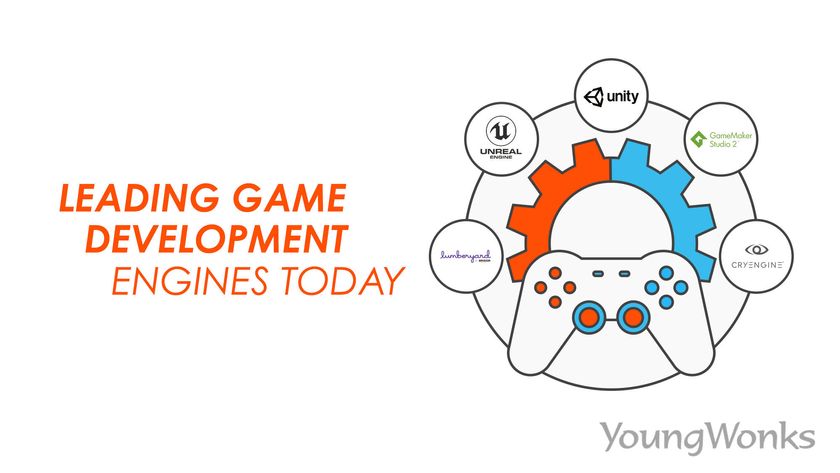 Game engines are tools used by game designers to code and plan out a game quickly and easily without building one from the ground up. Whether they are 2D games or 3D games, they offer tools to help with asset creation and placement.

So these engines are basically the architecture that game developers rely on to run the video game. A typical game engine allows developers to incorporate the following elements in the game: input, rendering, scripting, collision detection, artificial intelligence and more. In other words, game engines are reusable parts that developers can use to build the framework of the game. This gives them more time to focus on the unique aspects such as character models, textures, objects communicating with each other, etc. Without these game development engines, games would have to be built from scratch and would thus take longer and be more difficult to make. So these game engines actually simplify game design.

Below are some of the leading game development engines out there this year; we have shared them in the alphabetical order:

Built by Amazon, Amazon Lumberyard is free, powerful and fully customizable. It also offers full integration with AWS aka Amazon Web Services. This makes it fairly easy to use Amazon Lumberyard to make a game needing online play (although AWS services come at a price). The good news is that if you are a fan of multiplayer games, Lumberyard has the tools for you. Lumberyard comes with a Getting Started Guide video series which breaks down the process of building one’s first game prototype with the engine. This is why many start-ups and indie studios - along with Amazon Game Studios, of course - choose to work with it. For more information, visit: https://aws.amazon.com/lumberyard/.

An easy to learn game development engine, AppGameKit is perfect for beginners, hobbyists & independent developers. AppGameKit is a good bet for quickly coding and creating apps and sharing them across platforms. The rapid iteration and cross-platform sharing lends itself well to mobile game development, and also makes it compatible with most platforms - think iPhones and iPads, Linux, HTML5 browsers, Raspberry Pi, Mac OS, Windows and Android. At a price of $79.97, AppGameKit comes with options to club the base product with add-ons, such as the Visual Editor, thus allowing the developer to save money on both products. However, given the availability of many free engines, this one doesn't win any points on the pricing front. For more information, visit: https://www.appgamekit.com/.

CryEngine is a free engine with a royalties system. The first $5,000 of annual revenue per project is royalty-free, after which one has to pay a 5 percent royalty to Crytek. A visually stunning engine with amazing graphics and life-like characters, one can use CryEngine to create games for several different platforms such as Xbox One, PlayStation 4, Windows PC and Oculus Rift. This means that CryEngine is ideal for those looking at virtual reality game creation. CryEngine also offers lots of free learning resources - be it tutorials, forums, or the documentation required to get started. Its features include high quality visuals, efficient suite of tools, combining AI (Artificial Intelligence) with animation and more. There is a lot to be learnt here and YouTube and the official CryEngine website are your main guiding lights here. For more information, visit: https://www.cryengine.com/.

A series of cross-platform game engines built by Mark Overmars in 1999 and developed by YoYo Games since 2007, GameMaker has been widely used since one didn’t really need a lot of programming knowledge to be able to use it; users just needed to ‘point-and-click’ to build games. In fact, users can create entire games by using a drag-and-drop interface. Recent versions of software however, appeal to advanced developers too; the latest iteration is GameMaker Studio 2, that was released in 2017. One of its key advantages today is that here one can use a single development workflow and export one’s game directly to a Windows desktop, Mac OS X, Ubuntu, Android, iOS, tvOS, fireTV, Android TV, Microsoft UWP, HTML5, PlayStation 4, and Xbox One. This compatibility with multiple platforms is a big asset.

Games made with GameMaker include Jet Lancer, Ministry of Broadcast and Hyper Light Drifter, among others. There is a free version available on a 30-day trial but of course, one will need the paid version to get more. For more information, visit: https://www.yoyogames.com/gamemaker.

Offering a comprehensive huge set of common tools, Godot allows one to concentrate on just making one’s game without having to start things from scratch. Moreover, it is completely free and open-source under the MIT license and their website proclaims that their offerings come with no strings attached. This means no royalties, no subscription fees, so that you get to own your game is yours, down to the last line of engine code. Ideal for making both 2D and 3D games targeting PC, mobile and web platforms, Godot’s development environment runs on several operating systems including Linux, macOS, and Windows. Godot also boasts a strong community that devotes its resources towards fixing bugs and developing new features. Additionally, Godot has its own built-in scripting language, GDScript; it is a high-level, dynamically typed programming language that is syntactically similar to Python. For more information, visit: https://godotengine.org/.

A Java game development framework, libGDX offers one unified API (Application Programming Interface) that runs across all supported platforms. This feature in turn makes it a good choice for cross-platform development; the platform being targeted doesn’t matter here anymore, whether it is Windows, iOS, Linux, or Mac OS. libGDX also lets one run and debug one’s game on our own desktop. This paves the way for quick iterations of one’s game and easy and quick testing of the changes (now that there’s no need to move to iOS/Android etc. to test the changes). The libGDX community is quite strong too and there is no dearth of tutorials for getting started and subsequent development with libGDX. Also worth a mention is the source guide which has demos and examples. For more information, visit https://libgdx.badlogicgames.com/.

Aiming to democratize the business of making games, RPG Maker claims it doesn’t discriminate against any game maker, even if they do not know anything about game programming. The software has been designed accordingly so one can actually make an entire game, from start to finish using RPG Maker instead of using a programming language. The easy-to-use interface allows one to customize every aspect of the game. While there are several RPG Maker products, the RPG Maker MV is priced at $79.99; there’s also a free trial option for Windows users. Users who do not know Javascript will be limited to only what the engine offers, but those who do know this coding language can change the game to suit their preference, be it Battles or Menu UIs (User Interfaces). For more information, visit: https://www.rpgmakerweb.com/.

Unity is a multi-platform game engine that allows one to make one's own game using interactive 3D content with considerable ease. It is known for its excellent functionality, high-quality content, and versatility, i.e. the ability to be used for any type of game and hence deserves a place in the list of best game engines today. Games made with Unity include Lara Croft Go, Her Story, Pillars of Eternity, and Kerbal Space Program. While the Personal Edition for individual use is free for download, the Plus Edition for businesses, which has several brilliant features, costs a monthly fee. The features on offer include access to the latest version of the Core platform, customizable splash screens and real-time diagnostics in addition to dark theme User Interface and live-ops analytics, etc. Moreover, game makers can develop and sell user-generated assets (including sprites) to other game makers using the Unity Asset Store. For more information, visit: https://unity.com/.

Developed by Epic Games, Unreal Engine is a widely used game engine. The original version was released in 1998 and over the years, it has continued to remain popular. The USP of the Unreal Engine is its flexibility; it allows for the development of games into unique experiences. The latest version, Unreal Engine 4, is said to be the easiest one to use for game development professionals. New designers may have to start with other engines and work their way up before working with Unreal Engine. Games created using Unreal Engine are supported on platforms such as Microsoft Windows, MacOS, Linux, SteamOS, HTML5, iOS, Android, Nintendo Switch, PlayStation 4, Xbox One, Magic Leap One, Oculus Rift and Google Daydream among others. A popular game made using Unreal Engine would be Fortnite, which was a big hit even on American video live streaming service Twitch upon its release in 2017. Unreal Engine 4, which was launched in 2014, follows a subscription model where it can be downloaded for free (its source code is available on GitHub). Use in commercial products brings royalty into play, typically Epic Games charges developers 5 percent of revenues from sales. Epic has announced Unreal Engine 5 to be shipped in the first half of 2022. For more information, visit: https://www.unrealengine.com/.

A free lightweight, cross-platform 2D and 3D game engine implemented in C++, Urho3D has been released under the MIT license. The Urho3D wiki page on GitHub shares all that one will need to get started. To begin with, there’s a set of How-To Guides for the following OSes: Windows with Visual Studio, Windows with MinGW, Android and Linux. There’s also a complete list of features shared on the website, including the version in which those features were first implemented. In addition to the thorough discussion on many topics - developing basic material effects for rendering is also addressed here- on the forum, there are walkthroughs for working on one’s first project. Currently on version 1.7, Urho3D has an actively contributing community. The downside has been made rather obvious on the page as well: the main one being that one needs to be fairly proficient in C++ for performance-critical code and working on areas such as networking, physics, and animation. For more information, visit: https://github.com/urho3d/Urho3D/wiki.

If you wish to check out leading Python frameworks for game development, check out blog here: https://www.youngwonks.com/blog/Top-Python-Frameworks-for-Game-Development.