Which are the leading Python frameworks being used today for building games? We tell you in this blog post 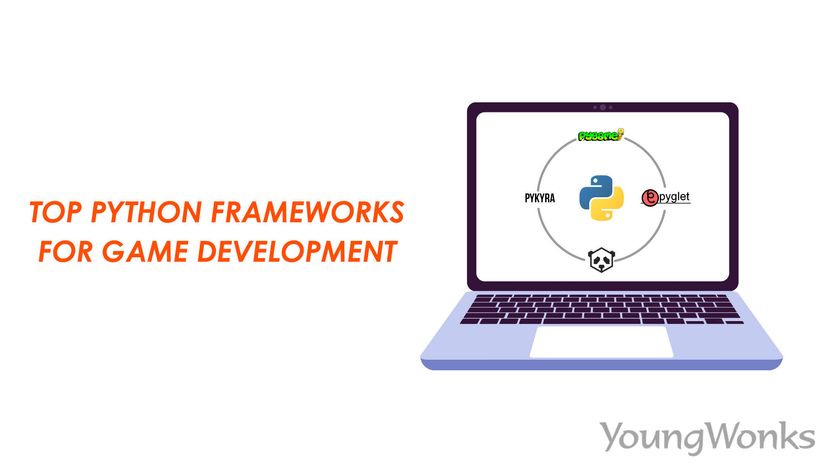 So which are the leading Python frameworks for game development this year? Shared below are the top names:

Pygame uses the Simple DirectMedia Layer (SDL) library thereby facilitating real-time computer game development without the low-level mechanics of the C programming language and its derivatives. Applications using Pygame can run on Android phones and tablets with the use of Pygame Subset for Android. Pygame also enjoys the support of a strong community that has created many tutorials for those wanting to work with it.

Also used for Python game development and other visually-rich applications on multiple operating systems is Pyglet. This is a powerful open-source, cross-platform windowing and multimedia library that can support user interface event handling, windowed and full-screen operations, multiple monitors, graphics from the library OpenGL, joysticks, loading images and videos, and audio playback. Pyglet runs under Python 3.5+ and does not come with external dependencies or a need for installation.

Running on Microsoft Windows, Mac OS X, and Linux and released under BSD Licence, it basically offers an object-oriented application programming interface for building games and other multimedia applications.

Panda3D is a free-to-use engine that is used for building real time 3D games, visualizations, simulations, and experiments. It includes graphics, audio, I/O, collision detection, and other abilities that come in handy for making 3D games. It is an open source software under the revised BSD license.

Written in Python and C++, it boasts the advantages afforded by the former language, such as rapid development and advanced memory management, even as it includes command-line tools for processing and optimizing the source code. What also helps is that Panda3D supports several popular third-party libraries, such as the Bullet physics engine, OpenAL, Assimp model loader, and FMOD sound libraries.

The users of Panda3D are typically the developers of commercial games, a few open source projects, and several university courses that capitalize on Panda3D's short learning curve. The community may be small but it is quite active.

Based on both Software and Documentation Localisation (SDL) and the Kyra engine, PyKyra is said to be among the fastest Python game development frameworks. Not only does it support the standard features of the Kyra framework, but it also supports MPEG video, direct image reading, sounds such as MP3, Ogg Vorbis, Wav, Multichannel module files and more.

Moreover, it supports side symmetric and top-down translations. Here users can divide the screen into the sub-window views, and each view has its own object transformation. It also helps that Kyra engine is fast and is equipped with specialized coded algorithms used for rendering the updates.

Kivy is an open-source and cross-platform Python library that runs on Linux, Windows, OS X, Android, iOS, and Raspberry Pi. It comes with multi-touch apps; in fact, it has more than 20 widgets that can be easily extended. Moreover, it can natively use most inputs, protocols and devices including WM_Touch, WM_Pen, Mtdev, Linux Kernel HID, Mac OS X Trackpad and Magic Mouse, and TUIO. Used for the rapid development of applications and software, it is a stable framework that comes with a fully documented API and a programming guide to help users use it well.

PyOpenGL is a cross-platform Python binding for graphics library OpenGL and related Application Programming Interfaces (APIs). The binding is built using the standard ctypes library, and is provided under an extremely liberal BSD-style Open-Source license. It is interoperable with many external GUI libraries for Python such as PyGame, PyQt, Raw XLib, and more.

Python-Ogre / PyOgre is a Python binding of a C++ library for the Ogre 3D rendering engine, which has an impressive feature set and has been used to create impressive games. So essentially, PyOgre comprises two libraries: Ogre3d and CEGUi, an embedded GUI system. PyOgre is a cross-platform library that runs under Windows and Linux, and boasts both speed and flexibility.

The Cocos2d community has a few independent editors who have contributed in areas such as SpriteSheet editing, particle editing, font editing and Tilemap editing as well as world editors including SpriteBuilder and CocoStudio.

Ren’Py is an open-source and cross-platform engine written in Python and Cython (Cython code is written mostly in Python with optional additional C-inspired syntax and designed to give C-like performance). Built on Pygame, it’s a free software game engine which is used for creating visual novels. With the help of this engine, one can combine words, images, and sounds for making visuals and life simulation games. It also supports Python scripting language thus enabling developers to work with complex game logic, and runs on almost every computer system.

Developers working with Ren'Py can create branching stories, save file systems, rollback to previous points in the story and carry out many scene transitions too. The engine also enables movie playback for both full-screen movies and animated sprites.