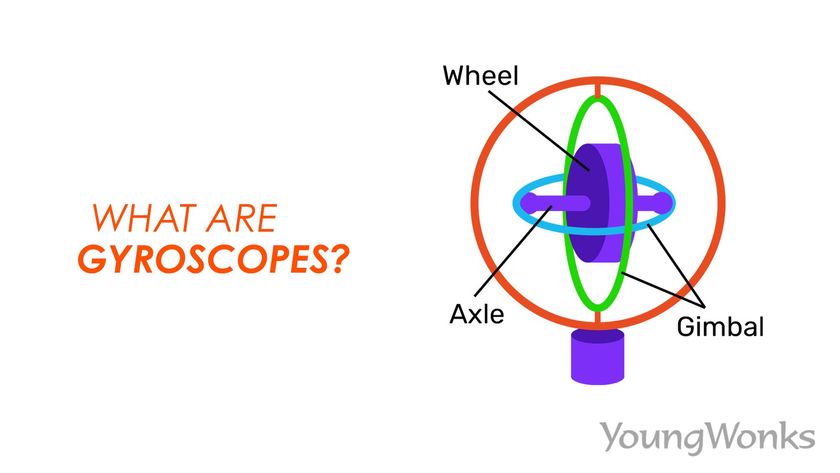 During the filming of the speeder bike chase scene in the movie Return of the Jedi, a steadicam - aka camera stabilizer - rig was used along with two gyroscopes for extra stabilization.

b. In Heading indicators:

The directional gyro may not seek out north, but a gyrocompass does. It does so by detecting the rotation of the earth about its axis and then seeking the true north, instead of the magnetic north. Usually, they have built-in damping to prevent overshoot when re-calibrating from sudden movement.

Gyroscopes are also used along with accelerometers, which are used to measure proper acceleration. It is important to note here that measuring an object’s acceleration and integrating over time, the velocity of the object can be arrived at. Integrating again, the object’s position can be determined. While a simple accelerometer consists of a weight that can freely move horizontally, a more complicated design comprises a gyroscope with a weight on one of the axes. (For more information about accelerometers, check out our blog on accelerometers.

Given the fact that the gyroscope helps calculate orientation and rotation and is used for maintaining a reference direction or providing stability in navigation, designers have incorporated them into modern technology. In addition to being used in compasses, aircraft, computer pointing devices, gyroscopes are now also used in consumer electronics. The Apple iPhone gyroscope was one of the first gyro sensors that have come to be commonly used in smartphones. In fact, Apple founder Steve Jobs was the first one to popularize the usage or application of the gyroscope in consumer electronics. Moreover, a few features of Android phones - think PhotoSphere or 360 Camera and VR feature - cannot work without a gyroscope sensor in the phone.

It is the gyro sensor in our smartphones that senses angular rotational velocity and acceleration. This is what makes it possible for us to play using motion senses in our phones, tablets. Similarly, the smartphone’s gyroscope helps us watch 360-degree videos or photos. When we move our phone, the photo or the video moves due to the presence of a tiny gyroscope in the phone.

Gyroscopes are also used in toys, in fact there are toy gyroscopes which make for great educational tools as they help kids understand how gyroscopes work.

Electric powered flywheel gyroscopes inserted in bicycle wheels are said to be a good alternative to training wheels.

Cruise ships use gyroscopes for leveling motion-sensitive devices such as self-leveling pool tables.