What is an Accelerometer, How Does It Work and Where Is It Used Today

This blog offers a quick introduction to accelerometers, how they work and their applications...

Read on to know about accelerometers, their variants and myriad uses today 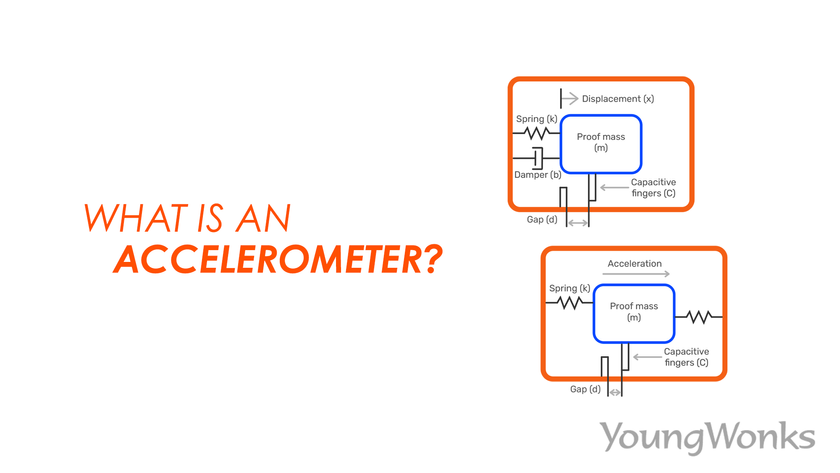 What is an accelerometer?

To put it simply, an accelerometer is a tool used to measure acceleration. So what is acceleration? Acceleration refers to the rate of change of the velocity of an object with respect to time.

In other words, acceleration = Force / mass

So acceleration is the amount of force we need to move each unit of mass.

How does an accelerometer work?

Let us take an example to understand this better. We know that acceleration can be arrived at if we know the amount of force and the amount of mass. Now if there’s a car that accelerates from a standstill to a speed (or, rather velocity) of 100km/h in 5 seconds, the acceleration is the change in velocity or speed divided by the time—so 100/5 or 20 km/h per second.

So for example, if one is sitting in the back seat of a car and the driver accelerates suddenly, you will find yourself thrown ahead and then back into your seat. This happens because the car’s acceleration makes it move forward suddenly. And even though it appears that one is moving backward upon the car accelerating forward, the reality is that the car is trying to move ahead and you in your seat are catching up from the back.

There are many types of accelerometers; let us look at them one by one.

A mechanical accelerometer is a scaled-down version of passengers sitting in cars shifting back and forth even as forces act on them. Such an accelerometer has a mass attached to a spring suspended inside an outer casing. When it accelerates, the casing moves off right away but the mass stays behind and the spring stretches with a force in tandem with the acceleration. The distance the spring stretches (which is proportional to the stretching force) is used to measure the force and the acceleration in many ways. In fact, seismometers used to measure earthquakes function in this manner; pens on heavy masses are attached to springs so as to register earthquake forces. When an earthquake strikes, it shakes the seismometer cabinet but the pen (attached to a mass) takes longer to move, leaving a jerky trace on a paper chart.

Today, there are many modern takes on the accelerometer; essentially electronic sensors measuring the acceleration forces acting on an object, so as to calculate the object’s position in space and monitor the object’s movement. These accelerometers calculate force by generating electrical or magnetic signals and not by making a pen trace on paper. Take for instance, the piezoresistive accelerometer.

Here the mass is attached to a potentiometer (variable resistor), like a volume control. The potentiometer turns the electric current up or down as per the size of the force acting on it. Piezoresistive accelerometers increase their resistance in proportion to the amount of pressure applied. Better suited to vehicle crash testing, they are far less sensitive than piezoelectric accelerometers.

Piezoelectric accelerometers use the piezoelectric effect (piezoelectric materials generate electricity when put under physical stress) to detect change in acceleration. For instance, quartz is a piezoelectric crystal and when it is attached to a mass, the movement of the accelerometer causes the mass to squeeze the crystal, in turn producing a tiny electric voltage. Such accelerometers are usually used in vibration and shock measurement.

Capacitive accelerometers are those that use capacitors to measure force. So if a moving mass changes the distance between two metal plates, measuring the change in their capacitance indicates the amount of acting force.

Most accelerometers today are miniscule, and thus called Micro-Electro-Mechanical Systems (MEMS) accelerometers. Thanks to their size and affordability, they have become even more popular and are now embedded in a wide array of hand-held electronic devices such as phones, tablets, and video game controllers. In phones and tablets, the accelerometer helps flip the screen when the device is rotated. They are typically used with gyroscopes (https://www.youngwonks.com/blog/What-is-a-Gyroscope-and-How-Does-It-Work). While a simple accelerometer consists of a weight that can freely move horizontally, a more complicated design comprises a gyroscope with a weight on one of the axes.

Other uses include in engineering, where accelerometers can be used to measure vibration on cars, machines, buildings, process control systems and safety installations. Accelerometers are commonly used as part of their experiments, especially collision experiments. They can also be used to calculate / monitor seismic activity, inclination, machine vibration, dynamic distance and speed with or without the influence of gravity.

Accelerometers are also used to track the movement of humans (think fitness bands, sports watches and step counters) and by zoologists to track movements of animals in the wild.

Since they can help measure the motion and vibration of any object/ structure, accelerometers are useful in building and construction work. So they are used to detect changes in driving piles, demolition work, drilling and excavation, moving loads on bridges, impact loads, wind gusts, concussion loads, air blast pressure and avoiding the following: vehicle collisions, falling debris, collapse of structural elements, loss of support because of ground failure.

Today, they also have medical applications: automated external defibrillators today have an accelerometer component which helps measure the depth of CPR chest compressions. This is besides used to measure strike force in physical training.

Other uses include sound recording, where the accelerometer detects changes in the acceleration caused by oscillations in air pressure.

Many laptops have accelerometers built-in, they help detect drops. In such laptops, as soon as a drop is detected, the heads of the hard disk are parked to avoid data loss and possible disk damage.