What is an electro-optical sensor?

What is an electro-optical sensor, how does it work and what are its varied applications today?

An introduction to electro-optical sensors, how they function, their key applications, strengths and limitations 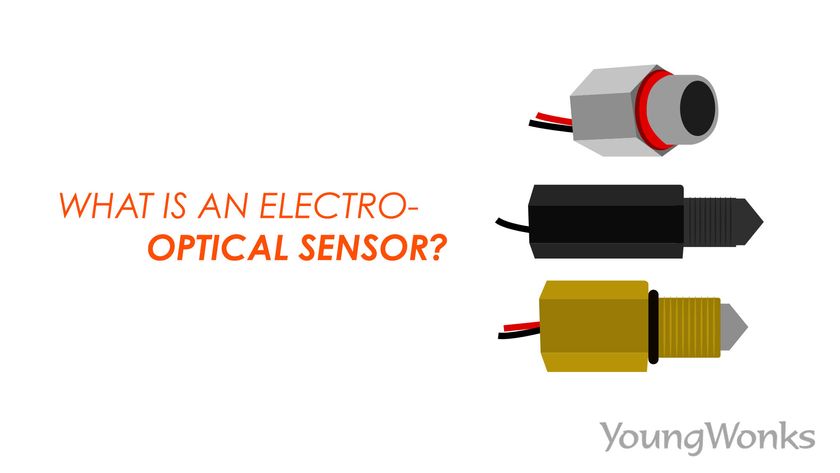 What is an electro-optical sensor?

Optical sensor systems are used in many industries and in consumer applications. For instance, flash detection and synchronising one photographic flash to another; lights that switch on on their own in response to darkness/ dimness; position sensors that get activated upon the interruption of a light beam by an object; and photoelectric sensors that can tell the absence or presence and distance of an object.

How does an electro-optical sensor work?

An electro-optical sensor (EO sensor) takes light rays and converts them into electronic signals. It basically measures the physical amount of light and then turns it into a form that can be read by an instrument. Such an optical sensor is typically part of a bigger system that brings together a source of light, a measuring device and the optical sensor; with the latter connected to an electrical trigger. The trigger then responds to a change in the signal within the light sensor and the optical sensor tracks and measures the changes from one or many light beams.

Typically, the electro-optic sensor has an infrared LED and a light receiver. Light from the LED is directed into a prism which forms the tip of the sensor. With no liquid present, light from the LED gets reflected within the prism to the receiver. When the prism is immersed by the rising liquid, the light is refracted out into the liquid, which means little or no light reaches the receiver. Detecting this change, the receiver actuates electronic switching within the unit to operate an external alarm or control circuit.

In simpler words, the light sensor acts as a photoelectric trigger and either increases or decreases the electrical output. The optical switch -  an optoelectronic device that can be integrated with integrated or discrete microelectronic circuits - allows signals in optical fibres or integrated optical circuits to be switched selectively from one circuit to another. These optical switches can function by mechanical means or through electro-optic effects, magneto-optic effects in addition to other methods.

There are many different kinds of optical sensors and / switches available today, but the most common types are as follows:

Also known as solar cells, photovoltaics convert an amount of incident light into an output voltage.

Photodiodes convert an amount of incident light into an output current.

A phototransistor is a bipolar transistor where the base-collector junction is exposed to light. This means that phototransistors behave the same way as photodiodes, but with an internal gain.

A point sensor operates on a single point, whereas a distributed sensor functions over an array or a distribution of points.

Wherever and whenever light has to be converted into energy, electro-optical sensors can be used. Today, there are many areas that require light to be converted into energy, so electro-optical sensor-based detection systems are being used almost everywhere. Some of the most common applications would be smartphones and computers where screen brightness is adjusted using sensors, and smartwatches, where sensors are used to measure the user’s heartbeat/ steps. Ambient light sensors help extend the battery life of mobile phones and enable easy-to-view displays that are optimised for the environment.

Optical sensors are also found in metrology and the energy industry to monitor structures that generate, distribute and convert electrical power. They are popularly used for monitoring wind turbine blades, offshore platforms and power lines and can be found in oil and gas applications (including pipeline monitoring), where optical sensor-based liquid level indicators are used.

Civil and transportation projects too rely on them - right from monitoring bridges and airport landing strips to monitoring dams, railways and even ship hulls. Examples of their biomedical applications include their use in medical instruments, especially in breath analysers where breath is analysed using a tunable diode laser and optical heart-rate monitors that measure one’s heart rate using light.

Optical switches are used for calibration of the concentration of different compounds by both visible and infrared spectroscopy and in motion detectors. In fact, electro-optical sensors are a key component of EO/IR aka electro-optical / infrared systems found in unmanned aerial vehicles; these are high resolution imaging systems used for military or law enforcement applications that include both visible and infrared sensors (the latter nowadays come with lower infrared pixel size). Since they span both visible and infrared wavelengths, EO/IR systems also use thermal imaging and go on to offer complete and even real-time situational awareness, including night-vision and in low light conditions. This is also why optical sensors have found use in the robotics and aerospace industry; here too, the imaging sensors deliver thanks to their enhancement: they use the visible and infrared spectral bands to provide spherical situational awareness, long-range precision targeting, better spectral response (aka better sensitivity of the photosensor to optical radiation of various wavelengths), protection from infrared-guided missiles and the ability to remote sense satellites.

Other applications include imaging purposes (for eg. copy machines), quality and process control applications, light automation (eg, light fixtures that come on automatically in the dark) and alarm systems.

It is important to note that optical sensors work well only when the correct type is used for the application. This ensures that the sensor maintains its sensitivity to the property it measures.

The advent of Microoptoelectromechanical systems (MOEMS), also known as optical MEMS, has also paved the way for the increasing popularity of electrooptical sensors. MEMS are essentially integrations of mechanical, optical, and electrical systems that are centred around sensing or manipulating optical signals at a very small size.  Moreover, a 2020 news article even reports about a breakthrough optical sensor that mimics the human eye; this is said to be a key step toward better AI.

Electro-optical sensors come with many advantages aka strengths, which is why they are being used across industries today. In this section, we take a look at their key strengths:

Electro-optical sensors also have a few limitations. In this section, we look at them: