What is an infrared sensor?

What is an infrared sensor, how does it work and what are its varied applications today?

An introduction to infrared sensors, how they function, their key applications, strengths and limitations 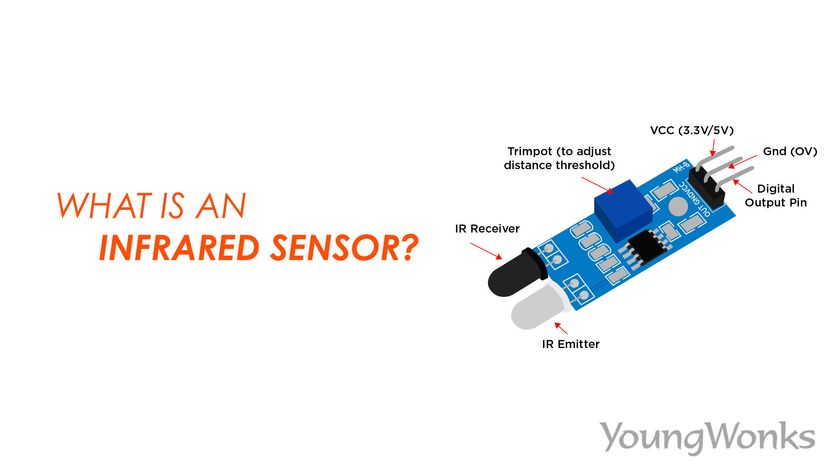 What is an infrared sensor?

An infrared (IR) sensor is an electronic device used to measure and detect infrared radiation in its surrounding environment. What then is infrared radiation? Infrared radiation - also known as infrared light - refers to electromagnetic radiation that has wavelengths longer than those of visible light. In fact, it is said to encompass wavelengths from around 1 millimeter to around 700 nanometers (the nominal red edge of the visible spectrum). It is thus invisible to the human eye but can be detected as a sensation of warmth on the skin.

Infrared radiation (IR) was accidentally discovered by the astronomer William Herschel in the year 1800. As he calculated the temperature of each color of light (separated by a prism), Herschel observed that the temperature just beyond the red light was highest. It is important to note that although the infrared wavelength is longer than that of visible light, it is very much on the same electromagnetic spectrum. Anything that sends out heat - basically has a temperature above around five degrees Kelvin - gives off infrared radiation.

Active infrared sensors emit and detect infrared radiation. They have two parts: there’s a light emitting diode (LED) and a receiver. When an object comes close to the sensor, the infrared light from the LED bounces off of the object and is detected by the receiver. Active IR sensors thus behave as proximity sensors, and are commonly used in obstacle detection systems such as robots.

Passive infrared sensors, on the other hand, only detect infrared radiation; they do not emit it from an LED. Passive infrared sensors (PIR) are made up of the following components: two strips of pyroelectric material (a pyroelectric sensor); an infrared filter to block out all other wavelengths of light; a fresnel lens that collects light from several angles into a single point; and a housing unit to protect the sensor from other environmental variables, such as temperature and humidity. PIR sensors are mainly used in PIR-based motion detectors.

How does an infrared sensor work?

An infrared sensor works the same way an object detection sensor does. The sensor typically has an IR LED & an IR photodiode, and combining these two gives way to a photo-coupler or optocoupler.

The IR LED is basically a transmitter emitting IR radiations; it looks similar to a standard LED. And since the radiation it generates is not cannot be seen by the human eye; the radiation is detected by infrared receivers which are available in photodiodes form.

After the infrared transmitter has produced an emission, it arrives at the object & some of the emission bounces or reflects back towards the infrared receiver. Based on the intensity of the response, the sensor output is decided by the IR receiver.

Today, IR sensors are used in many areas, all of which tap into their myriad applications. For instance, the speed sensor is used to synchronize the speed of multiple motors. The temperature sensor is used for industrial temperature control. Passive infrared sensors, aka PIR sensors, are used in  automatic door opening systems, while ultrasonic sensors are used for measuring distances.

Apart from being used in sensor-based projects, IR sensors are used in a wide range of appliances/ electronic devices as mentioned below.

Even though infrared radiation cannot be seen, it is emitted by water, rocks, soil, vegetation, the atmosphere and even human tissue. Thermal infrared detectors can measure these radiations in the IR range and share the temperature distributions of the object/area on an image.

IR sensors are used in radiation thermometers that are used for measuring the temperature of a body based on its emitted thermal radiation. These thermometers are used mainly due to their ability to measure temperature without direct contact with the object, quicker response times and easy pattern measurements.

They are used for detecting the light emitted from the flames and to see how the flames are burning.

Moisture analyzers have an infrared weighing and heating unit which uses wavelengths absorbed by the moisture to arrive at the levels of moisture in the given sample.

The above devices in turn are used in areas such as meteorology, climatology, photo-bio modulation, water/ gas analysis, testing anesthesiology, petroleum exploration and rail safety. Moreover, with PIR-based sensors being used for motion detection, even security alarms and automatic lighting applications have come to reply on IR sensors. Additionally, infrared technology today is used for remote controls and even in fiber-optic cables.

Infrared sensors afford many advantages, which is why they are widely used today. Let us look at the advantanages:

Infrared sensors also come with some disadvantages. Let’s look at them here:

How we use infrared sensors at YoungWonks Coding School to teach Computer Science and Engineering:

Students then utilize this knowledge and add infrared sensors to the robot RC car they build. Infrared sensors are used to make the RC car collision avoiding.

Students also use infrared sensors in the YoungWonks Level 3 Advanced Programming Curriculum for Kids to practically understand the concept of multithreading. They try to make the robot RC car collision avoiding using infrared sensors and navigable using computer keyboard keys at the same time. They realize their program can achieve only one of the two unless they use multithreading.

Those interested in knowing more about the YoungWonks Advanced Computer Science and Engineering Programs for Kids and Teens, can visit YoungWonks.com and schedule a free trial class for coding.